Rode 86 miles today with Dan, Nick and the guys on the CTC ride, pretty much tripling my longest ride. While Im proud of myself for doing it, I was 14 miles short of my first century ride. I guess Im obligated to go to the ride next week

And there’s even evidence… 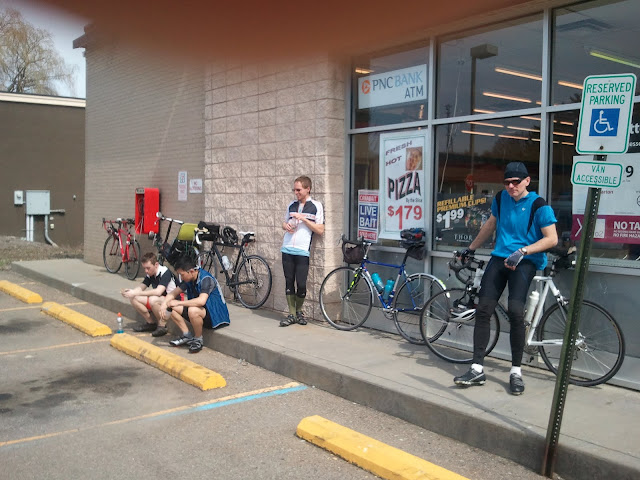 Left to right: Kyle, Nick, Bill, and Mike, chillin’ at the Warrendale 7-11. Everyone’s still smiling, ’cause we haven’t yet begun our long series of tube repairs…

Left to right… and Dan at top.

No women? I should do the next ride

Ps what was your avg speed?

@Nate: The occluding thumb is a time-honored photographic technique, indicating hand craftsmanship and a personal touch. Far be it from me to buck tradition.

@Stef: Around 15 mph. C’mon out: next week will be something overly dramatic in the 120-mile range.

I was coaching a soccer game out in Burgettstown and a group of about 15 roadies went rolling by the field, I thought might have been some folks from here, but y’all were off in another direction. Everybody had their wheeled conveyances out today. Except me.

Sorry dude. The jail trail and south side trails were crowded at some points with bikes (unfortunately quite a few people had their saddles way too low and they were swerving, but good for them for getting out)

btw, what is that prime looking beer in your avatar?

It was a great day, had a nice leisurely ~20mi ride with my wife and AGAIN forgot that Klavon’s is closed on Sunday.

I saw two jackasses (grey haired dudes, not even those damn kids) tooling around on the SS trail yapping on their cellphones… WTF?