I didn’t know that map was available and had no idea the Mountour trail was so accesible from McKeesport.

rsprake – I didn’t even realize the Montour trail went that far. I thought it was just a “West End” thing. That is awesome.

It only sort-of goes that far – they placed the legend pretty strategically to block the big missing part of trail. there are 3 pretty big gaps between there and library rd.

but, i might have to look into that – it might work out to just about a century if you rode down there, then the entire Montour trail, return via Neville Island.

oh… glad I learned that before giving it a go – thank you!

Dear Salty, you refer to what some call The Montour Loop – start at Montour MP0 in Groveton, ride the Montour full length, ride the on-road connection to the GAP, take the GAP north to Station Square, back on the road with 51 North and Neville Island (to skip large hills), back to the mainland in Coraopolis, 51 South to the starting point.

I believe it’s 80-something miles.

All the gaps on the eastern portion of the Montour have on-road detours that are safe and fairly easy (a few short climbs, one or two steep). For that matter, the on-road Clairton connector has some short climbs too, and it’s considered finished.

The Montour is not like the GAP. You can ride the whole Montour today, safely and with no trespassing or railroad ballast (though there are some gravel parking lots and such). Don’t let “unfinished” deter you from riding it.

Are the detours marked?

what’s the surface like? is it crushed limestone for the whole way?

The first three detours have signs. The Triphammer Road to Snowden Road detour now has map boxes at each end. (Take a map and return it to the box at the far end.) For the other two, there weren’t any map boxes yet, as of a month or so ago, and probably insufficient signage to navigate it unaided.

So it’s a good idea to print out the bypass page from the Montour site and bring it with you, or bring a map for that area with the bike paths marked. The detours are all on Google’s bike view.

@rsprake: The detours were unmarked the last time I did the loop. (I went town->McKeesport->Clairton->trail->Coraopolis for my loop…never gone the other direction). The detour info posted on the Montour Trail website was pretty good, though.

The detours may be marked but it’s still easy to make a mistake if you’re unfamiliar with the area. The most confusing bits are the approaches to Rt. 51. It’s easy enough once you’ve done it, but you initially have to puzzle out stuff like the funereal home. I would strongly suggest printing off copies of the trail map. Checking out the detours on satellite view is also a good idea.

The trail is mostly limestone through it dwindles down to dirt on some stretches. There’s an asphalt section somewhere in the middle. The on-road parts are fine.

I personally like the Montour a whole lot due to the variety; you travel through many different landscapes and run into all kinds of people. By contrast the GAP can be deathly boring: forest, more forest and finally some more forest. (Okay, with an occasional glimpse of the river.) On the other hand I’ve haven’t been much past Ohiopyle so maybe it gets more interesting out east.

I get what you mean Ahlir, it just take me longer to get bored with forest. Like I’m not sure it’s happened yet.

Still, if the road parts are nice, and it’s well marked, that’s good to know, thank you guys.

Don’t get me wrong: I love forests. Thing is, I’d much prefer to hike through them than to ride through them.

I finally made it out to try out the new trail, rode from the waterfront to mckeesport and it was very nice! I’m stoked to ride the full distance now. I might try to do am out and back camp overnight at ohiopyle one of these weekends.

Man, when they finish it, those condos at the waterfront should advertise hard to cyclists. Being able to get to downtown or the southside from your back porch with no roads would be kinda sweet.

Being able to get to downtown or the southside from your back porch with no roads would be kinda sweet.

And it’s pancake flat. Pretty hard to find that ’round these parts.

Being able to get to downtown or the southside from your back porch with no roads would be kinda sweet.

The houses on Herr’s Island (by the 31st Street Bridge) also have direct trail access from their porches. Do many cyclists live there?

Also: the track along the ballast is a bit less pleasant; the ground is disturbed and the stone is loose. I ended up having to walk part of the way.

I either worked up more courage after riding what feels like a long distance on worse terrain to get from where the millvale trail ends to sharpsburg (and then on to the waterworks) or there is more of a path in the area in the pics above, but I can say that I don’t have to walk anymore! A few weeks ago I was proud of myself for just going at it and not eating shit on my way to the sandcastle parking lot. Now I woulnt do it on my road bike with skinnier, wussier tires. But the key is that you Just have to keep pedaling and let the bike move under you on big stones like this.

@Ahlir Is the fence in the elevated section of the new trail installed permanently?

Any construction equipment there?

It’s hard to see what’s going on up top since the embankment is pretty steep and close to the railway. On the other hand they’ve spayed grass seed on the slope so maybe the site prep is finished and the next stage is paving.

@stefb: yeah, the right way to do it is to use a low gear and just keep plowing through.

Not low gear. Medium/high and momentum. Get some speed, stand up, stay loose and let the bike move around and over things as it wants to. You just worry about keeping your core balanced and keeping up your speed. Way easier than granny gearing it and plowing into the rocks. Same as a rock garden in the woods.

ah, I didn’t mean that kind of low gear, I meant something that gives you sufficient torque to get up and over rocks. And I agree that you need to keep your speed up, otherwise you just sink into the ballast. My mistake yesterday was to forget to get off my large ring. Your mileage may vary.

If you are doing it right you don’t need to power over the rocks.

so much to learn…

Example: much bigger bike and rocks, but same technique.

It’s good to see more trail progress. Do you think they will be done by the predicted 11/11/11?

this makes me excited!

Does anyone knows what is happening with the GAP gap? 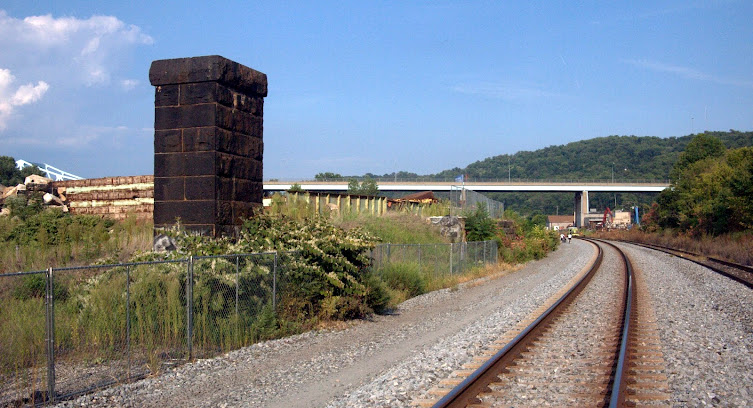 The knotweed is making better progress than the humans are, that’s for sure.

They can’t build the Sandcastle part until Sandcastle closes for the year on September 3rd, and I guess they’re going to do the Keystone section at the same time.

I believe the knotweed is operating without the benefit of an agreement with the property owners, accounting for its quick progress.

With any luck we’ll see construction equipment in such photos next month.

Yep over 1 year later…all to show for it… increased vegetative growth.

I frequently go through this section…can’t wait for it to be finished!

that is just down right embarrassing.

What’s embarrassing (to me) is the non-existent to disfunctional wayfinding support offered to transient bicyclists.

Quite often you meet bicyclists riding to/from DC who are either disoriented in McKeesport, flummoxed at Keystone Metals, or have spend a pointless hour on the McKeesport Loop.

I have heard it’s for insurance reasons that they can’t have maps or any other information along the route. I suggested bike pgh maps and some detour info be posted at the Pump House.

The routing in McKeesport has been changing, so they may be reluctant to add a bunch more signs until it’s stable. (They changed the routing around 11th Street a few years ago, and they’re currently moving it off the Lysle Blvd sidewalk and onto 4th Street.)

We can create short redirecting URLs to something like ridewithgps, google maps, or something similar with route discription, then print both URL and QR-code and put it somewhere in McKeesport trails. So at least people with smart phones would be covered.

Remember that just because no construction has happened, it doesn’t mean no one is working on this. There is a lot to work out on paper, behind the scenes, and a tremendous amount of patience and tenacity has been required. The GAP has taken 20+ years to build, imagine how the folks finishing this last section feel. Believe me, everyone wants this done.

Check out the steel valley trail newsletter linked below. There’s a little bit of construction update and lots of other info.