Google still shows the exit from the Jail Trail to Bates. I miss it.

In scoping out vantage points for the downtown cordon (bike) count on Wednesday, I found therse:

First one is of a bike cop on Seventh Avenue in front of the Byham, the second is a sidewalk rider on Penn Avenue approahing 11th.

Ugh, I can’t seem to get the Street View to pop up nicely for this cyclist, but he’s riding along the TRHT between the Casino and then under the WE Bridge. You can see how excited he is to see the Google Mapping vehicle (I’m guessing it’s a guy on a bike with a specially adapted camera?). If you follow them along the trail, he takes pictures of the GMV with his cell phone and then follows the GMV and talks to the operator as they travel together. Kinda interesting.

RustyRed wrote:Ugh, I can’t seem to get the Street View to pop up nicely for this cyclist, but he’s riding along the TRHT between the Casino and then under the WE Bridge.

That is so cool!

Best if you start east of the WE bridge.

It funny how for part of the ride, the “bicyclist” is just a disembodied head and helmet, because of the way google merges pictures.

In looking at that segment along the trail, there was one old picture which showed the blue plastic structure (an outdoor classroom) in the CSC parking lot.
It was removed at least 3 years ago.

@ Helen S It was removed at least 3 years ago.

Since there’s still plenty of trails (and roads) that aren’t on Streetview at all yet, we can’t expect that updating the views they have to be a high priority.

i think it was swalfoort that originally found this one, but it’s soooo good it needs to be reposted.

@ erok – oddly enough, if you back out to the map and try to find those guys again, they aren’t there.

dude looking for bike parking in the strip

Here’s one I found last night of someone climbing South 18th Street in front of Ultimate Auto (just above Saber Park in case my link doesn’t work right). The rider is visible when viewed coming down the hill or on a side view, but disappears if you try to find him in the uphill view.

The uphill ‘he’s there’ downhill ‘he’s not.’ has to do with when they ran the car, at least sometimes. Sometimes the view in opposing directions shows wildly different weather, for example.

It is always fun to play around with these images…
front, back, approach from a side street, etc.

on the photo erok reposted, i was trying to get a look at the adjoining public steps.

Such a pleasant unexpected surprise lol

Me and my son in North Point Breeze a couple of months ago.

@bhattenb: I might be missing something, but why is you son’s face pixilated and yours is not? Do you fail the “human face” test?

I do. Luckily my son has his mother’s good looks. 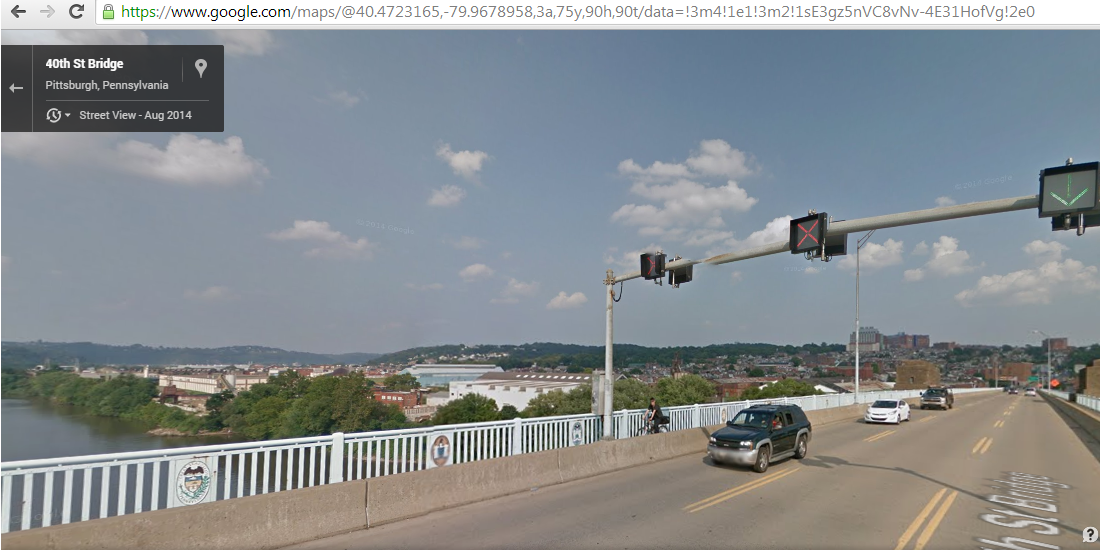 Found this one on Penn Avenue in the Strip today: 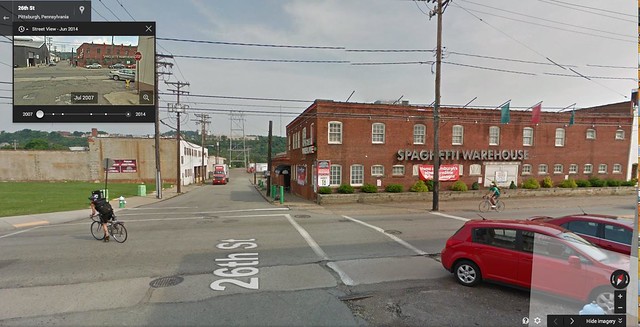 Joncaire Street, near base of stairs….woman in pink.

And if you take about two steps towards the Junction Hollow trail, there is a dude – in pink!

One step farther and you can see them start to cross paths!

And the woman in pink continues to fo0llow the Google van.

This is like a romance – as portrayed in Portlandia!

@swalfoort and @Mick:
That’s another 2-fer! 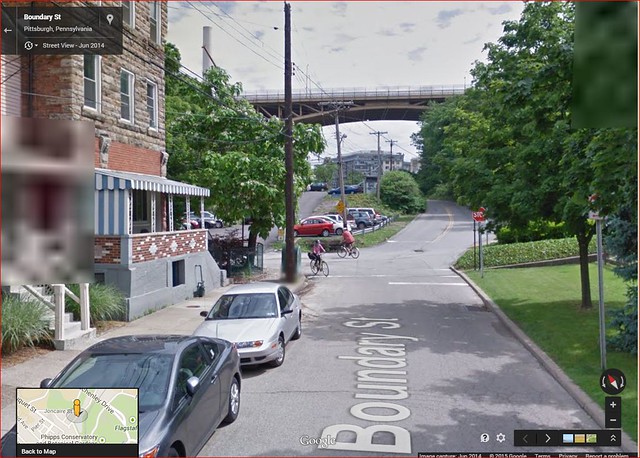 This german shepard seems unfazed by the google car:

Nice- No hands turn into oncoming traffic (or just a lazy left cutting across?). Is that a beverage can in the right hand?

@helen that is indeed a can in his right hand

While looking for myself on northbound Stanwix and Third Ave (a couple months ago I noticed that the Google Maps car was behind me), I found this guy turning left from southbound Stanwix into BOTA:

This Grown and Sexy cyclist:

Not surprising a cyclist was captured making the wiggle onto Spring Way at 16th St, as that’s about the only logical place to go once getting to the end of the bike lane.

Hahaha, I forgot about this game too. Back in October, I was at the intersection of Commonwealth Place and Liberty near the Point, intending to make a left onto the Blvd, when I saw the Google car coming the opposite direction and turning off onto Liberty. I made a mental note to check Street View later, but as all my mental notes tend to go…it just flew right out of my brain. :)

This reminded me to check again, so there I am, with my Raleigh:
https://goo.gl/maps/gWBMjdPczby

Here’s a different head-on view of you:

Not on a bike, but here’s the City’s Bike/Ped Coordinator on Smithfield St

Am I overdoing this, or do people want moar?

Pedicab at work in December!

Keep ’em coming, Ornoth! I love them. Who doesn’t like photos of cyclists on City Streets? (Ok, who on this board?)