@stu – Thanks for posting the video – we couldn’t get on the bridge when we set the tag as it was still under construction last evening. We had to shoot from the walkway. I’m anxious to ride over and see it in person too.

My method is to mentally pick out about 3 or 4 tag ideas in various parts of town, go home, check the map to make sure they haven’t already been taken, then in the unlikely event that I grab a tag, I can get the drop picture in the same trip as the pickup picture. I might also pick up a couple of extra possibilities as backups. But since I am always racing the clock and other riders to process a tag, I can’t get too picky. *mild grouse about yinz with portable Internet while I’m still using a nine-year-old flip phone*

I also found it useful to have a collection of candidates in mind. And to snap several pics along the way so as to have the luxury to think about which shot worked best…

I also made a point to not post on the spot, but get back to a “real” computer and pick the best shot and usually do some cropping. So now I have to figure out a smartphone editor app. Sigh.

But the game seems to have gone up a level, what with all that “team” stuff.

Anyway, I’ll want to get back in the game, in a month or so.

somewhere twixt here and there 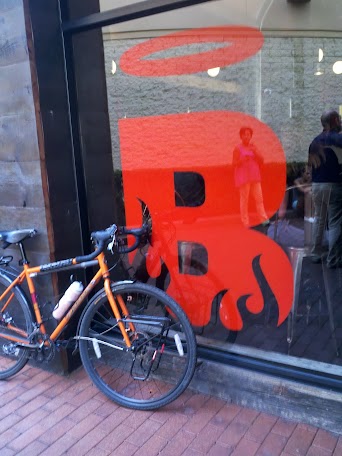 Just as a follow-up to the first video, here is the sidewalk on the downstream side of the bridge.

This wasn’t too easy to get to. Plus, I already have had dinner when I got there :/

Ahlir – yes, get back in the game! Team tagging is fun.

So, upon checking the Tag-o-rama map, I was shocked that this location hasn’t been tagged yet, specially since it is between a major trail & a major road used for commuting around the City. However, the building in particular where this marker is located is uber-recognizable, so instead of taking a pic of it, I took a pic of this little unassuming marker by it.

If this is not enough of a clue, maybe the few words I captured in the tree dedication will be a better hint…. :)

Srsly? No takers?
This one is easy! Like stealing candy from a kid ;)

With melange and b.s
@ the Allegheny county jail 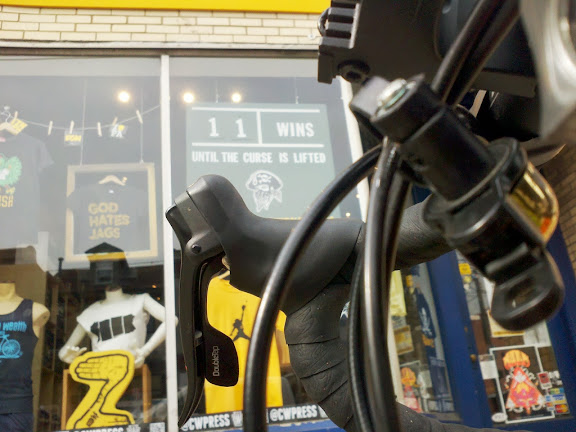 its open once a week,, and is a leafy place for ppl to meet.
come one, come all, bring the tall, bring the small.
it’s here for now, so enjoy the time,
gone before long, the sun will no longer shine.

It was a bit wet to get there this morning, but VOILA!
Shadyside Nursery!

This should be an easy one! If you like to take shortcuts that are abit hilly, let’s say, taking the hypotenuse to go from A to B in a triangle, you’ve probably seen this sculpture before! if not, I dream that you’ll still figure it out :)

Extra hint: this area of town is seldom tagged, so I’m just giving it some love!

That was a wonderful tag! Let’s have more of those: fascinating subject, out in plain sight, in an out of the way place.

Do we have any insight on what this is, what was the idea behind it, how long it’s been there, etc.?

I have no idea what it means, but I can tell you, it’s been there since I came to Pgh in the 90’s

Ha!
Actually, the sculpture looks more like a concrete-version of one of Thadeus Mosley’s sculptures. However he works on wood.

WAIT!!!
I was right! IT IS a Thadeus Mosley sculpture!!!!!
Just did a google search, and yes, the sculpture, in limestone, is called “Mountaintop”.

I got to meet him once when in college since he’s good friends to one of my ex-professors there, and knew of his other sculpture (in wood) up by the Hill House, however didn’t know he was also the artists for this.

Haha, I’m glad you figured it out. You are much more cultured than I am. Well, that’s the beauty of this game, and it’s a shame more people aren’t regulars. Were it not for this game, I wouldn’t know about the octopus’s garden, Randyland, Snoopy’s doghouse, and a bunch of things that were so new, even we beat the media to reporting about them.

I think about some of the tags I’ve set — “BANK”, hopscotch poetry, the 10-foot “at” sign — and hope I’ve enlightened everyone playing to some of the cool stuff and fascinating history around this town, most easily accessible by bike!

I feel the same way Stu! I love discovering new places by others! And also share my findings :)

A sweet tag for you commuters,
You pass by this every day,
It’s known to every Pgh’er,
It might help you if I say,
That for some reason I can’t quite place,
This tag reminds me of this poem by Joyce:
” Three quarks for Muster Mark!
Sure he hasn’t got much of a bark
And sure any he has it’s all beside the mark.” Tonight strip it down for the underwear ride, seeing this picture I didn’t know the golden triangle was known for it’s pizza.
I guess some small Italian man thought so.
NEW TAG Yo, steeld55 – I’m wondering what part of your bike is in the picture – the purple stuff?

that’s a pedal, if i’m not mistaken. (have to admit, thought it was some weird bike club thing at first…)

This tag is of a place (building) that I’ve wanted to tag for quite some time for the mere fact that I think is funny given its context…. what does it look like? I can only describe it as a “70’s spaceship wedged in the city”.

Now, it isn’t located in a very typical bike route, however if you practice the art of busing your bike for commuting sometimes, you’ve probably seen it. Just puck around across for it.

Oh, and if you’re looking for this in Google Maps, be warned that its current paint job is different….

This if why you turn off your cellphones, the man said,
No need to shout
You’ll pass by this tomorrow,
It’s on the route. Children’s museum, north side.
Feeling pink with our bike PGh volunteer tshirts aboard our bikes. With TD After we picked up the Northside tag, we rode ’round and ’round looking for a new place to tag… this is all we could come up with. 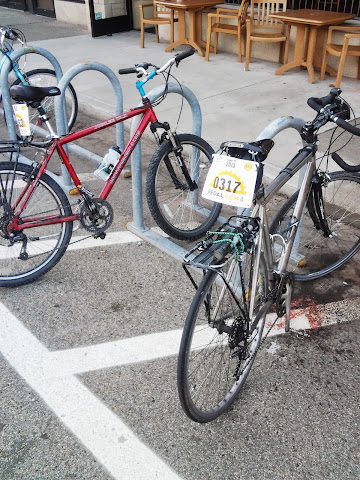 (with my son Peter)