enhancement dadburnit! I was amused to smear the paint tool over all the words and hints. FAIL!

It’s on a reasonable cycling route, I know I’ve bicycled past it numerous times, but I didn’t recognize the picture. I probably won’t ride there tonight, especially if it keeps drizzling. But, then, now I know about the tacos…

I couldn’t read the sign in the first post, or in Nate’s. I could read through the paint brush tool though, at least in a few places. When someone grabs the tag I’ll post the modified photo. Blur filters can be reversed, information buried in a 90% opacity brush can be recovered. Your best bet is to delete pixels in the region you are trying to hide, or paint over it with a 100% opacity brush. A while back some government outfit released a bunch of documents with censored information blacked out with black boxes. Turns out they just took a PDF file and overlaid black boxes that you could simply delete and read all the text still behind them.

I can’t wait until someone gets this, I have to find out about the taco’s.

Blur filters can be reversed, information buried in a 90% opacity brush can be recovered.

In a “flattened” image file? Do tell?? (oh please share your blur/brush removing secrets! – or is it a really, really technical solution?)

The reviews of those tacos sure sound good. Alas, the time doesn’t suit for a taco run until Saturday.

Yea, in a flattened file. I’ll send you a PM.

I’d go get this in the am but still clueless. Ragged edge?

The edge of the bike pgh map as indicated on our tag map. It is a main road in the area.

I’m not going to spill the beans, but a taco isn’t the food item you might expect on that road.

The original bike map is different than the current version with different boundaries.

The boundaries I am using is the blue line on our tag map in google maps.

Really, Steven? PM me and tell me what you’re thinking, because I don’t personally know of any other restaurants…. oh. Never mind.

/me walks away muttering. God that was cheesy.

Cheesy? Are you saying you didn’t relish my hint? I didn’t mean to make you sauer.

The current blue line on the Google map for this game is based on the version 2 bike map. It shows the region that’s fully visible on the printed map.

The printed map covers an even wider area at the sides, but there are informative boxes almost completely covering those sections, so I didn’t include them in the blue outline. (There’s a 100 foot stretch of I-79 in Heidelberg that’s technically visible on the bike map, for instance, in the little strip between the list of bike resources and the edge of the paper.)

The map’s just a guideline anyway. The rules don’t require keeping to the map (though if you drop a tag in Altoona, people may be cross).

Duh. I wasn’t looking on the right side of the line. Instinctively I knew though.

Must you pepper all your replies with bad puns?

Ok, now I’m confused. I just looked at Stephen’s map and the bounding line is now a rectangle, without the cutouts for information boxes. What happened?

In any case, the current tag is actually outside the bounds (though way closer to Pittsburgh than to Altoona).

Oops. Did I give it away?

Originally the blue lines were based on the version 1 printed map. Excluding the different-sized information boxes left an irregular region with some areas that stuck out more than others.

A few weeks ago I redraw the blue lines to match the version 2 map. The result was rectangular, since the new information boxes are all the same width.

Must you pepper all your replies with bad puns?

It’s either that or tedious map construction narratives like this.

Not to worry, though. Soon someone will ride out there and grab the tag. I mayo go for it myself, though it’s a bit chili this evening, just to try to catchup.

Speaking quite frankly, I didn’t want to test the rush hour traffic this am. Not a familiar route for me.

BTW, while perusing the t-o-r map I discovered that my original estimate of the distance to the taco place was way off. It’s actually more like a couple of miles. Still worth it, though.

Oh and please, no more puns.

Tomorrow’s date (05 May) is perfect for tacos and cervezas! This would make a fun group get.

I would be willing to do a group ride to get it after work this evening..if others know where it is. I swear I have driven past this building, but ii can’t place it. I do have an idea of which direction it is but I didn’t feel like putting the time in to street viewing that entire road. I probably wouldn’t be available until 6 or 630pm though.

Group expedition sounds great, esp. on May 5, but I’m committed to driving to Coraopolis this evening. Very sad.

Eh well I may not be able to do this until later because of an emergent surgery this afternoon.

i wonder if a group ride would lead to someone hot-dogging and racing ahead while the rest of us try to catchup. Finally someone got it!

So where is the taco place?

taco place –> Rey Azteca. You need to keep going to where Rodi Road comes up; it’s on the left.

I like it because it serves the kind of Mexican food you might find in the south, near the border. (Well, in my experience.)

threadjack for the taco fans:::: last time I ate at the taco stand in front of Reyna foods in the strip, the guy said they’re going to put a restaurant in the adjacent basement soon (where there was a diner for a while, then I think a jamaican place). 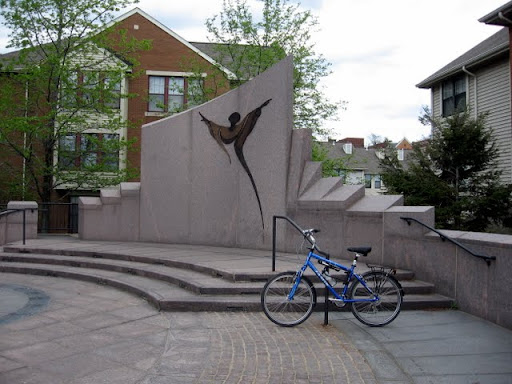 Since I had nothing left to lose, I just pushed my bike up the hill.

Haha, that’s a funny clue! I was thinking about using this spot for a tag, but you’ve beat me to it!

I think I know where this is. Might have to grab it in the morning.

If it’s where I think it is, then Kris or Gordon or Janis told me, but it’s free. I might be able to grab this on my way to the Keg Ride, but will certainly be bruced by the time I get near a computer.

Freedom corner near the Mellon arena.

Phew. Had a few beers on the keg ride. Went straight to my head.

Ps, peaceturkey helped with the tag too. That is her bike on the right.

Awwww I was gonna get it after leaving the brewery. Good job

I think I use to be a car dealership.

What a nice day for a ride!

I this this is still Ellsworth and Lamont way In. Shadyside. Trek store is off to the right.

Our tag didn’t last very long! Today was the first time I participated in tag o rama. You guys and gals are awesome! It’s great to be a part of this. It’s just fabulous how you all embraced Jason’s idea!

It really is a fun game. This was just a block or two past my usual route home, so it was convenient. It got pretty windy on my way home from the brewery. It got dark then sunny then sunny with rain. Weird spring Pittsburgh weather.