@ jonawebb From the look of things there were some projects there some time ago which were torn down and fenced off, like the ones in Arlington Heights.

That’s good to know. I might be looking to buy a cheap house in Pittsburgh and reclaqimed neighborhoods are good to know of.

Someone showed me a house in “West Oakland” – just towards town from Treees Hall. I didn’t want to drive through there even. When I was young, no one went to that neighborhood, unless they needed painkillers – and they didn’t have a prescription.

Still, you have to be careful of going into people’s yardes and taking pictures.

@mick, there was nothing to indicate it was somebody’s yard. A house used to be there, but it had been torn down, leaving behind sidewalk etc.

@jonawebb there was nothing to indicate it was somebody’s yard.

You’re thinking the lawn mowed itself?

@mick Grass was pretty long and there was junk around so it didn’t exactly look like somebody had ownership. I don’t know who mowed it but somebody seems to take care of these things sometimes. The areas that got fenced off after the projects were torn down at Arlington Heights and, I guess, this place, also get mowed by somebody.

> You’re thinking the lawn mowed itself?

“i wish my lawn was emo, because then it would cut itself”

i, for one, appreciate the long tag — it means i missed fewer opportunities while i was cycling on rentals and bikeshares in europe last week.

Umm I climbed mountain and have been tooling around in the area. Can’t find the houses. Can find the approximate view, but this is kinda lame… I bet I am close but it is getting dark and won’t matter if I get there anyway. It will be too dark for the pic to come out

I hope someone gets this. I may make another attempt tomorrow with more light. I did go right past where It is believed to be, but I failed to see it. Maybe a bike with gears will make for a more pleasant trip up 18th tomorrow.

Gosh. You might need to consult Pliny for help.

D’oh. So I was about 1/2 block away from the tag. I looked down that Way and didn’t recognize it as being the tag. I was standing on that corner when I called cburch and was like “I CANT FUCKING FIND IT! I AM GETTING OUT OF THE GHETTO AND GOING FOR A RIDE”. Whoops.

Edit: it still looks like someone’s back yard, even on street view. I imagined some big empty lot adjacent to it.

At some yard near the corner of Engstler and Pliny way. Mt Oliver.

Thank you, Stef! I broke a brake cable on my way into town yesterday, or I might’ve gotten it.

If I keep doing these untagged tags I’m going to make the clues easier. Still learning the game.

Good job Stef. That’s a hell of thing – go up that hill TWICE for one tag.

I think the clue had to do with St Clair. Although, as far as I can see, you are right – it’s mt oliver. 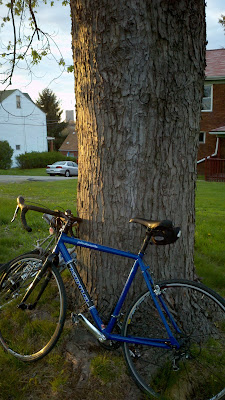 randy, bruce, and i saw stef a few a few minutes after she took her picture in that persons backyard. i cursed at her a little for beating us there (purely for the lulz, stef, dont hate me) — though she totally deserves it for doing that hill twice on her single speed with a bag over her shoulder.

@jonawebb: maybe next time you could drop the name of the street in one of your clues.

Hey some people live on top of that hill. I would hate to have 18tj street as part of my commute home. Ugh. I crawl up that street on that bike at like 9mph.

I should have taken a picture of the sign… Like I said, the sign on fisher between mountain and engstler (about a half block from this tag) said mt Oliver. There were street signs in the area that said “st Claire” above the street names, but they were not where this tag was. Very confusing.

The part of Fisher Street west of Mountain is Mt. Oliver, according to the city. Maybe the sign was facing east, to indicate to people headed west that they were about to enter Mt. Oliver? Or maybe the sign was announcing a “Mt. Oliver Neighborhood Watch” area or similar (which could surely extend outside the neighborhood’s official boundaries)? Or else maybe the city division that puts up signs doesn’t talk to the city division that maintains the maps.

Google maps has a hidden feature where is you search on a neighborhood, say “St Clair, Pittsburgh”, it shows the border in dashed outline.

Btw 9 mph up 18th is pretty impressive. I’m all about gears.

It feel very slow going up that long hill. The sign was facing east. It was east of mountain. It is a neighborhood watch sign, which can be seen on street view but not readable. No matter..

I am sure that this place is popular around Halloween. People of all ages strip down to their underoos, dress up and become someone else for a night. I think capt America replaced lady gaga recently. The mad hatter is still there.

Heh…nice tag. I worked there, many years ago. Fun place.

I’ll be two blocks from this in about 10 minutes without my bike. Unless I can put my mother on my handlebars.

I would like to see a picture of that.

Another reason to slam the stem…more room for Mom.

I had Cops on the other night, apparently riding on the bars (or I guess anywhere) is illegal because there has to be the appropriate number of seats for the number of riders on the bike. Way to legislate fun out of everything!

Costume World in the strip

damn, i knew i shouldve gone for it this morning

This tag is outside!

Too far north and too far east.

Hope this is OK…

But it looks to be

for getting a tag.

Also poboy was there so

she knows where it is!

Ah I have never been inside this place before but I know where it is. someone had better get this soon… I am planning an early ride tomorrow…

I don’t know. Every weekend one of two things happens: I set an alarm, but I turn it off cause I realize I am too tired and need more sleep. In this scenario, no pets wake me up or try to keep me up one the alarm goes off. In the other scenario, I decide that I do need to sleep in and don’t set an alarm. This is when the dogs wake me up at 5am and won’t leave me alone until I take them out. So we’ll see what happens haha

I have a migraine, so I hope someone gets out to get it this morning before it rains today.

Uh, I think you got east in the clue wrong, I was assuming Cheswick or something. I might have gone for this.

@abracadabra – Too far north, yes. Too far east, nah, unless east is west. Outside of the box, but oh well, an easy-to-get-to tag, no big deal. ;-p

poyboy told me she rode over 500 miles in March – wow!