Corner of Columbus Ave and Fulton in Manchester/Columbus square project. 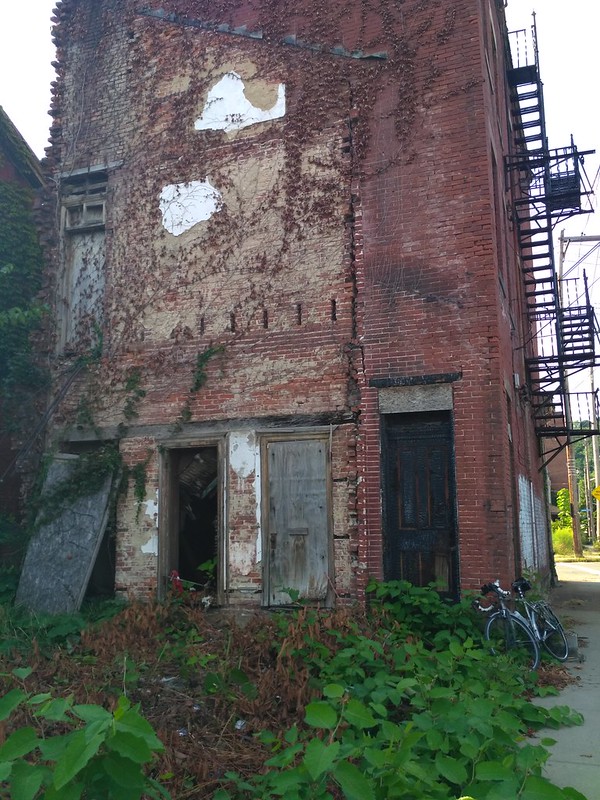 Well, two of you figured it out and I didn’t, despite biking all over that part of town last night. So hats off to you both. That was a true hunt.

I was on the previous page, thought I was safe.
One of the joys of the game is getting Bruced by a relatively new player. Congrats, @jstalnaker!

It is exciting to Bruce someone.

Funny thing about this building is I remember it from when I was looking to buy a house and a this property or a similarly run down property was for sale for $80,000, with the adjacent property going around $60,000.  I drove by a few times curious if the property was worth that much because the building sure was not.

That seems a tad overpriced. Maybe the decimal was moved 2 spaces too far to the fight?

From Zillow it looks like the property includes the entire corner and most of the block down Fulton to Lake. Quite a bit of land there. From the prices they’re asking for nearby properties, $80K doesn’t seem bad. There’s new houses built nearby, and you’re close to Manchester Park and Manchester Playground. “Give me your tired, your poor, Your huddled masses yearning to taste local beer and hear inviting Jazz.”

I have to ask, that green thing is a baby seat, right? How is it riding with a baby in the seat since it is right in front of you on the handlebars?

The seat is an iBert and is awesome.  The only problems I have are I can’t stand up and pedal, and when I stop sliding off the seat is harder so I end up standing on one foot on my tip toe.

As for the kid, he loves seeing everything and having the wind in his face.  He just hit 25lbs and when he wiggles I feel a little movement in the handlebars, but easy to control.  It is nice that I can see him and if he gets bored I can poke him or talk to him while we ride.

He has started to lean his head back and look up at me while we are climbing the final hill home and that can be a little tricky.

I am not looking forward to next year when he is over 32lbs and I have to move to a rear seat.

We had rear seats for our twins and when they got bigger they would kick us in the butt while we were riding. Literally. It was also very hard to keep the bike balanced and get on the bike with them already in the seat as they got heavier.

Sorry for the tag o Rama detour, everyone, but I had to ask!

I believe Kindred might carry these bikes (at least, they’ve had one parked out front).

But also a couple of tag items:
1) I had figured out the location. But I still don’t understand the clue. I did get ‘Man U’ -> ‘Manchester’, though.
2) On that spot, the Neighborhoods ride got confused about which Columbus to continue on. But we figured it out.

@ahlir – The name he gave is a soccer player for Manchester United. And the building was in Manchester.  And then the second clue was how many blocks from the river to help narrow it down. Looks like people got it either via brute force technique or because they knew about the property beforehand.

Also, that’s too many kids for one person.  I have 2 and that’s more than enough. 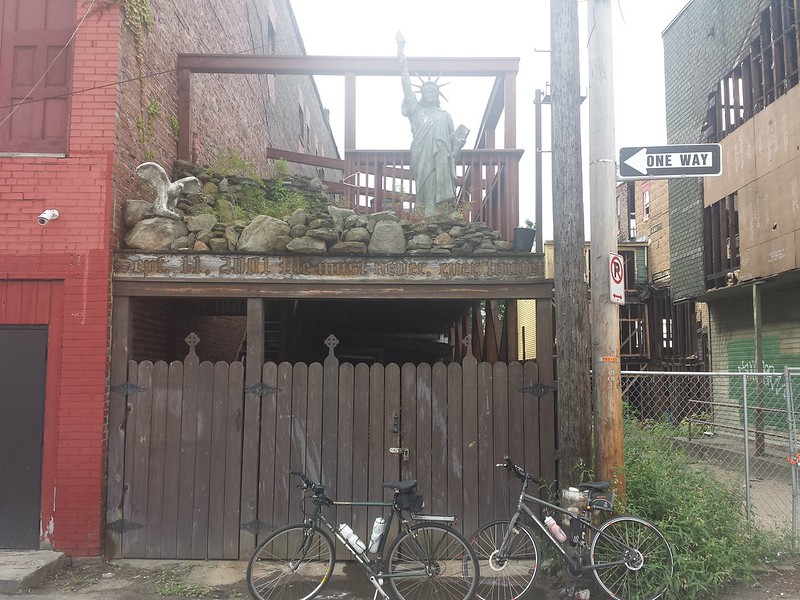 I’ll get the address, not sure now, Northside 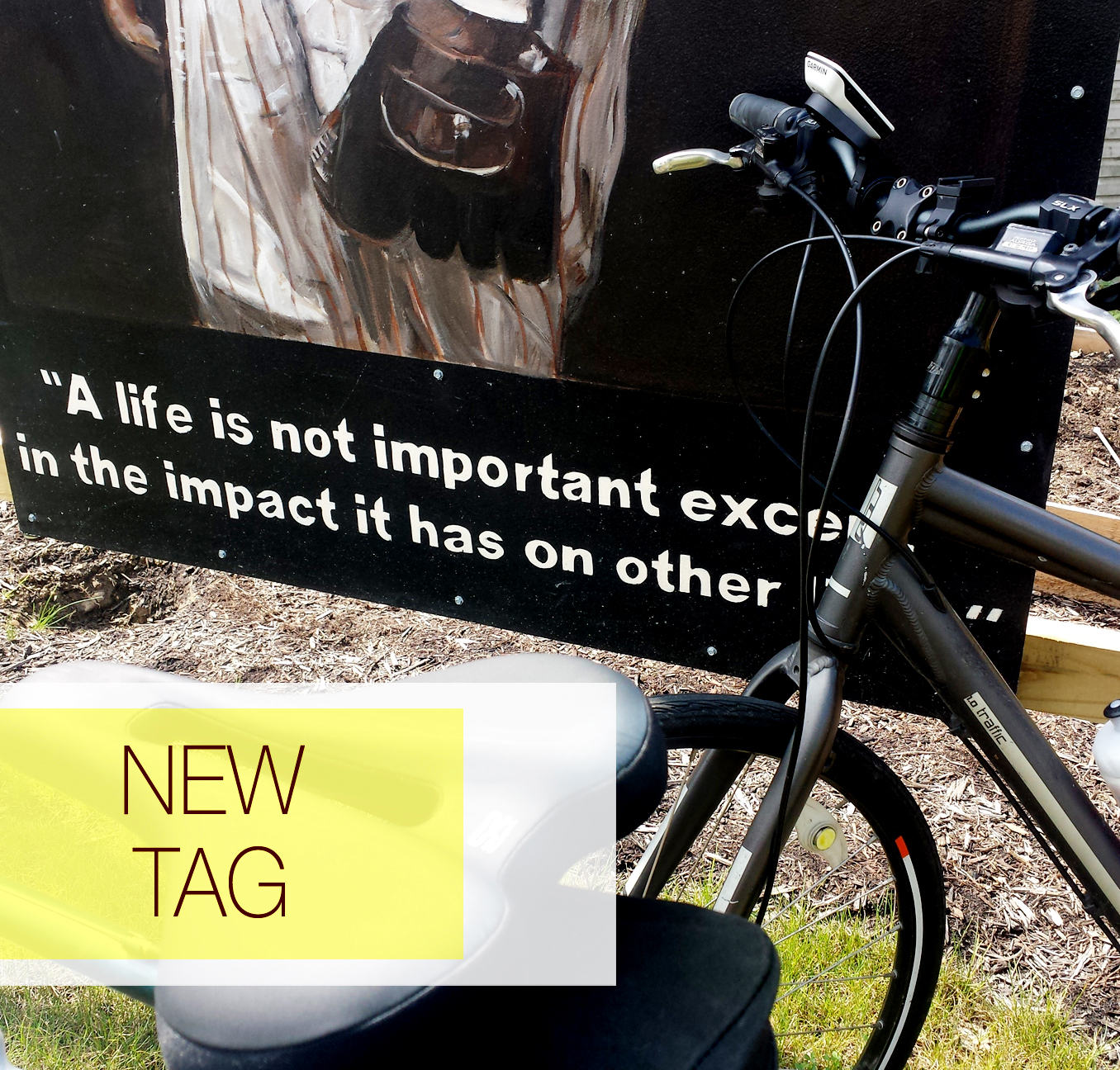 On a street with a name related to sports.
With LindaP 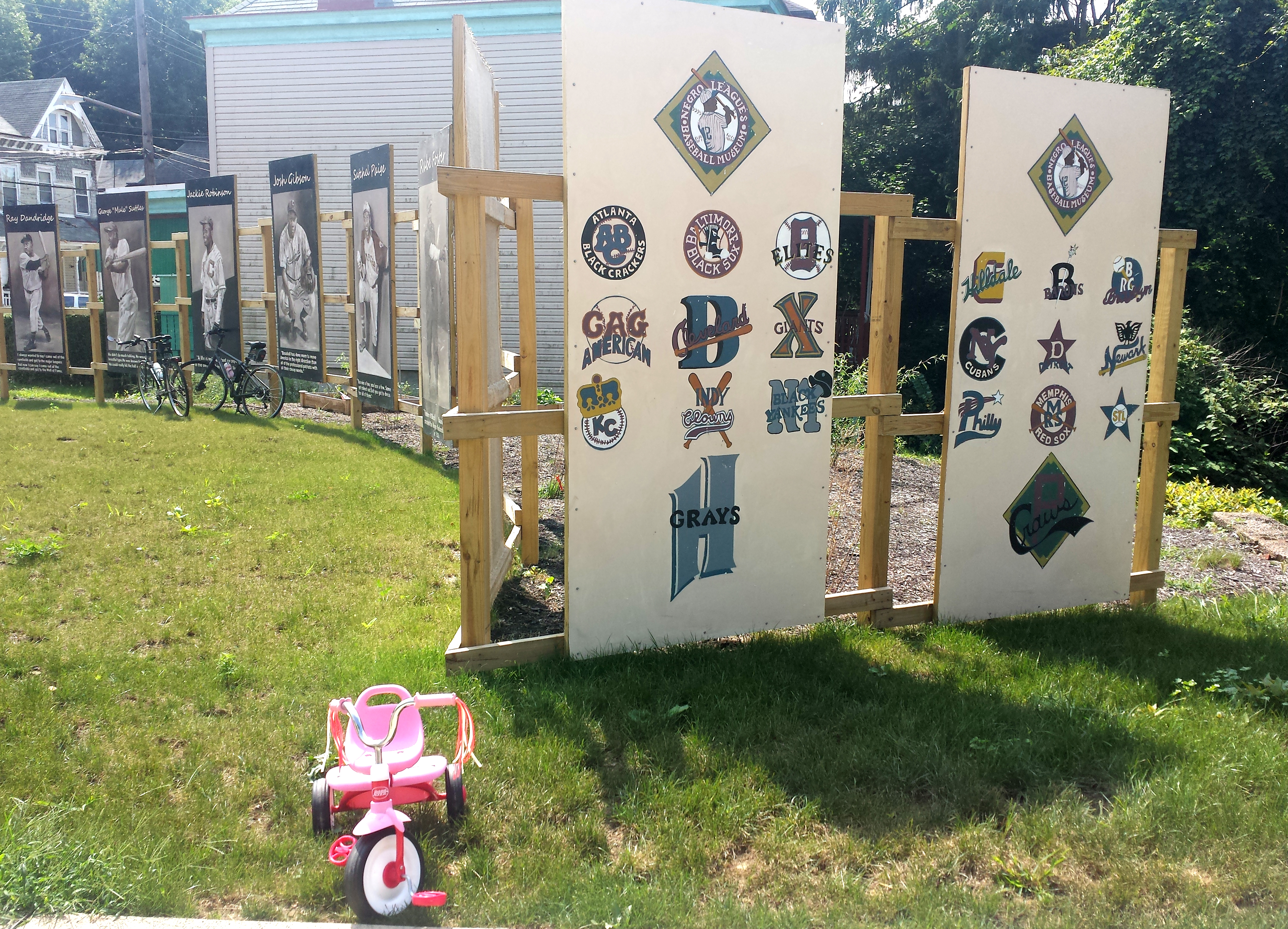 Homestead Greys, but not in Homestead. Hand-painted images, so nicely done.
And no, I didn’t trade in my bike for the trike.

This is NOT on Google earth maps, as far as I can tell.

I was just there admiring on Friday! Finally, I can get one on my lunch.

(I am having all kinds of trouble uploading media, hopefully this imgur link will suffice until I can figure it out)

Nice, and congrats, great to have a new tagger!

And maybe you don’t know, but you can’t upload media via the bikpgh.org message board site, it’s been broken for a long time. You have to have your own method.

If you are using imgur desktop once you have your picture uploaded use the direct link(the one with .jpg or .gif on the end) and post it your reply using”add media, direct from URL”

For mobile I dothe following, not saying it is the best method.  Once uploaded to imgur, hold down on the saved image and click “share direct link”  I paste this in a random text message or e-mail, or document.  Go to the message and copy full direct link.  Then paste that link into your reply here same as above.

welcome from another newbie

If you go east of the Alleghen’, a route home cheat, you’ll pass graffiti, mang, on a tree-nut street. P.S. Thanks for the tips on uploading pictures! Corner of Suismon St and Chestnut St in Northside. If you look at my tag history should give you a good clue as to where to start looking. 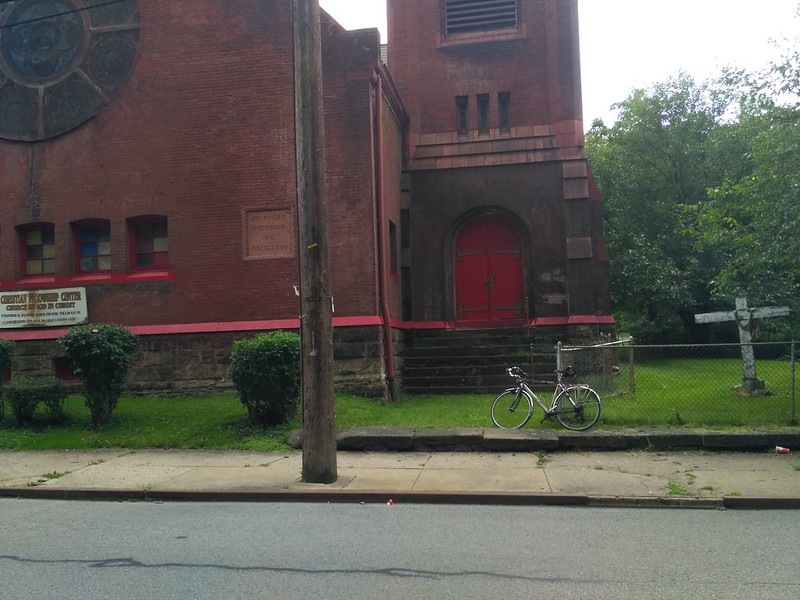 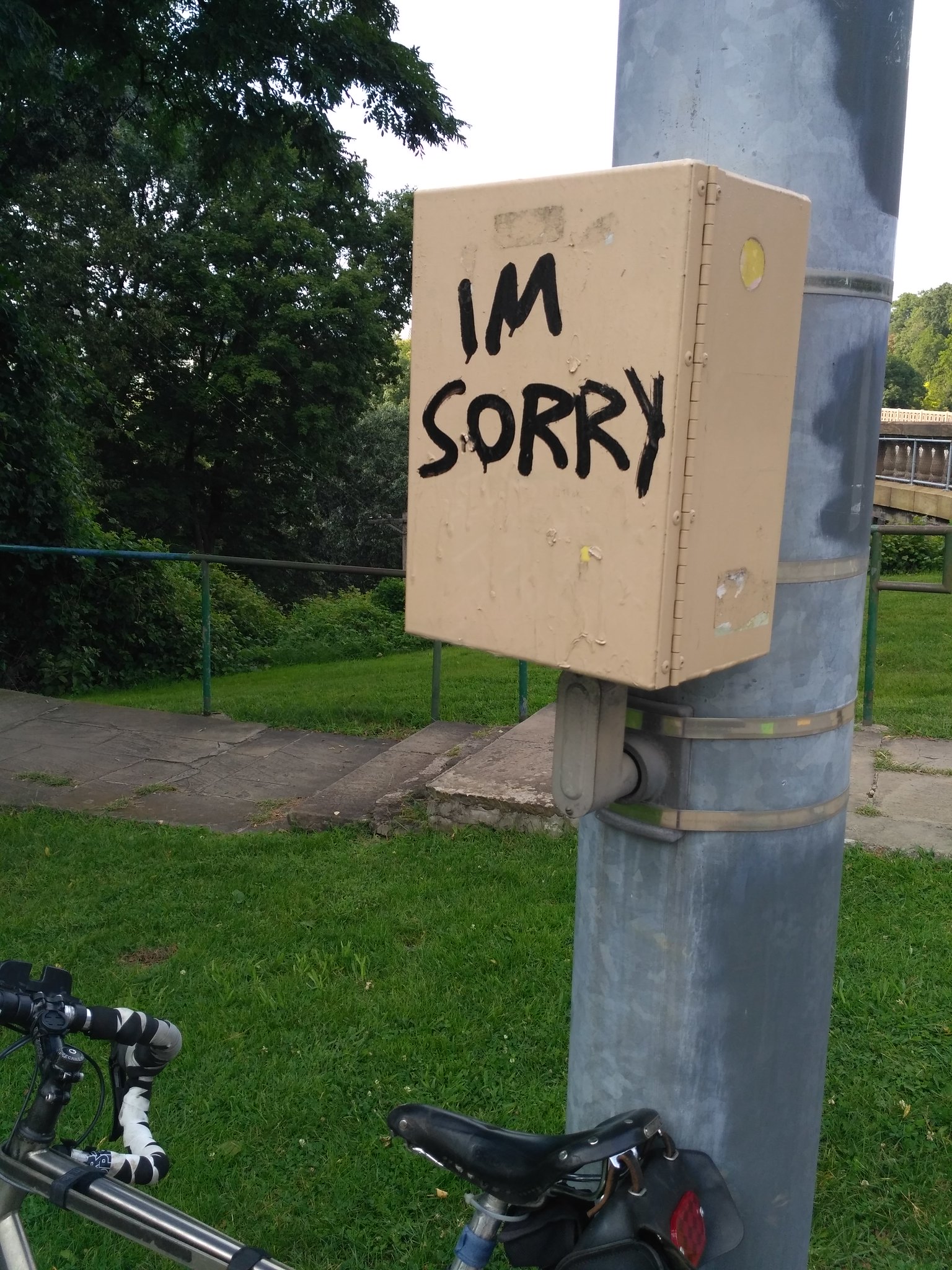 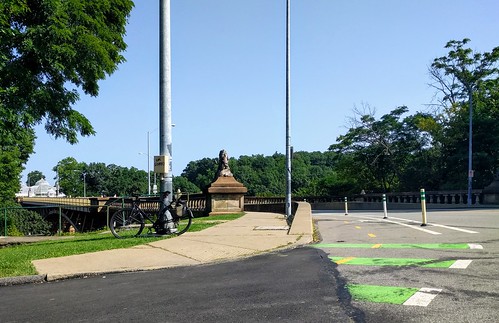 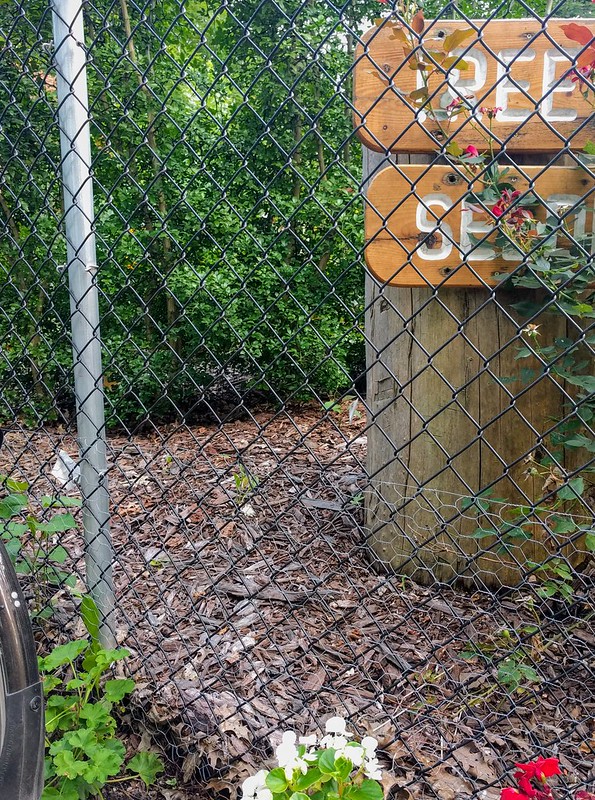 Close yet far away, on a street you might have rolled down. Once.

I could use a hint.

But it’s not even 48h yet… and maybe someone else out there doesn’t need a hint.

Clues I perceive. One, the lettering of the sign tells me it’s a city park. Two, it also looks like a very new sign. Three, the fence looks new. Four, flowers growing outside the fence. To me, assuming those clues are accurate, that narrows the possibilities quite a bit.

What would narrow them further is knowing what the sign says. I cannot be sure, but I am going to guess “Free Seedlings”.

<p style=”text-align: center;”>There doesn’t seem to be a middle stripe of an F in there. That’s why I was wondering if it was a C…</p>
Plus, you figure that the words would be centered to not have a large blank space on the wood…

The letters you see give you “TREE” and “SEED”. Should have asked for some pruners…
In a sense, this tag stands between a Cowboy and a bottle of bourbon. But you should be safe.

The reason you might have gone by only once is because the bottle end of the street puts you on a rather trafficy street with fast drivers, and there’s easier ways to get around.

So, okay, it’s still the pre-season. But we don’t need to wait.

In the greater East End, inside the outermost loop of the BikeFest ride routes…