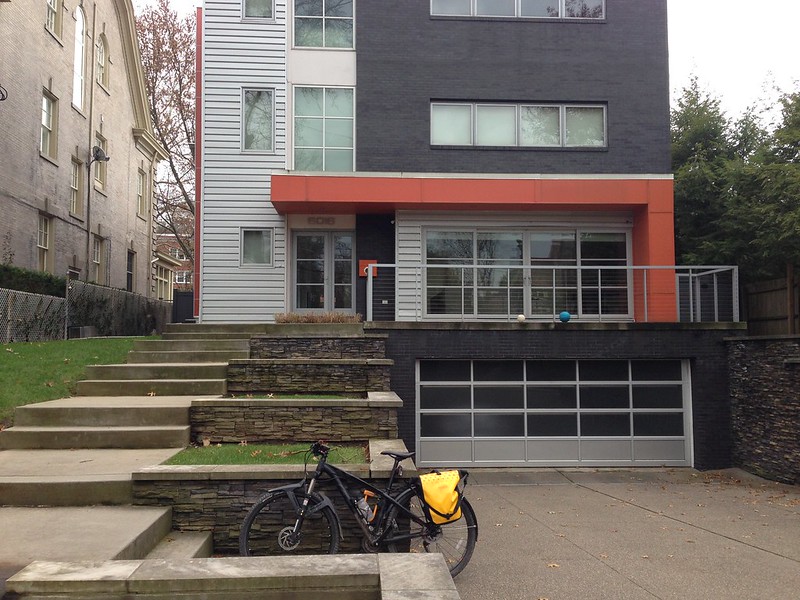 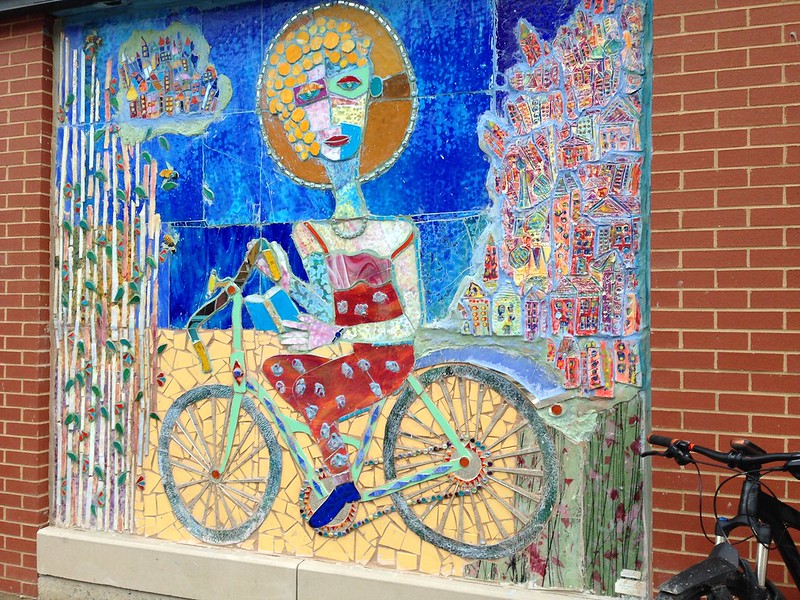 It is more than you imagine, grasshopper*.
It is is Tag-o-Rama.

Hint: the gâteau opéra, nearby, is delicious.

Hint: fine furniture was sold here until a few years ago. The mosaic is new. It’s not yet in Streetview. 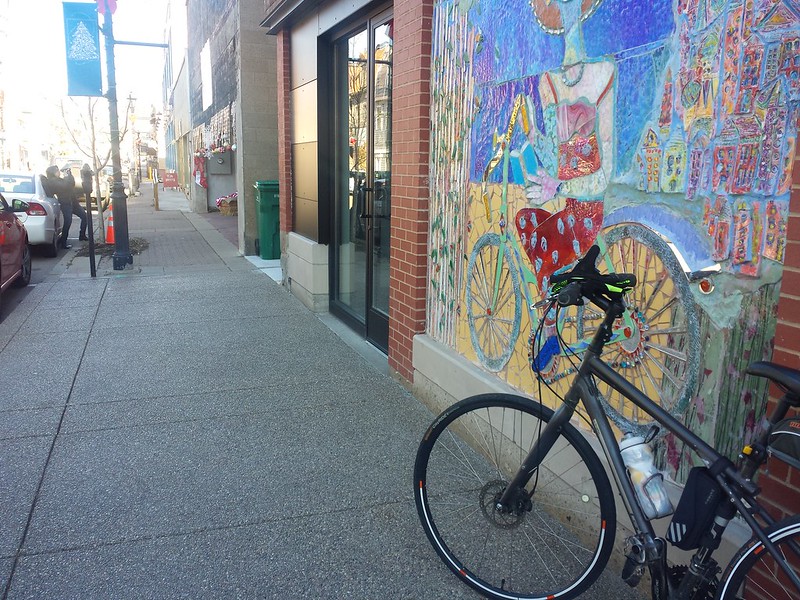 Millvale across from Jean-Marc bakery.  Part of Millvale Studios, says the lady taking pictures, seen on the left of my shot. 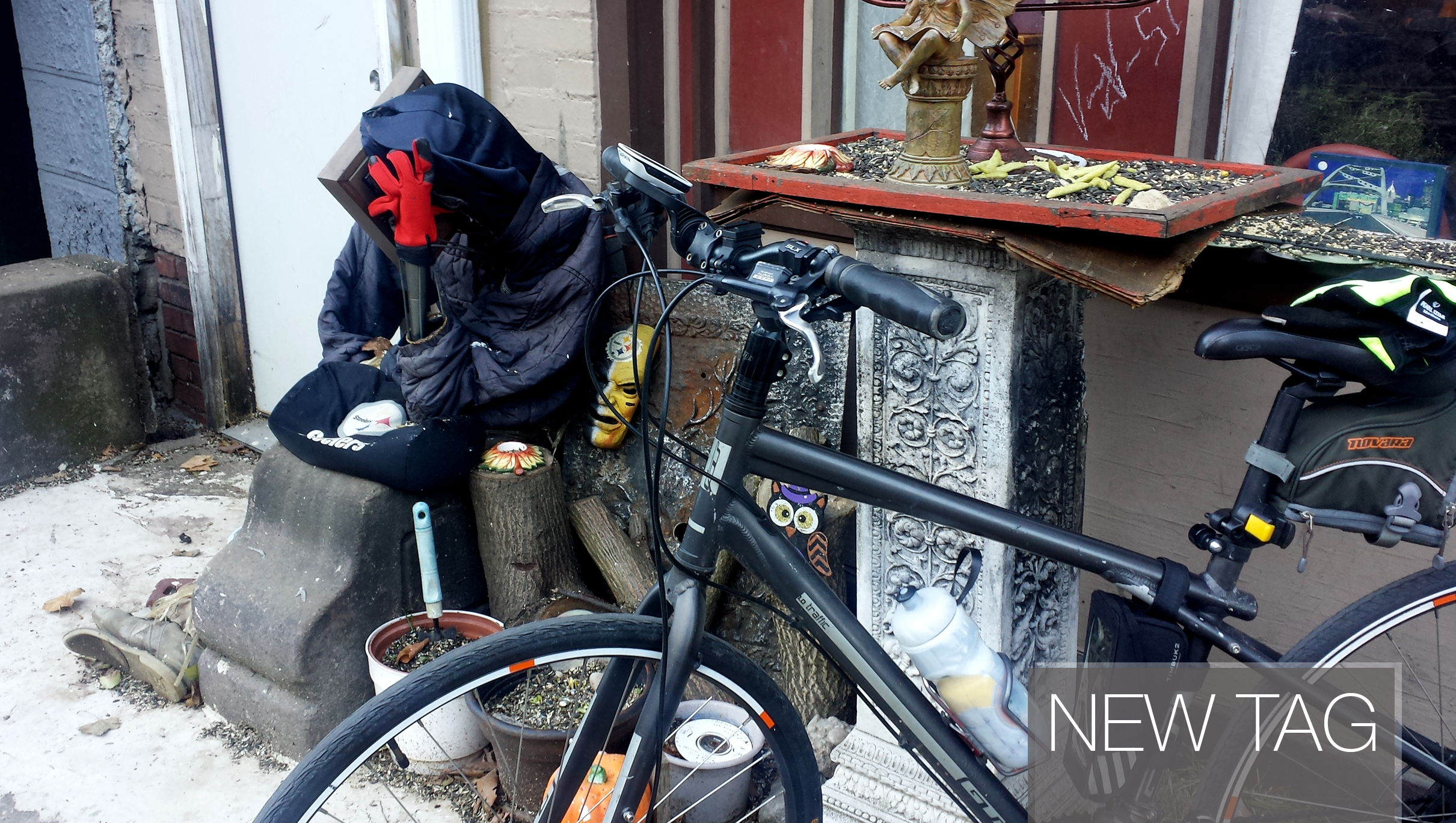 i’m not sure if this is a tough tag or not. i notice this street art, but i’m not sure if others do. a vague clue is that it’s on a share road and today, there were dozens of pastry and bread packages on a long table just behind my bike. There was a handwritten note – FREE, donated by pghnites.com 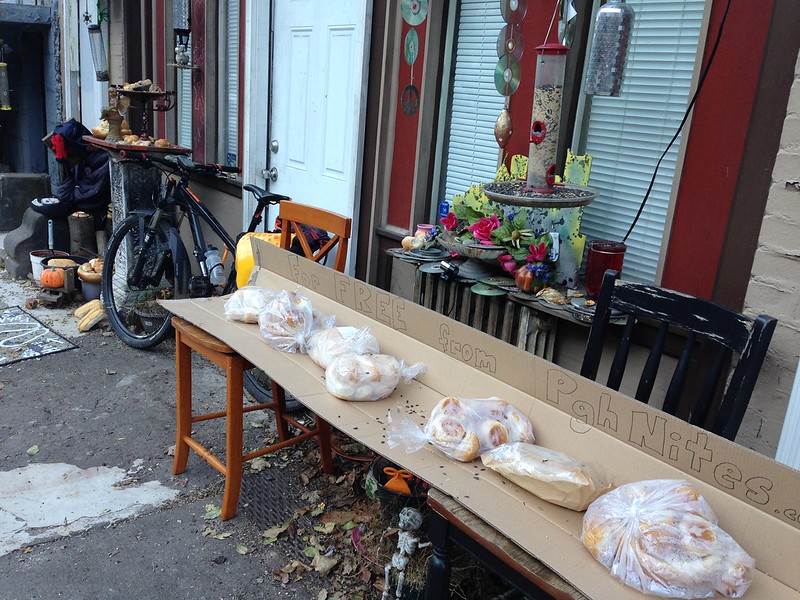 new tag. Get over it. 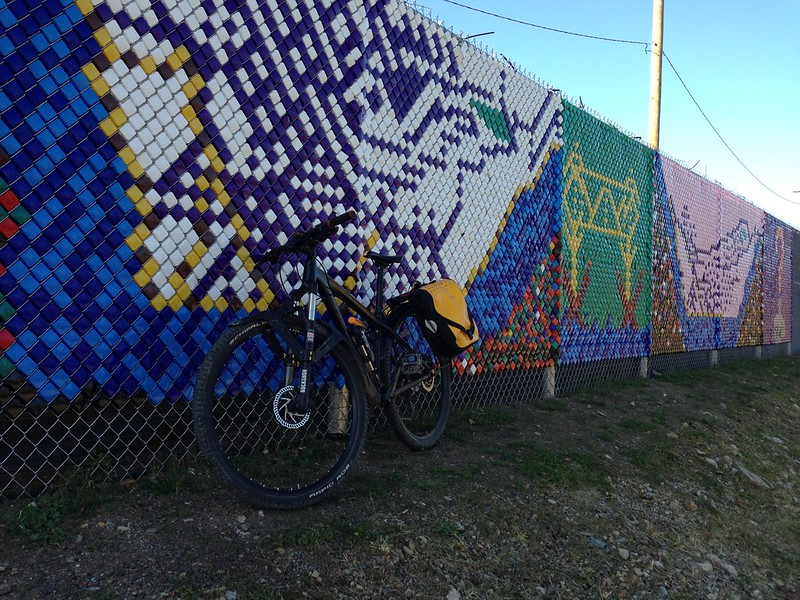 @paulheckbert… I’d say about half of the bread and pastry that was on the table when I visited the tag were missing in your pic. Interesting. Hopefully found its way into the hands of people who need it most. 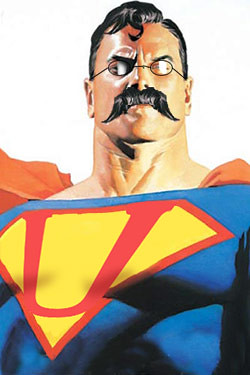 Those were business hints. Street hint: this native American leader had a war named after him.

It’s coming on to Christmas

They’re cutting down the trees

And singing songs of joy and peace

I’m assuming that that is a recent photo. Please verify that what you are parked next to is actually snow/ice, or something else.

(side note, I haven’t been on a bike much, since I can telecommute a lot more often in my new job, and due to various equipment issues, but I’m still very much in this game)

Oh, it’s definitely snow/ice. Now, where might you find that on a not-that-cold day? And what might you do on an icy river, if you had one?

It’s a seasonal thing. They even have it during this season in warm weather cities like LA.

Hmmm, Thursday might have to be a bike to work day. I haven’t made the trip downtown on my new wheels yet, and this might be just the time to take a picture.

Hmm. Jon provided Lyrics from “River” about Christmas, and a picture of snow. So it could relate to a river, to Christmas, or to snow or ice. That really narrows it down.

I have a pretty good idea where this is, but despite having a bike downtown on Friday, didn’t get over there. I’m still having equipment issues, so have hardly ridden much at all lately. Don’t wait for me to pick this up. I might be a while yet. The cold isn’t helping, but my real problem is that it’s dark on both ends of my trip, and I can’t get out at lunch. Weekends are booked.

End of breaking rule 7 of the game.

Sometimes the key is to ignore the obfuscating “hint” and think about the picture. 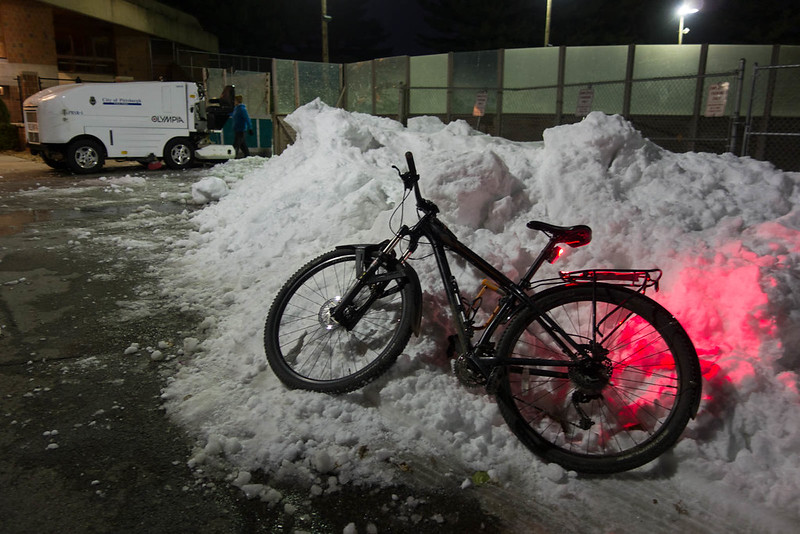 this guy seems to have a drug habit 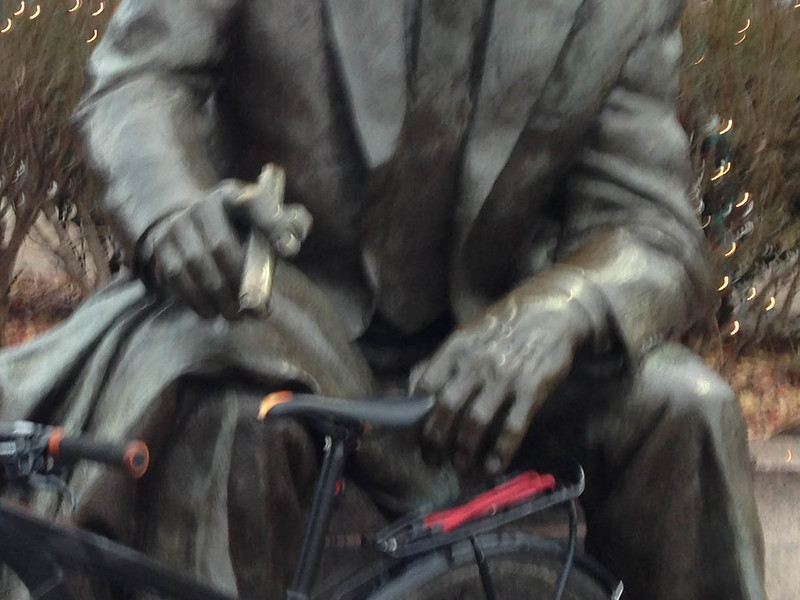 “I wish I had a river

I could skate away on.”

It doesn’t seem obfuscating to me. But your experience reminds of how things seem obvious to the tagger but not at all obvious to others. Glad you picked it up!

I always thought the snowpile was made of scrapings from the Zamboni, not to “feed” it- wouldn’t it just use cold water?  I must admit I don’t fully know how one works.

Yeah, that’s right, from my observation. They scrape the ice and I guess spray it with water, then the Zamboni comes out the door behind the snowpile and dumps what it’s accumulated.

Correct.  And the zamboni uses hot water because hot water freezes faster than cold. No one can say 100 percent for sure if this is true and, if so, why. But it seems to be true.

Hot water has less dissolved oxygen, so it solidifies faster and gives a smoother surface. Something you’d know if you were from a hockey town.

Also: Zamboni at a neighborhood rink? Are you serious? In my youth all rinks were outdoors and stayed frozen for the winter. If it snowed and you wanted to play there were shovels that you could skate to clear the surface. Good leg practice. And the grounds-keepers would always happy to have you do their work for them…

Thanks for the Zamboni tutorial.

It all makes sense now: I saw the Zamboni barfing snow but I’ve never seen a Zamboni eating snow.

And just to beat a dead tag…

The Zamboni is supposed to scrape the ice to below the level of gouges make by skates and rebuild the surface to its original height. I’m not sure if that’s actually completely regenerative (meaning you don’t need to periodically flood the rink) but it’s a great solution for refinishing the surface in-between periods during a game.

I’m pretty sure you never have to flood a rink anymore in which you use the zamboni. It is a neutral process.

Hint: this is not in McKees Rocks, Blawnox, or another corner of the rectangle. It’s fairly central.

Well, it’s not the Stephen Foster statue by Dippy.

Edit: Or any of the other statues around the Carnegie Museum complex.

Hint: as I shot my picture with cigar guy, there was a line of about ten people waiting to do the same! 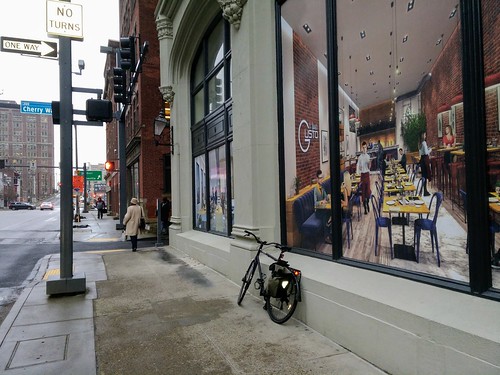 Former Art Institute Bldg on Blvd of the Allies at Cherry Wy.

That was a creepy tag. At first glance this is a nice shot through the front of some eatery. But then you look closer: The perspectives in the two panels don’t seem to quite match. And the aspect ratio is off, maybe more on the right than on the left… 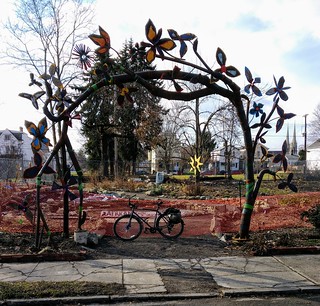 A meadow, and a restful garden…

@Ahlir is really good at finding these out-of-the-way landmarks!