I kept six feet behind Dave.

Southside trail by Scot Awodey Bench in the Rainbow Garden. Allegheny Ford Truck to the South and the County Jail acris4s the Mon to the North. 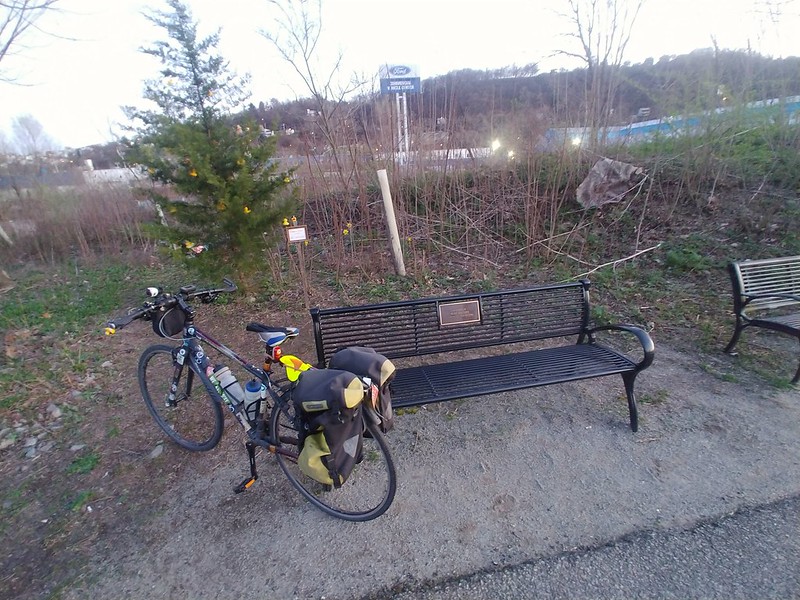 Too cold for lizards today? Not like they have anything else to do.  C’mon, I am looking for a reason to go for a bike ride- I like to have a destination, not just a joy ride.

Iguanas become immobile in the cold. They may look dead, but they’re still alive.

I can understand this immature impatience from @paulheckbert as heckbert has roots in heckler and paul is rooted in small..which explains much.

But at @Dave was a surprise until I gave it some thought as David derives from beloved…but further consideration revealed the hidden. As @Dave’s other name derives from frothy which explains the rabid attitude…while Dave further derives from lovemaking…frothy lovemaking…

In both cases, forms of whining which seems to be the favored form of post here.

Mr. Ig- I am curious what your definition of whining is? I don’t see Paul’s two statements as whining at all.  Pure, declarative sentences.
Mine could be interpreted at a whine, as is yours.  Or you could see my request as encouragement, plus a statement of my usual preference for a reason to ride.
It’s a nice spring morning, not raining, and I have an errand to attend to on two wheels.

Whining is anything thing irrelevant and inappropriate to the GAME. Encouragement is not needed and IS whining (come on I want a new tag…post already…whine, whine, whine…)…and we know the rules… declarative statements don’t preclude whining… this post is whining..back…

That said, I know my time to post a new tag has expured, I have had some trouble with Flickr, so I humbly (redundant since iguanas are naturally humble even if immobile in the cold) ask for some patience… I’m working on it.

Patience granted. Paul and I are not going anywhere significant.

I guess the above post constitutes a whine by your definition, as does this. We then need to resurrect the whining discussion.

It’s been more than 2 days since Iguana picked up the tag, and the time limit is 1.5 days, so his pickup is invalidated by rule 2a:

#2a – After you pick up a Tag, a new tag must be placed within 36 hours. If the new tag is not set within the time limit, the first Bruce posted gets the tag. If no Bruce was claimed, tag will revert to the previous tag, and somebody else will get their chance. If you won’t have the time to drop off a new tag, don’t pick it up to begin with.

So somebody go pick up the previous tag!

I posted it yesterday … after explaining my flickr problem.. 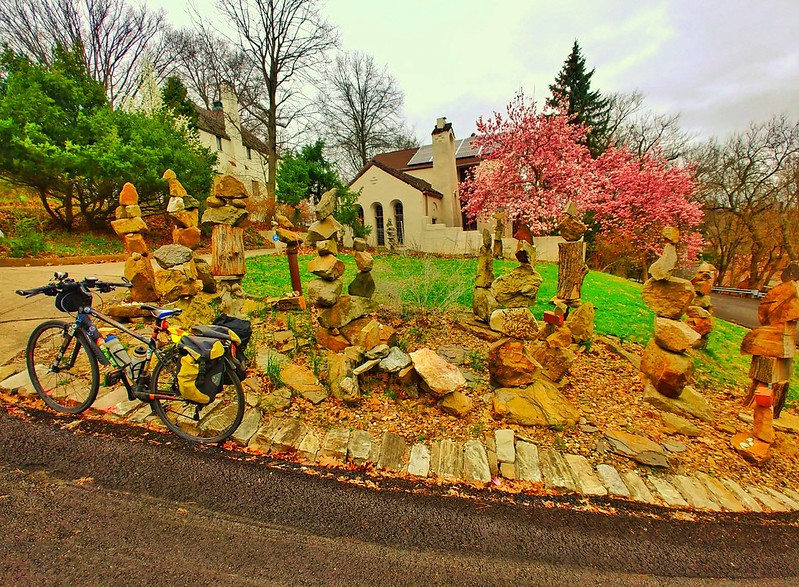 As per Horace Greeley

Do you need more hints?

I am not a key master, but it did post.  Cryptic as always- I certainly would appreciate another clue, plus a guide to your reptilian mind.

[whine: I thought clues were supposed to be cryptic; isn’t that their nature? I’m sure @Keymaster can quote the appropriate rule.]

I read over the info on reptilian brains and crypticism, but did not see how those constituted additional clues.

Silly me @Dave I was just respondinding to your questions.

But as described, there was indeed a clue…a meta-clue… maybe too cryptic for you.

Or would you prefer gps coordiates? Or the address?

And therewith is a clue.

Gst out and ride… you’ll find it.

Nice riding weather, but wear a facemask. Better get this tag before we are fully locked down…unless we can get a waiver.

You’ve got the address, the directions, the GPS coordinates, the Rosetta Stone. There’s nothing else to give.

[And wear a facemask, but not over your eyes and stop touching yourself…else you’ll be blinded….on either case.]

So, hollerin’ distance from the Blue Slide. If I ever get farther than 100 feet of the house, I might just go look for this. 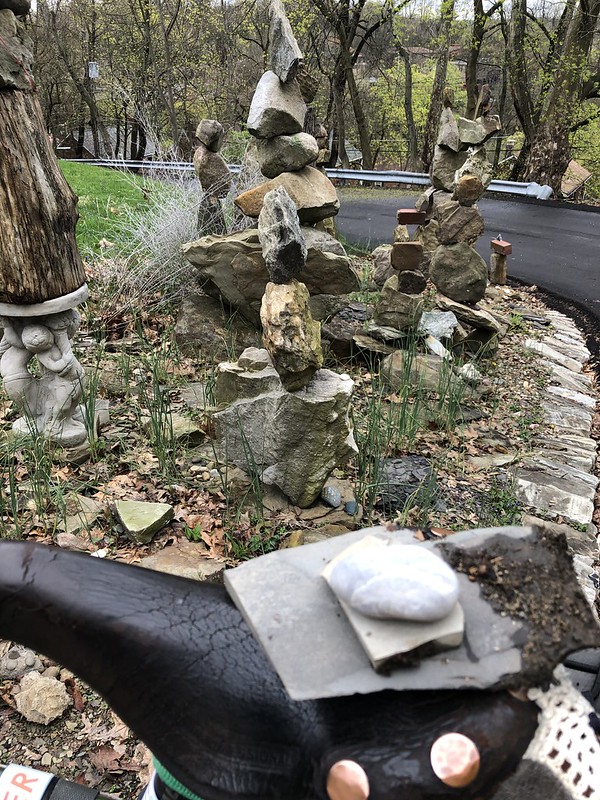 not sure why/ if this seems to not be working.

The Traynors look out towards a street where cowboys play.

Homewood Cemetery along Dallas between Woodwell and Ridgeville streets

Continuing the theme of the previous tag: 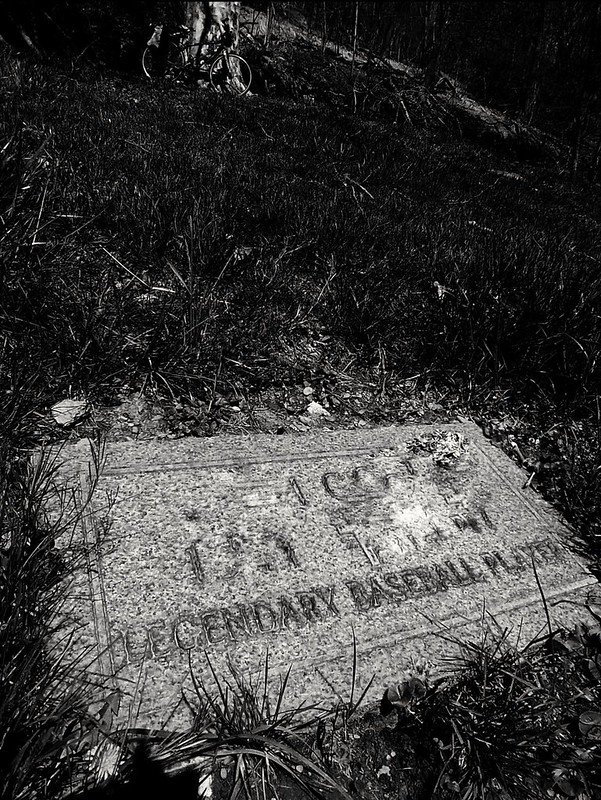 This is a Pittsburgh story so think gray days and brown hills and black …. And Rivers: Crossing the Jordan, but not the Ohio or Monongehela. Maybe the Mon. And don’t strikeout considering famously halled cardinals of the 60s.

Is the name on that gravestone defaced, or is the picture edited, or is there just a lot of stuff sitting on the marker?

Wow, I actually know exactly where this is.  If I start now, I could probably be there by Wednesday or Thursday.  Or maybe not. 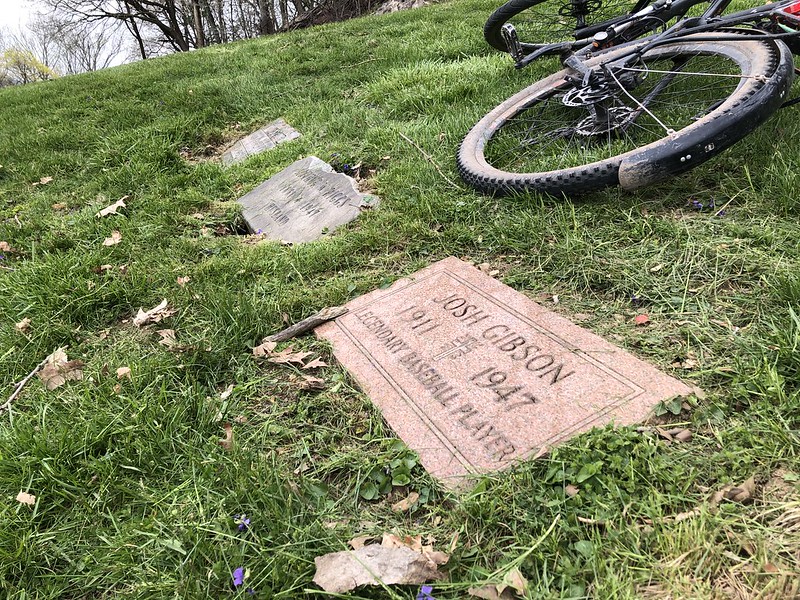 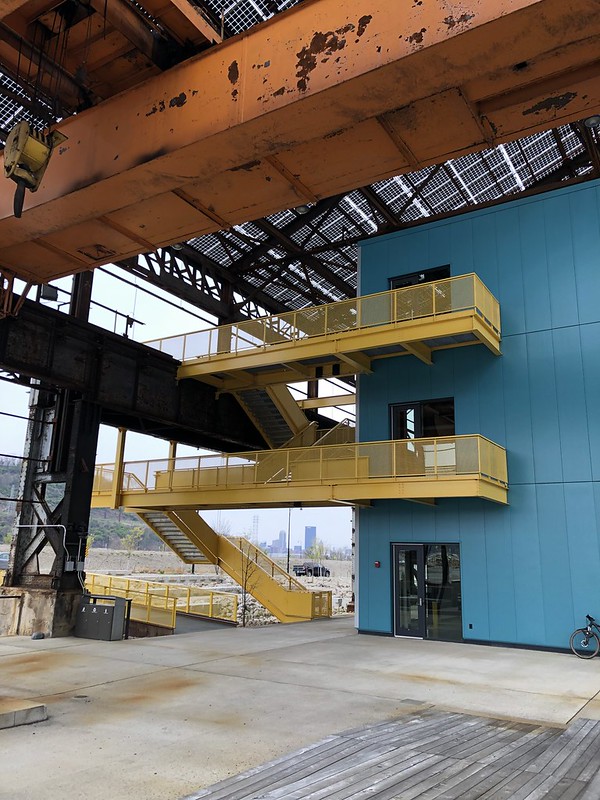 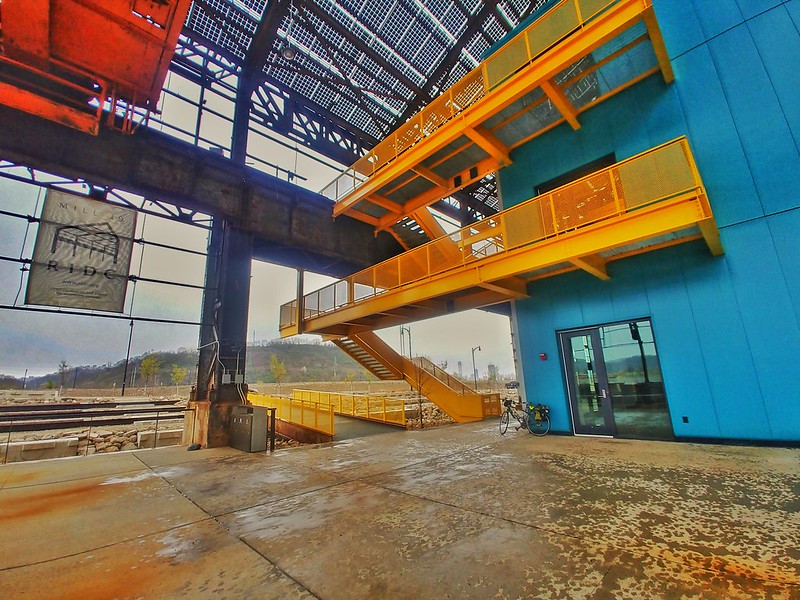 In keeping with the baseball theme, don’t confuse this guy with the 1908 Cincy player who was often beaned. But social distance and mask-up here…infection and death abounds here. Wear a helmet and gloves. And stop touching yourself.

Paul, I think this one is on you.  I rode around the neighborhood of the Kane center and could not find this pole.  May have missed it, or the sign is not near the center.

@Dave, @paulheckbert: I didn’t realize the game was restricted to just us three.

I’m surprised you couldn’t find the tag… as the queen might say: Deary, during the Blitz we often had less than a minute to find a shelter/tag. And we moved on…EU…Brexit…COVID19…Tally ho.

In the news recently because four residents there died of covid-19. 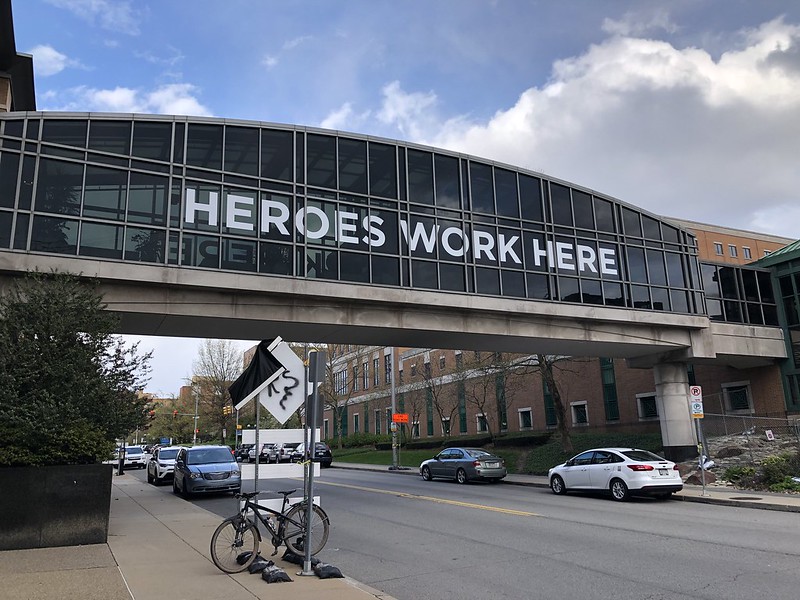 How fortuitous..I ran out for a quickie to Aldi….checked for a new tag…expecting to whine about it…And recognized it…for a quickie tag:
5115 Centre UPMC Hillman Cancer Center to UPMC Shadyside Hospital Bridge 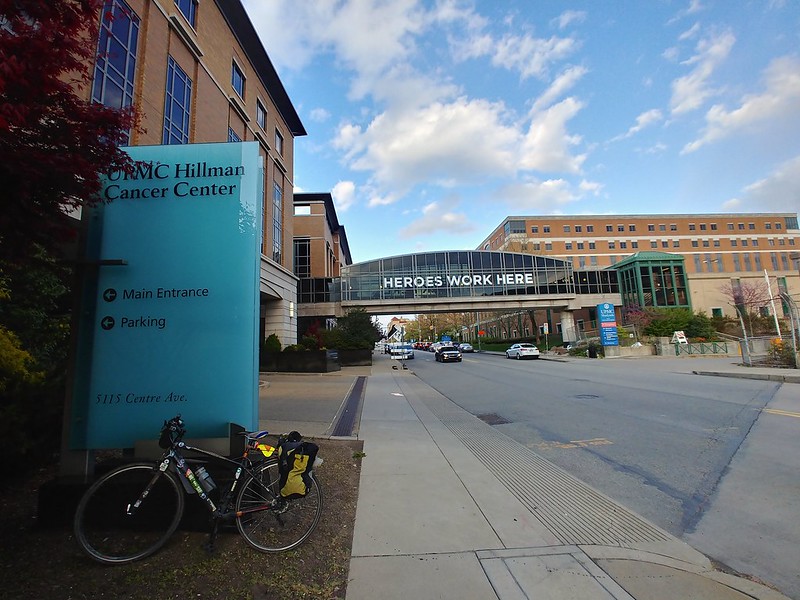 I;m curious as to how and why there is a car fragment in Paul’s Kane tag  pickup?

…keeping the baseball theme, this guy is spending eternity with both wives. But their husband was a busy man in this world as well. 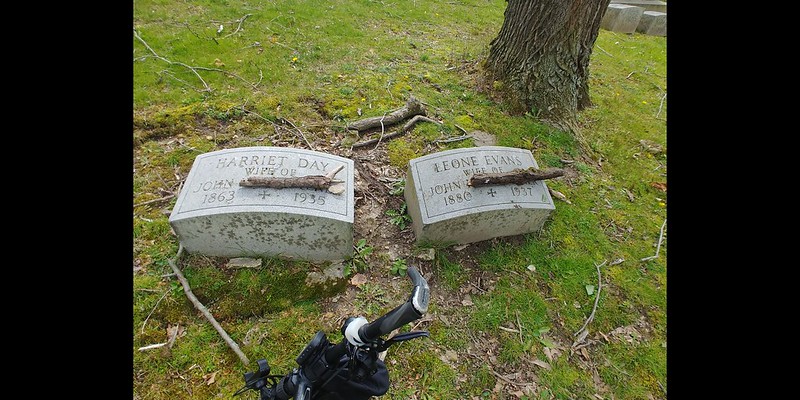