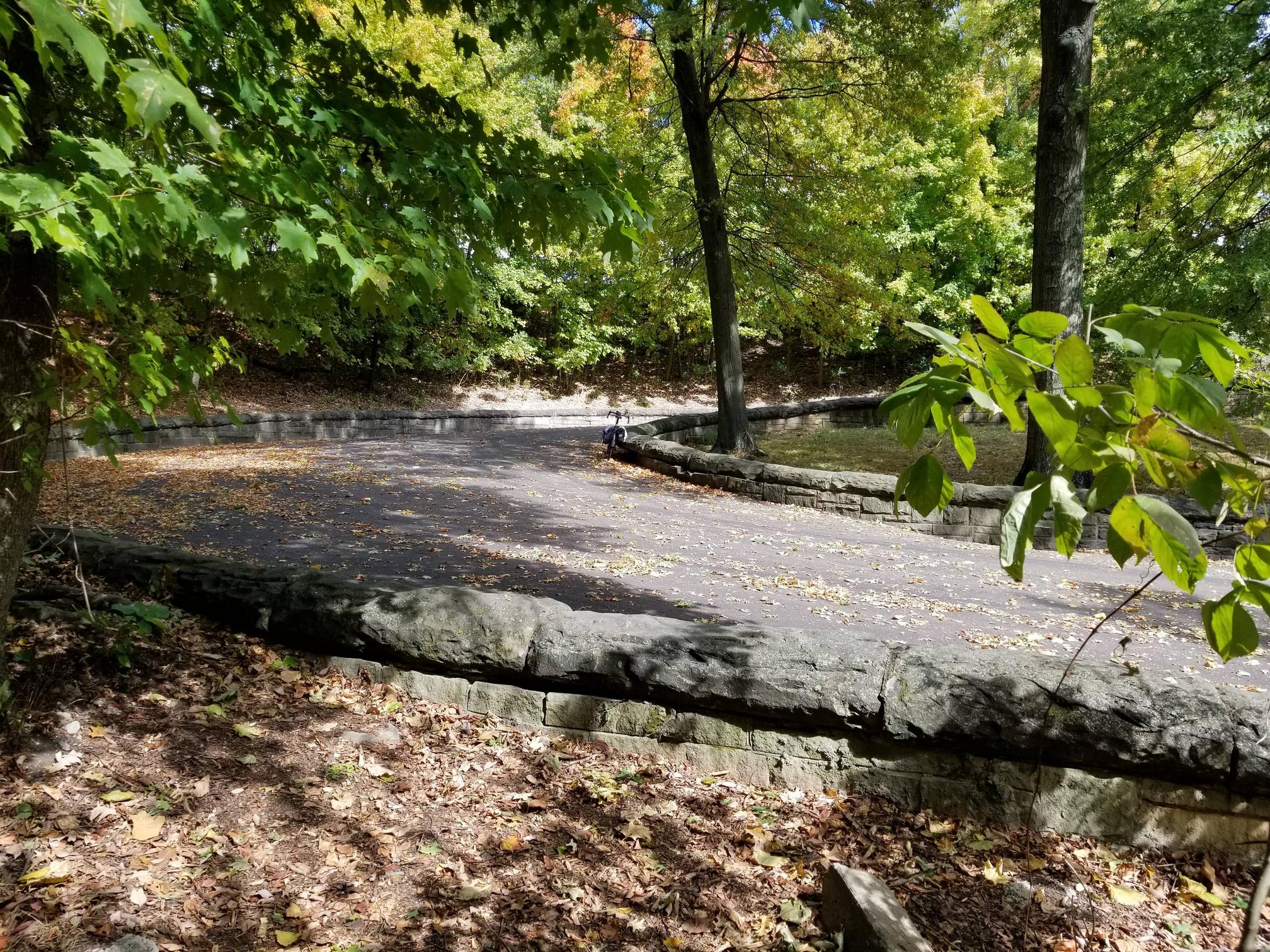 Out of curiosity, did you use the clue at all, or just know where it was? I like my clue, but wasn’t sure it could be useful.

I was 85% sure I knew it, so i did google search on the chemical make up and confirmed the location. 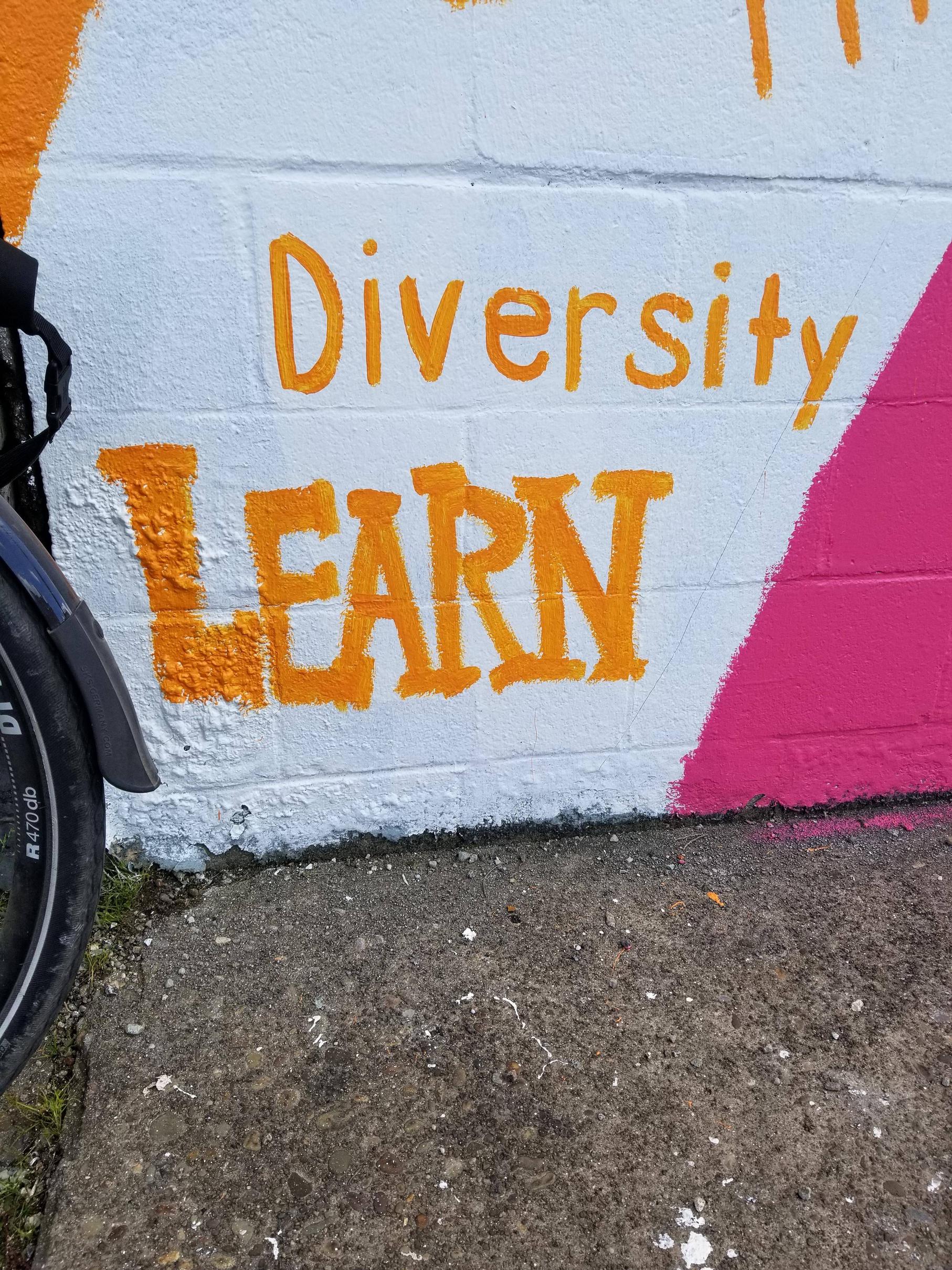 I will try and come up with a clue, but this is a fresh paint job probably passed by between 31 and 40 bikers a day

Additional hint.  This is a fresh paint job and you won’t find it on google map.

Let me know if more is needed, it is always hard to tell if it hard to find or not being seeked.

So apparently my new paint job wasnt complete and now my tag is gone.  Here is the building from my car.  Sorry no bike. 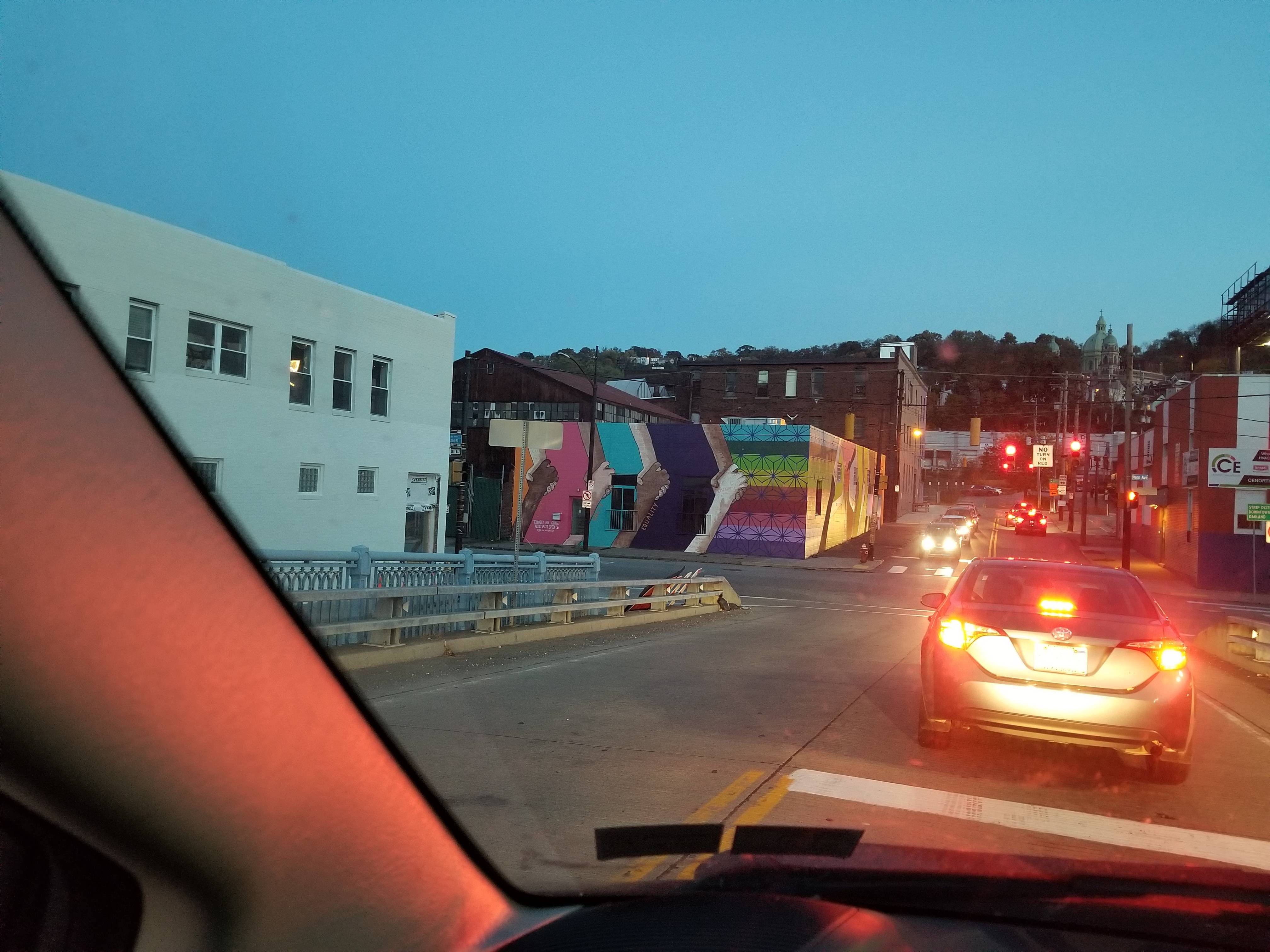 Diversity/Learn in mural at 31st & Penn 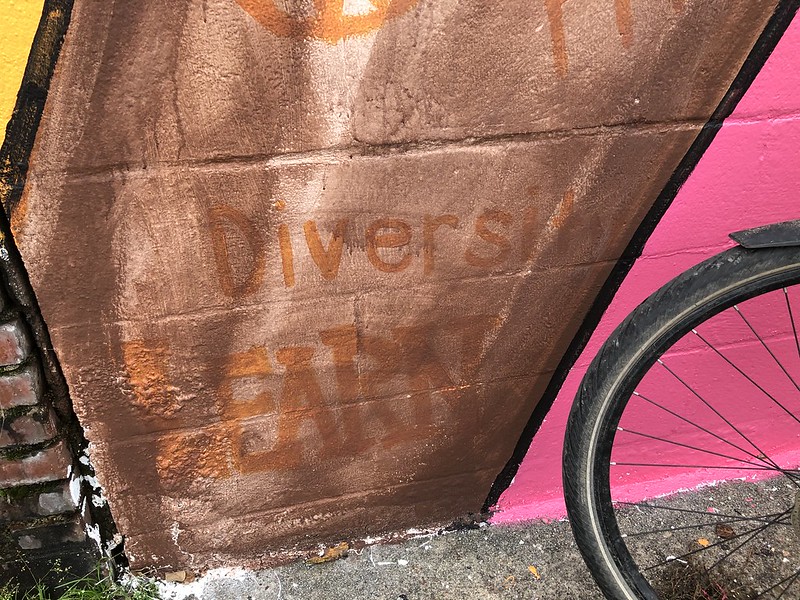 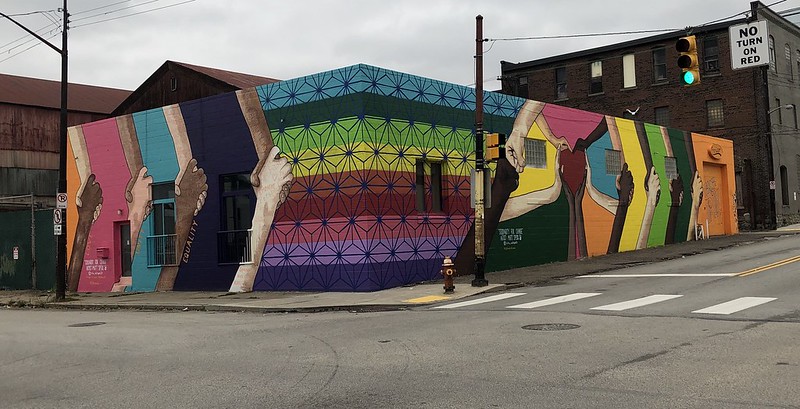 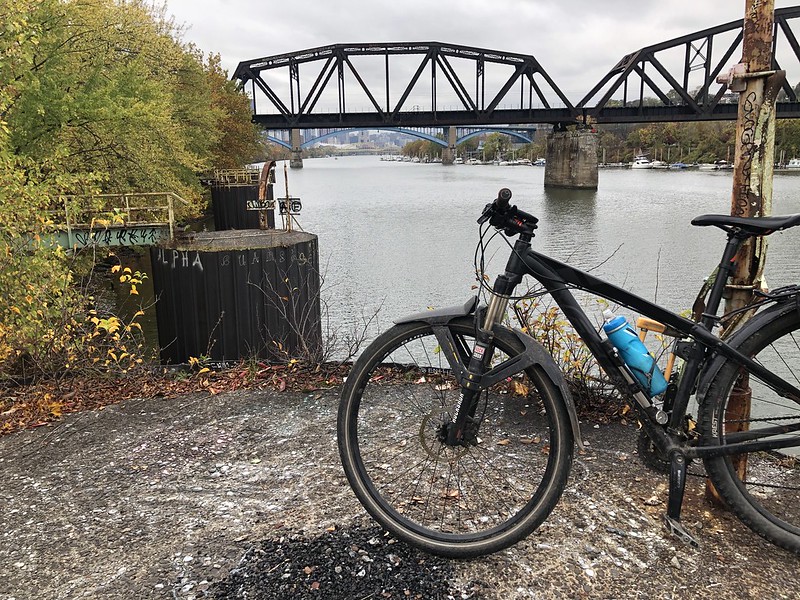 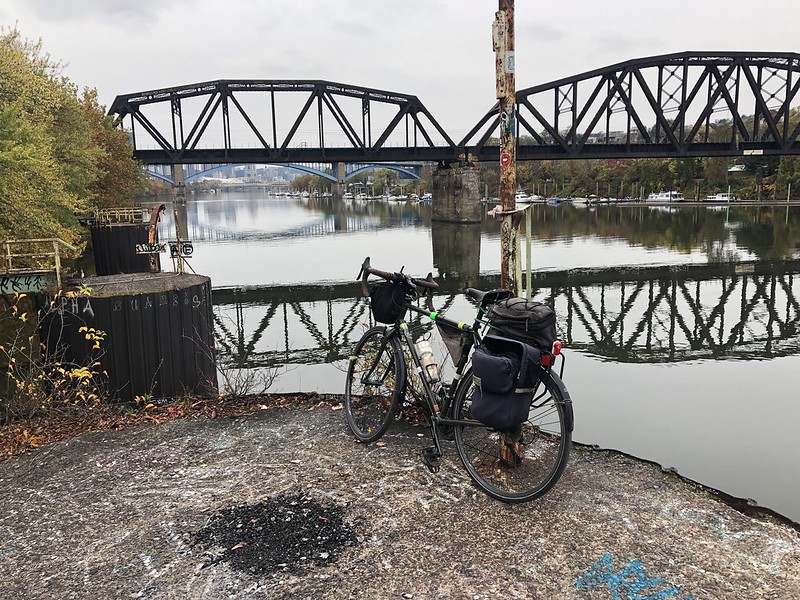 past the north end of 35th street looking west. 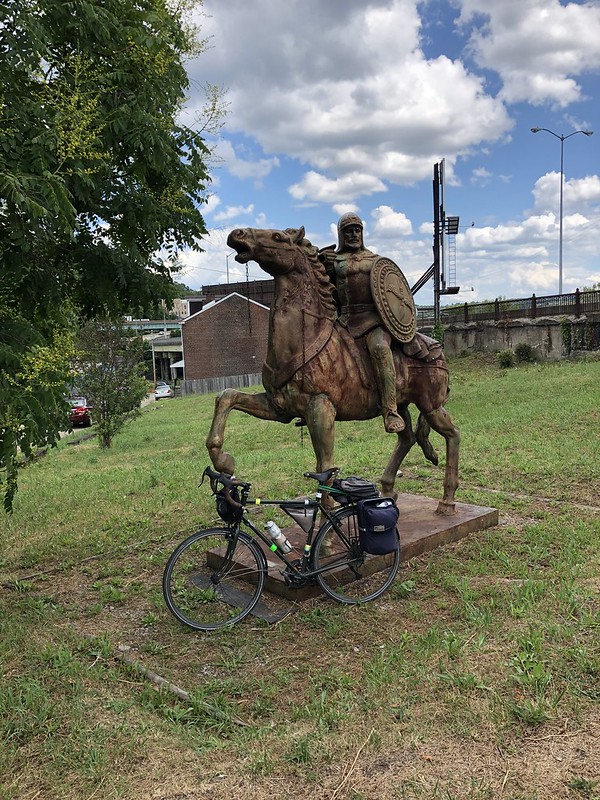 Mr. guarding-the-bluff has been done before, but that’s OK.

I am out and about- will post another later today. Can’t have people riding the same streets all of the time.

i enjoyed getting to your last tag. Even stopped into restaurant depot to look around.

To quote Paul on his cemetery tag: “new tag. let me know if you need more hints (beyond what’s in the picture)” 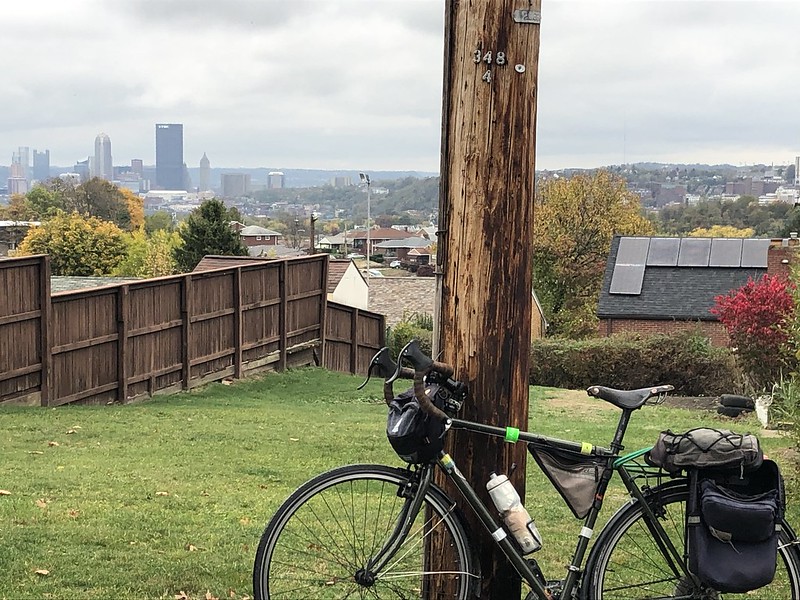 Need a clue? Street name is the same as the Biology building at the university where I received my graduate degree. It’s sort of an intersection, as the house on the right is the aforementioned street, while the house on the left is listed on a cross street, even though the “street” appears to be their driveway.
But you need to know the neighborhood first – is that obvious enough from the picture? 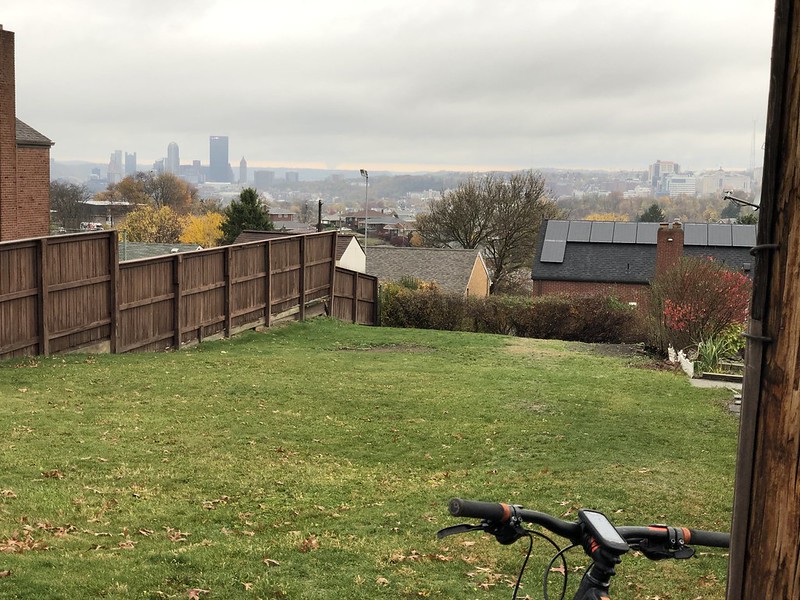 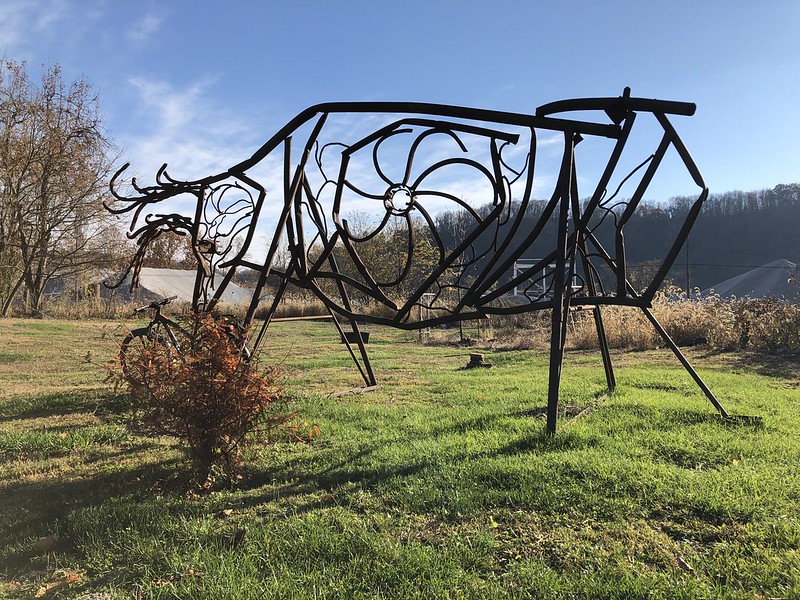 Additional hint: walk less than a mile east, south, or west from this spot, and you’ll be in the water.

Ok, this has been up long enough. I admit I have not looked real hard. Another clue? We should still be doing this in the winter.

The nearby water is a major river, and those hills are on the other side of the railroad and the river.

I think I know where this might be. Just need to get over there to try to lineup landmarks.

I found the street (I think). Now just have to find the time to get over there.

I have tried 3 times to post my tag pick up. Will keep trying – not sure why it’s not working

I found it this afternoon by chance, was just riding along when I saw the heaps of stone, thought they looked familiar and rode around the block to see if I could find the deer or whatever it is.  And there it was!

In the interest of having another person involved in the game, I defer to Naomi to set the next tag.

when I was there, some of the neighbors were out and said the piece was by Tim Kaulen, who has a lot of other public art scattered around. They also said the little solar powered light strips make it look cool at night.

Thank you, but it’s yours!  I wasn’t chasing the tag, I’d looked at the area on satellite view, found nothing  and forgotten all about it, just thought it was funny that I recognised the giant heaps of stone & that the photo poses were identical.  It was too late to look for new tags, getting dark.

Tim Kaulen does nice sculptures. He was part of the Carrie Furnace deer, and also the hockey players at Southside Waterfront Park.

Please DO hurry to post a new tag, Dave. We need to pick up the pace, here. Maybe Naomi can pick up the next one. 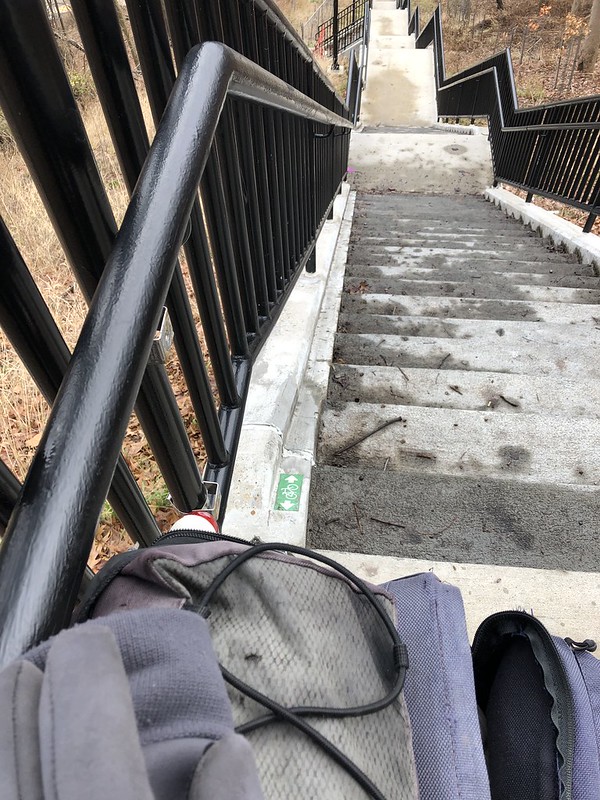 How many runnels can there be in Pittsburgh? I don’t really know, but if anyone needs a clue this is between arts and cats.

I know where that is by the trees, but had not seen a close-up photo of it before. It’s going to be a project to get there between the end of work and the end of sunlight, though, so don’t wait for me to grab this. (I’m still in this game, but have been sidelined with being an hour ride just to get to anything in town for the past almost 10 months.)

Maybe next tag can head west or north to give you a better shot.

Apologies for barging in… These stairs have already been tagged, albeit near the bottom (I picked up that tag).

The stairs to the left, a ways down, I believe go to a parking lot. So these stairs make everyone happy: Bikers get a runnel and drivers get a shortcut.

Hmmm. I must admit I did not check before posting. Since it appears there are only 6 or so people paying attention to this, unless rules dictate otherwise, do people have a preference- set another tag, or someone still get this one?  I could set another tag within a day or two.

Keep the existing. I don’t think it’s been tagged since the rebuild, and I’d be as curious to try it out myself as I am trying to get the tag. The weather has been so temptingly quiet these past few days, but work regularly drags out to the end of daylight, so the bike has sat.

Stairs from Frick Fine Arts library down to Joncaire St 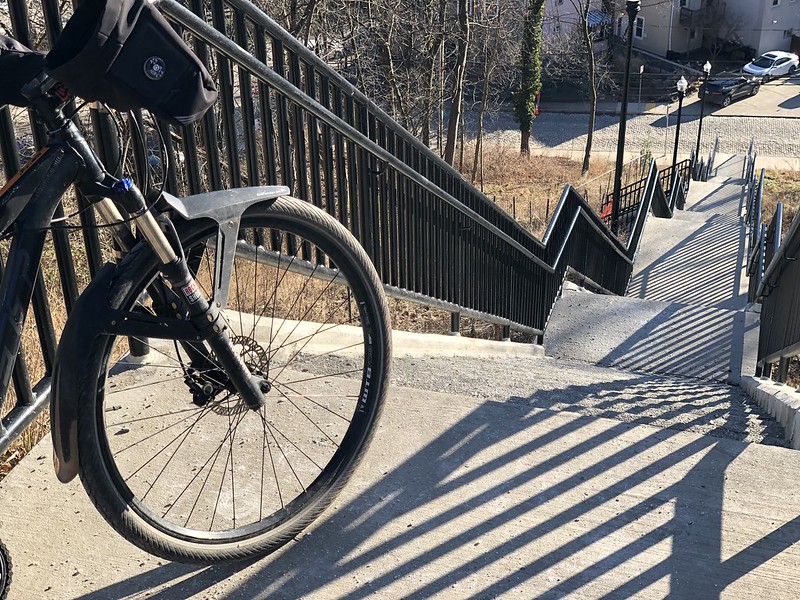 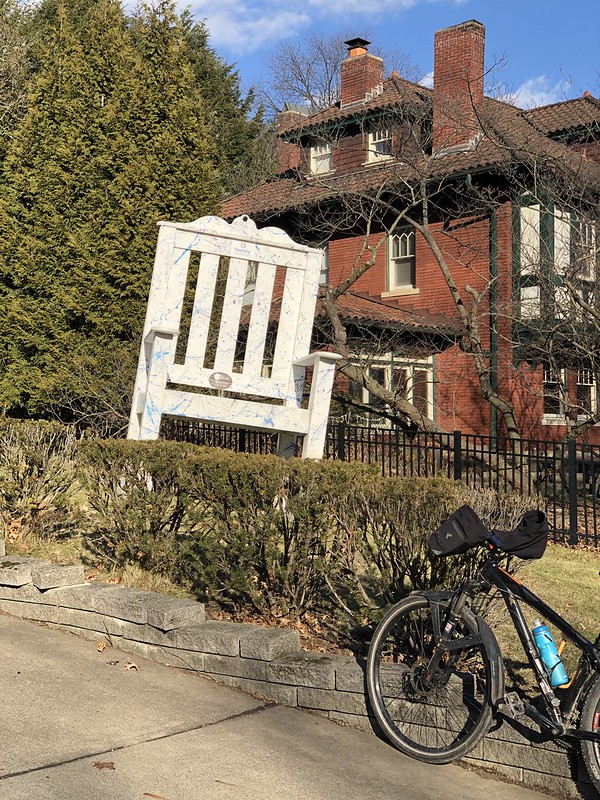 No clue? I have a hunch based on architecture and slope, but that’s pretty thin. But more than those that thought their storm would unleash yesterday at noon.