And oh yeah, Zombie fest is there on Saturday. Brain eating and screaming contests.

I thought I knew this quotation, but I looked it up anyway.
Turns out it’s not Lincoln, but I was sort of close.

Note: I couldn’t quite make up my mind on which shot to use, so if you think the image looks different from earlier… you’re right. Feel free to complain, or just use (your recollection of) the other views to help you snag the tag.

Wow, this is an actual place in Pittsburgh? Whatever and wherever this is, this is an absolutely wonderful tag! Like “Octopus’s Garden” and “Snoopy’s Doghouse”, this leaves me with that feeling of awesomeness that we really do have a cool town here, don’t we? Thank you, Ahlir, for finding it!

Indeed it is… and the building has some cool facades.

At some point it must have been a religious institution (off to the right is what looks to me like a church entrance). It’s located in the center of Pittsburgh’s old Little Italy.

While riding this Morning,
I found this gun in a rock.
Get out on your bike,
And prove you’re a jock. 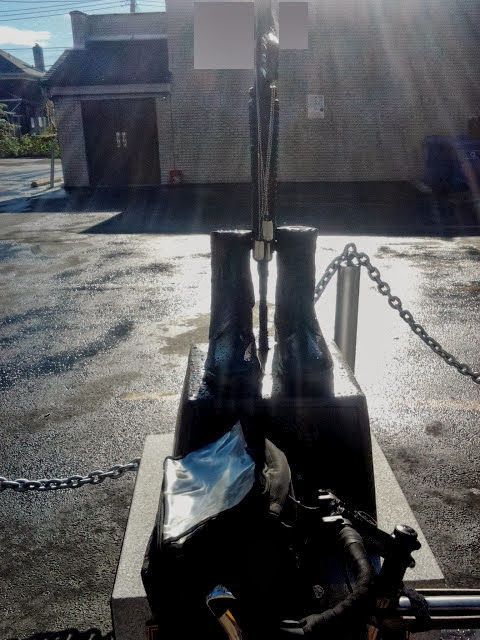 Jon, you got me! Obviously my game is not up to the current level (which is what happened last time: snooze→lose; sigh→argh).

But your tag: what’s with the two rectangles in the top middle? (The ones with the wrong-ways gradient.)

At some point, way back when, I think the game decided that fooling with proffered tag images was not ok (the case had to do with shifting the colors on a mural).

Help me here. I want to spend tomorrow on my bike…

I think it’s Ok to fool with the photo if you’re blocking out identifiable marks.

But you’re fooling with what people will try to look for.

I had to visit the Larimer site three times (day, morning, evening) before things were right. (During work hours the’re trucks in in front and the doors are open; for the week-end work would not be happening.)

The world is not predictable, and that’s ok. But we shouldn’t fool with it. Could you have chosen a different perspective (though I really loved the one you chose)?

Some previous tag photos have been altered like that (for instance, Jon’s tag 450, Welcome to Frick Park), but I don’t think anyone complained at the time.

The “colors on a mural” discussion you remember, I’m guessing, was about tag 75, Flag Mural. It never evolved into a formal rule though.

I think the result is nicer when such content is just cropped out, or artfully blocked Austin Powers-style. But if some player has just returned from a long climb up a hill with a beautiful sunset photo, and only then notices a building address printed right there in the middle, it seems mean to say he has to go back and try again. Perhaps the rules should discourage but not prohibit this type of alteration, and say the tagger must point it out?

But if we do decide to prohibit this from now on, I suggest it should start with the next tag, not Jon’s current one, to be fair.

Good enough for me.
Didn’t mean to sound all that picky, but I get that way sometimes.

Jon’s clues were more than adequate to figure out the location (though I didn’t really get that “jock” bit.)

So, where is this, exactly? I don’t think I’ve ever been past this.

StuInMcCandless wrote:So, where is this, exactly? I don’t think I’ve ever been past this.

Cut&paste latitude-longitude into maps.google.com and it will show you exact location. :)

The “jock” thing made me first go by the local playground (the one next to the old-folks home), just to be sure. But then the VFW is next to a pub, which also seemed like at “jock” thing. While I was snapping. this fellow waved at me and insisted that I take a photo.

He does have a jock-ish appearance. And Now I see that the pub currently features pumpkin shandies. How could I miss that? Too focused on the tag thing…

This gentleman also suggested that I go around the corner (to the east) where I could find another interesting (“ugly”) thing to snap. Sadly, I did not follow his advice. But it’s there, in the back of my mind.

In any case I was very relieved that the “jock” thing did not mean that I had to climb that totally nasty Greenwood hill.

FWIW, Google’s Streetview of September 2012 shows a different memorial there, a plainer one with a little flower bed.

@Ahlir, those are all better uses of “jock” than mine.

What is a “shandy”? And what flavor are they usually?

shandy is beer mixed with lemonade or with some other carbonated beverage, often lemon pop, cider, or ginger beer.
https://en.wikipedia.org/wiki/Shandy

How about “east is east and west is west, but this truly is West”?

If you want to Home in on this tag, I would head east (something that’s much easier than it used to be).

Back in July, I dropped Tag 709, which disappeared before it could be picked up. A day or two ago, I noticed that it reappeared, in the same spot.

I don’t think that has ever happened before in this game!

@buffalo*2 – So I see. What makes that irritating is that I grabbed the link from the “#” on that post.

Anyway, it was this photo, from this post. (Note: Not the current tag.) If you get here before 7 this week or next, you can see not only an excellent fence mural, but a fabulous concert as well. Shadyside nursery on Ellsworth with campV i thought the shadyside nursey fence looked familiar,
i used it as a tag about 2 months ago.

Blue is the bird that lives near.

Green is the bottle of the rock beer.

Lazy pickup (on my commute). Melwood and Heron.

“Blue is the bird that lives near” ?

Worst clues ever. I guess he was referring to the great blue heron.

I don’t know about ‘worst ever’, but I did think it was a reference to the Bluebird cafe in Downtown…

Next time I’ll just give you the map coordinates, that should keep the whining down.

Worst use of Comic Book Guy’s catchphrase ever.