Kings and queens and others besides
Might use this pool, which you find on a ride 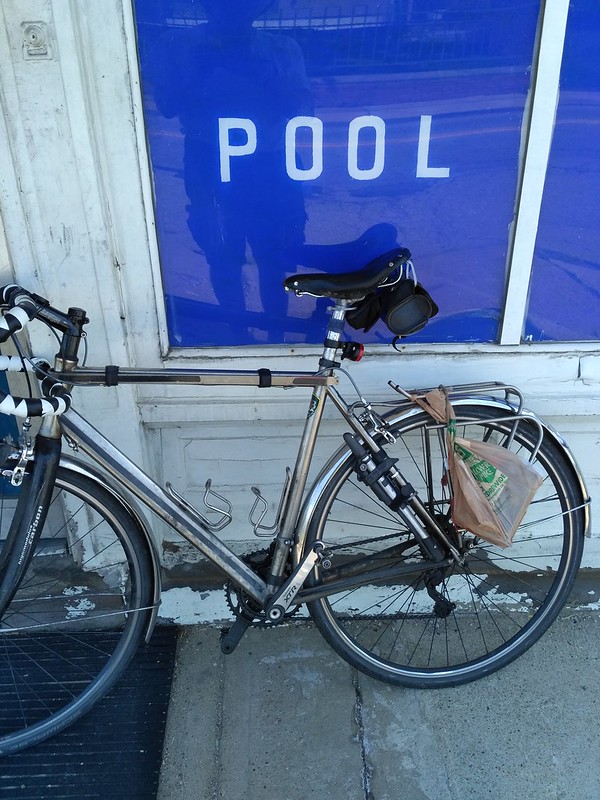 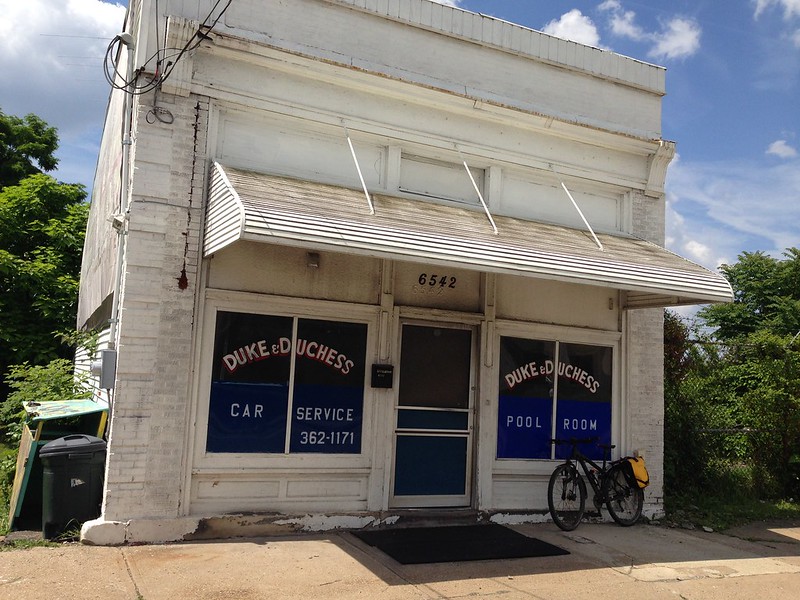 Isn’t it a Brilliant idea not to include bike parking?

That business is owned by a borough councilperson who has been working on this issue amongst other.

Did I get the tag right?

My two cents, you could have been a little closer to the bridge, but it’s the right bridge from the proper side, looking in the correct direction. I think Paul was up in those bushes ahead of you.

Close enough for me.

This is a route that @gg recommended to get from near the zoo parking lot (Heth’s Run) to the Washington Blvd oval: http://bikepgh.org/message-board/topic/butler-street-under-highland-park-bridge-and-ohio-river-blvd/#post-339542 . Biking on that gravel is possible but not fun. But it’s better than biking on Allegheny River Blvd and getting killed.

While exploring @gg’s route today, I ran into a nice Iranian couple that spoke only a few words of English (they asked me if the could get out near the lock and I pointed the way).

I also saw someone with an ATV traversing the railroad ballast. 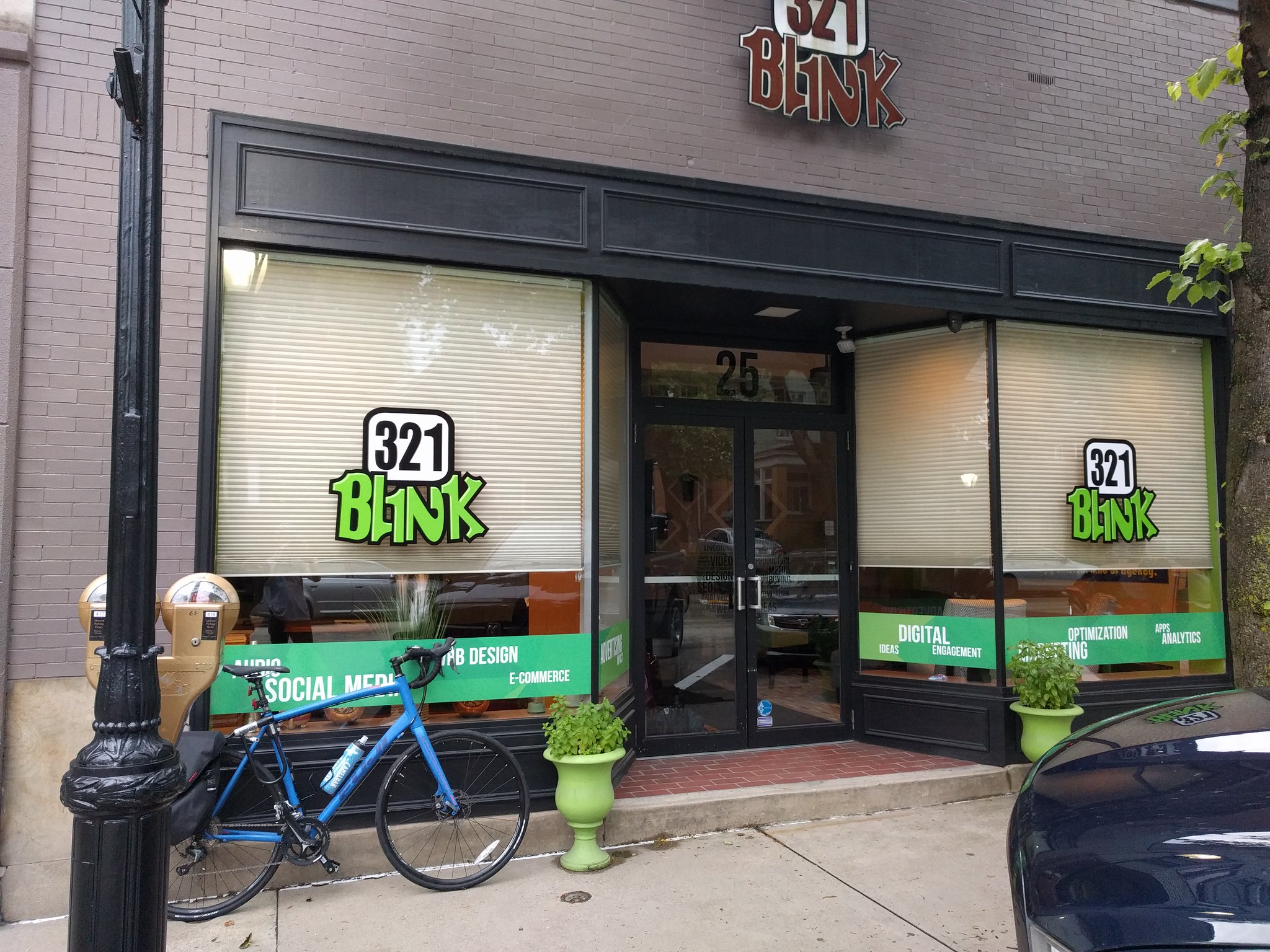 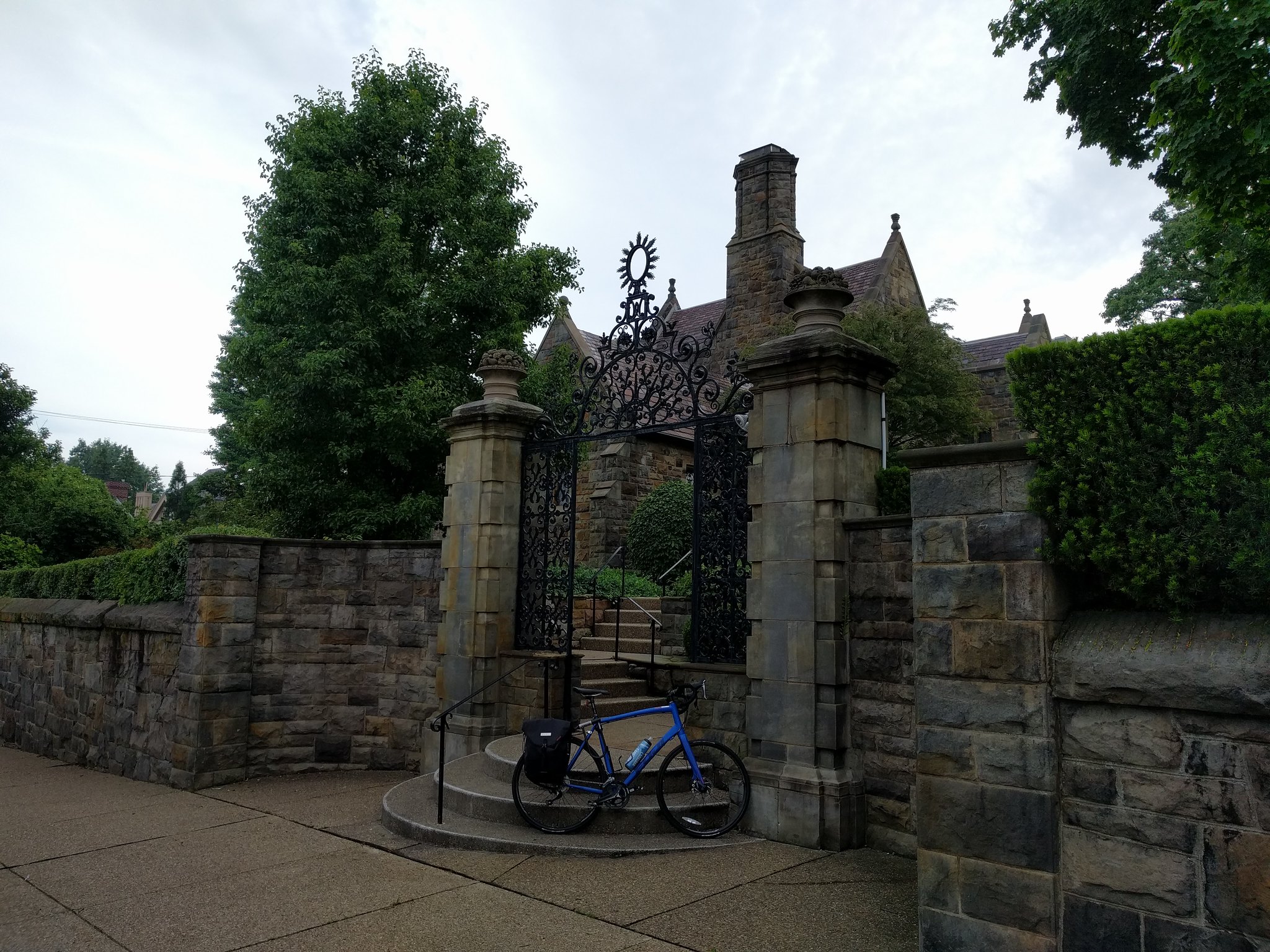 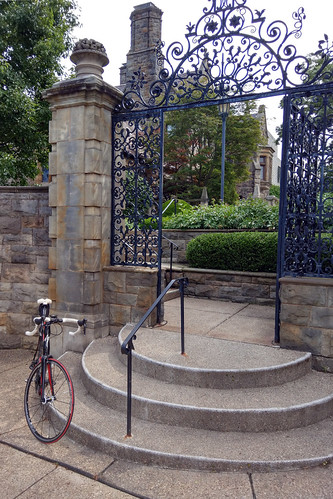 A mere one mile ride, round trip! I guarantee the next tag will require a longer ride…

And it’s the first photo taken with the new cell phone. ;^)

It’s the weekend, so this one’s a bit further afield than usual. In fact, it’s about 2.5 miles outside of the box. There’s some climbing at the end, but not ludicrously so.

I don’t want this one to cause as much consternation as ol’ Bigger Street, so this time I’ll actually show you the street sign. Howboudah? 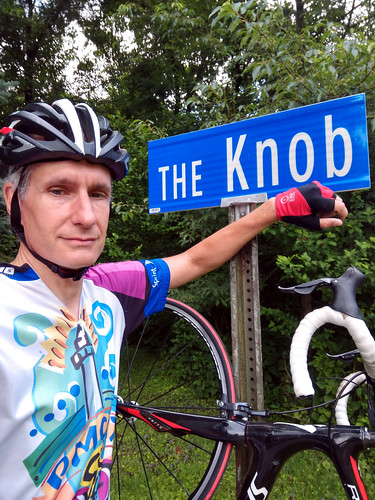 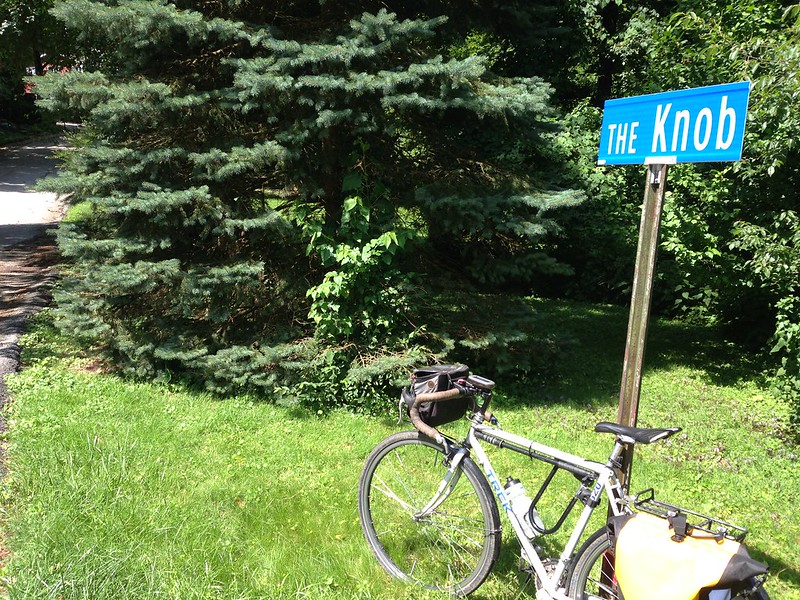 admission: bicycle is outside the box

hint: the distant hillside is not 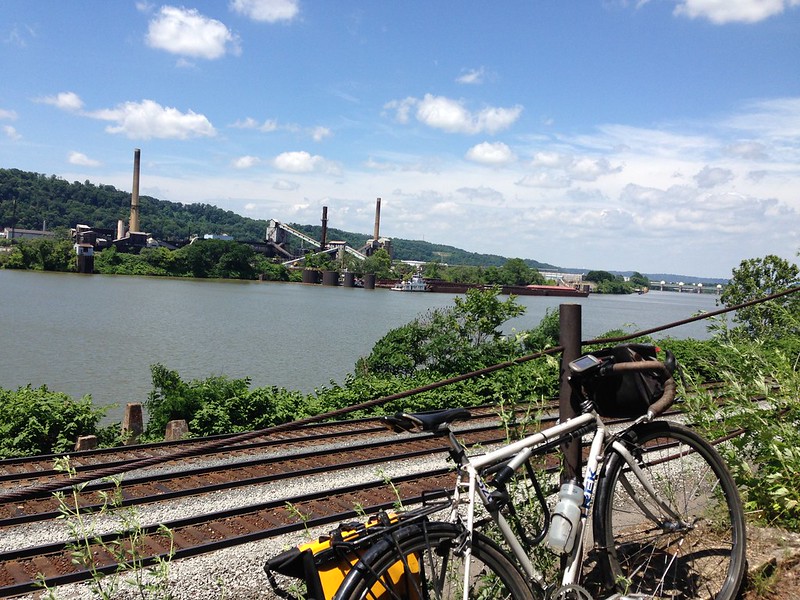 Here’s a link to the map on page 1 of the Tag-o-Rama thread. The “box” is the blue rectangle.

We have had a few tags outside the box, but it’s generally frowned upon. It’s just too far for many of us to travel.

The point of the game is to encourage riding, and finding new and unusual things, or something with an obscure history, merely by trying to identify the site — and usually not being too obvious about it.

There is also an accompanying spreadsheet listing all the tags, what they were, who set them, and who found them. See Page 1 of this thread.

I find it fun to go back through some of the older threads and see if the tags are still around. Some are, some are not. A couple of anchors, the 8-foot-high “@” sign, the hopscotch poetry on Smallman, the trees chewed by beavers. Just gotta look for stuff. Also there is a train track so I had to make a try for this tag.

Yay! I really wanted that one, but just couldn’t make any saddle time.

Since we’re supposed to get in the neighborhood of 2.5″ rain tomorrow, I’m OK with delaying setting the next tag until the deluge is over.

Pictured there is Shenango Coke Works on Neville Island, which shut down in early 2016. http://triblive.com/news/adminpage/9650422-74/shenango-employees-coke . It was one of the largest air pollution sources in Allegheny County.

Nice weather, today. A new tag would be good. Sorry for the delay, yesterday turned into a house work day.

This is half way up #7 of many hills  in pittsburgh

Really, as one of the few people who would have to ride downhill to get here, I should grab this this afternoon, but it’s a house work day for me, too.

Argh.  Was just there a bit over a week ago.  Not likely to get back anytime soon, though.

I have a slightly flatter second option in mind if the consensus is “not worth the climb”.

No, somebody will get it, eventually. I may, even.

Fixing a flat tire and waiting on an important phone call. But don’t wait for me. 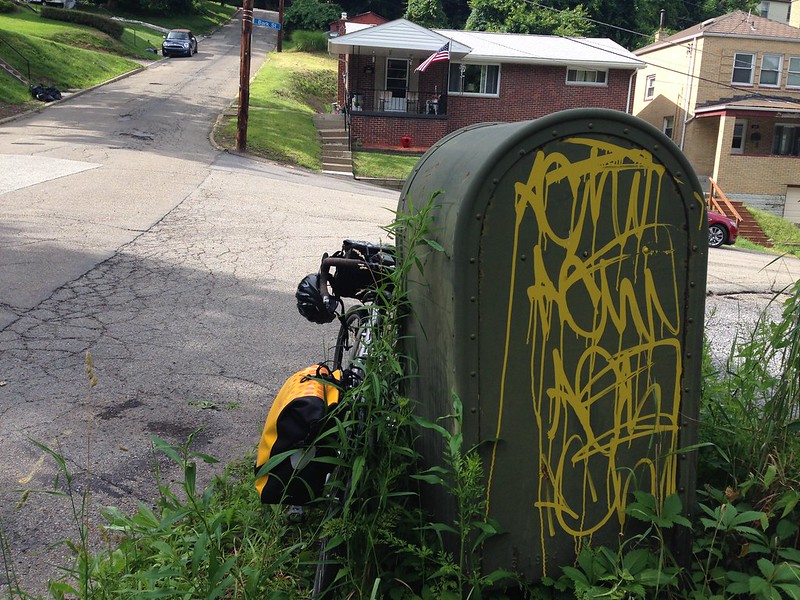 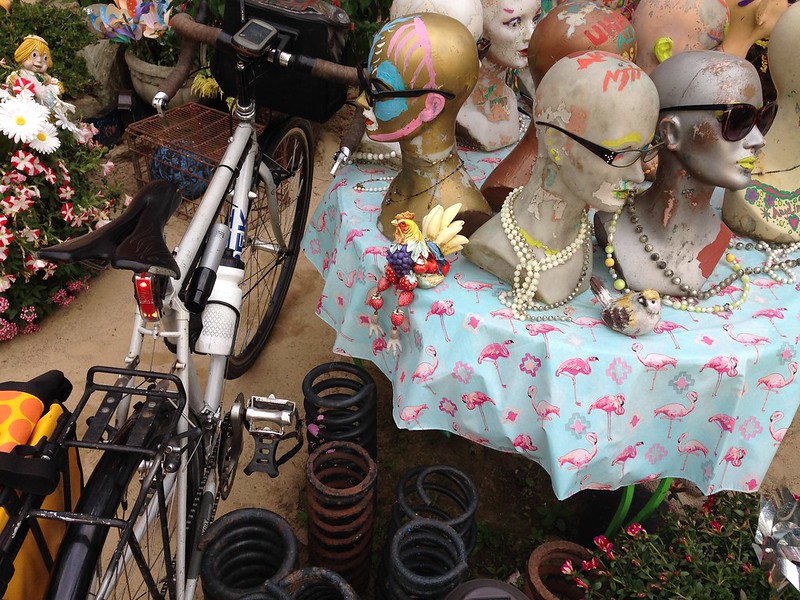 Hmm. I’d be very careful of rolling a bike in there.

Can you get you Mexican fix there?

I was invited to bring my bike in.

I don’t know what kind of Mexican fix you’re talking about, but I think the answer is no.

Is it near a Crazy Mocha though?

This tag is roughly eight blocks from a CM, and no serious climbs needed. To possibly address your earlier question, Zach, if you were making a reference to the Mexican War Streets, then that, too, gets you in the general area.

I suppose it’s possible, though, that you do not know this place exists. Here’s a video I made one day, just walking around (the bike is parked outside). The place is magical.

Biggest danger is that the owner talks your ear off.

Suggestion: people other than the tag-setter shouldn’t give hints that amount to a total giveaway.