Did anyone on here ever ride in it? I’m trying to learn more about this famous Pittsburgh ride of yore. I’ve found a couple of articles online and am planning a trip to the Carnegie Library to dig up more. I’m curious if it was car-free or not, and how many people rode in it.

I also found that it featured a “Celebrity Slow Ride” which I guess was Pittsburgh celebrities riding bikes a short distance as slowly as possible. Anyone know which celebrities took part?

I think I remember seeing pictures in the sports museum at the Heinz history center with bicyclists in it. Did pgh used to host a pro race?  I think? those pics were from the 70s or 80s

Here are some cycling jersys  in their collection.

Your thinking of the Thrift Drug Classic, right?
http://aforathlete.wikia.com/wiki/Thrift_Drug_Classic

Yes.  That was it. That’s what the pictures are of at the history museum. Thanks

The Internet Archive has the city’s page about the Great Ride, with some info about it for 2000-2003 (its final year, from what I can tell), if you click around on the timeline. Pittsburgh Press articles suggest it may have started in 1984, with some celebrity riders like Gene Collier in 1986, at least. June 29 1986 OCR:

Great Ride’s $31,500 tops goal ed last year’s by $14,000 and 700 riders, according to The Pittsburgh Press, Citiparks and the Ostrows, all sponsors of the event. In three years, the event has raised $56,000. In a contest for fund-raising par ticipants, Duane Hill of the North Side won a trip for four to Disney World via Eastern Airlines. Robert Druga, representing Mellon Bank in the corporate category, won a trip for two to Nassau; and Mike Agan of This year’s Great Ride raised the second-highest amount for a one-day fund-raising event by the Press Old Newsboys Fund and was the city’s biggest cycling event. About 2,600 riders took part in the event, held last Sunday at Schenley Park, and $31,500 was turned over to Children’s Hospital for the new hematology oncology unit. That amount is second only to the $60,000 raised by the Andy Russell Sports Celebs golf tournament last month. “Our goal was $25,000, so you can imagine how happy we are,” said Harvey Ostrow. The Monroeville insurance salesman and his wife, Ellen, pledged to raise $250,000 for the new unit in memory of their son, Marty, who died of cancer. In money raised and in number of participants, the Great Ride exceed Upper St. Clair and Celeste Marchel- letta won video recorders. Bikes were given to Martha Fidangue of Squirrel Hill, Ken Marino of Crafton, Bernard Liebergebell ot iwtn Hills, and Tom Schultz of Brookhne. Contributions may be made by sending a check, payable to the Great Ride, to Harvey Ostrow Associates, 2550 Mosside Blvd., Monroe ville, Pa. 15146

Interesting that it ran for 20 years, but 14 years later, it seems almost forgotten.

Nice find with the wayback machine. Thank you!

Wondering if anyone could find a cue sheet or map of the routes. That might require looking offline. 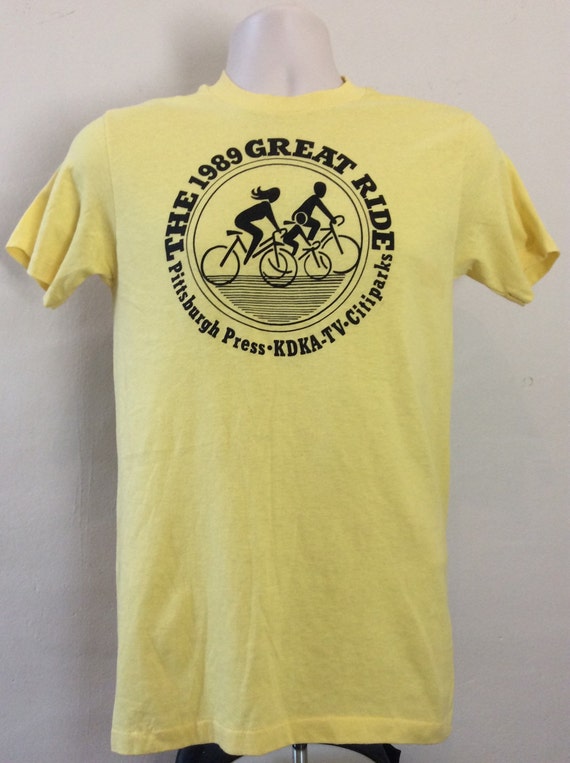 T-Shirt from the ride on etsy![/caption]

Here is the cue sheet from the way back machine.

I put it into Ride With GPG

Things get sort of funky in shadyside. I’m not sure why they double back so many times.

Nice work mike! Thanks for sharing.

That’s quite an interesting map, with many good route choices (West End overlook!), and some that are iffy. Of the latter, I can note the use of the West End Circle/West Carson (though I guess in 2000, the current, faster configuration of the WEC didn’t exist), Allies through Oakland and Schenley, and Beechwood from the Greenfield bridge until Hazelwood Ave.

Also, was the Davis Ave bridge in Riverview still standing back then? Looks like it was.

This says the Davis Avenue bridge was strengthened in 1986, then torn down in 2009. It was closed in 2001, the year after that route map, so presumably the last few years of the Great Ride went a different way.

I think the bridge was still open to peds until it was torn down. I mean, i went across that bridge all the time on a bike when it was closed, but don’t remember if it was “officially” open to peds.

Google maps. The sidewalk was clearly just open, so maybe they still sent people across it

By 2009, I was biking all over the place in earnest. By then, it took some work to get past the fence at the ends of the bridge. I suppose you could have dragged a bike through it, but it would not have been easy. I didn’t try it.
(Off topic but related: I did drag my bike through a similar “opening” in one of the closed Montour Trail bridges in 2011, since rebuilt. It was not worth the effort. Aside from nearly falling through in several spots, I tore various bits of clothing. I haven’t been so keen on thumbing my nose at “bridge closed” signs since then.)