New York City was forced to drop speed cameras in school zones due to politicians not renewing the law.

A different perspective appeared in the current newsletter of the Outspokin’ Wheelmen, a bike club in Youngstown, Ohio.  The author is Frank Krygowski, who has been a certified Effective Cycling Instructor and frequent newsletter contributor for the past 25 years or more.

As OSW Safety Chairman, I’ve said a lot about being skeptical of weird bike facilities.

First, I don’t believe weirdness is needed. I have decades of riding experience, I’ve studied bike issues, I’ve seen tons of data, and I know that competent riding on ordinary roads, following the normal rules of the road, is extremely safe.  It’s literally safer than not riding at all, since bicycling’s benefits far outweigh its tiny risks.

Second, I don’t think weird facilities (otherwise known as “innovative”) necessarily make riding safer.  Traffic needs clear rules that everyone knows and understands.  When “innovation” is thrown in, the rules change and people get surprised. “Think quick!  Here’s a surprise bicyclist!” is a recipe for disaster.

But there are hundreds of bike advocates who disagree.  They love “innovation” and think that stodgy old engineers are harming bicycling.  Their mantra seems to be “Every bike facility is a good bike facility.”  They’ve pushed for bike lanes even in door zones.  (Surprise!  A door is going to pop open right in front of your bike!)  They’ve pushed for hidden “cycletracks.” (Surprise!  A fast bicycle is popping into an intersection from behind parked cars!) They seem to say “Hey, it’s innovative!  What could go wrong?”

Here’s a report on what has gone wrong.

First, let’s talk bike boxes.  These are green painted boxes all the way across a traffic lane, just before the crosswalk stripe. Several years ago, Portland painted these at eleven intersections.  Why?  To prevent the “right hook” deaths that the bike lanes near the curbs had caused, when vehicles turned right and ran over straight-ahead cyclists.  Supposedly, the boxes would mean a cyclist could pass cars at a red light on the right, then safely sit out the red light directly in front of the cars, nice and visible – and, um, never mind what happens if the light is green.

So how did it work out?  Well, more people did ride their bikes, probably because they were told the boxes were safe. But in the four years after the bike boxes, there were twice as many right hook collisions at those intersections. (See tinyurl.com/portl-box )

Why didn’t the bike boxes work?  Because the cyclists felt safe passing on the right when the light was green.  And because it’s very difficult for a right-turning motorist to look back over his right shoulder for passing bikes, while steering around the curve and also watching for pedestrians up ahead.  All this is just what the bike safety experts from around the country had been saying!  But those stodgy old guys just aren’t innovative, you know?

Regarding #Adifferentperspective. The reasoning is grossly flawed with faulty and unsubstantiated rhetoric. First Frank laments, “First let’s talk bike boxes….” and proceeds to lambast bike boxes; he makes his point which one can accept or dispute. But there is no “second.” Is this the extent of his argument or possibly this is an abridged version of his diatribe??? @jonawebb please correct me.

Second…his earlier arguments are pure unsubstantiated opinion regarding very general topics…e.g….all innovation is weird..bad..unnecessary…dangerous…etc… I suggest rereading his missive with as critical an eye that he presents and I think you may just hear the the siren song of an angry old man uncomfortable with change and selfishly focussed…which innappropriate for the “advocate” he claims to be….then again, you may not…(but I had two points…)…

[a single data point, bike boxes, is used to damn and “dam” all innovation…]

Regarding the post above about the article by Frank Krygowski:  Is there a link available to the full article?

I didn’t post the original article but I think this is what you’re looking for: https://www.seattlebikeblog.com/2012/10/16/pdx-study-downhill-bike-boxes-may-increase-collisions/

Time for vehicular cyclists to check their privilege at the door and get under our tent once and for all.

here’s a picture of frank

I believe the article was abbreviated for the newsletter.  Perhaps, the rest of his thoughts will appear next month.  If so, I’ll pass them along.

By presenting this, I was not necessarily agreeing or disagreeing.  Just putting it out there for consumption and/or discussion.

The questions I must ask, regarding some of the new bicycle infrastructure are, Does everyone riding a bicycle understand how to operate in  these lanes or boxes?  Does everyone driving a motor vehicle know what to do in such situations?  Are we willing to sacrifice a few lives and limbs for the sake of the learning curves?

This Summer, on several occasions I’ve found myself in the bike lane on Schenley Drive, where it ends (begins) at Roberto Clemente Drive.  What is one supposed to do there, when the light changes and there is traffic?  Is one, (A) To assume that drivers will defer to a cyclist and cut diagonally across the lanes to get into the normal travel flow? (B) Go up on the sidewalk, to one’s left and ride down to the next intersection?, (C) Just wait there until there is a break in traffic and then cut over?, (D) Something else entirely that I haven’t yet considered?  Most of the time, one can catch a break, of one kind or another, but could also be a potential problem.  Frank would definitely call this little piece of infrastructure a bit weird.

I agree with that. Having both directions of bike lanes on only one side of the street is super weird for everyone. Cyclists, peds, and cars.

There is a huge difference between critiquing poor bicycle infrastructure design, which almost always results from deference to motor vehicle flow and storage, and full-on advocating for vehicular cycling, which has resulted in exactly zero increase in mode share nor increase in safety in the 40 plus years people like Frank have been pushing it, personal anecdotes aside.

I agree but it’s worth noting that the vehicular cyclists were fighting against the idea that cyclists be limited to riding only in bike Lanes. They’ve largely won that fight. I think that’s good.

On the DC biking couple that was killed on Tajikistan: https://www.nytimes.com/2018/08/07/world/asia/islamic-state-tajikistan-bike-attack.html?action=click&module=Top%20Stories&pgtype=Homepage

Re: Bikes Dumped in Dallas

Reminds me of the China story earlier this year…

Terrible tragedy, may their light overcome darkness by shining eternally. 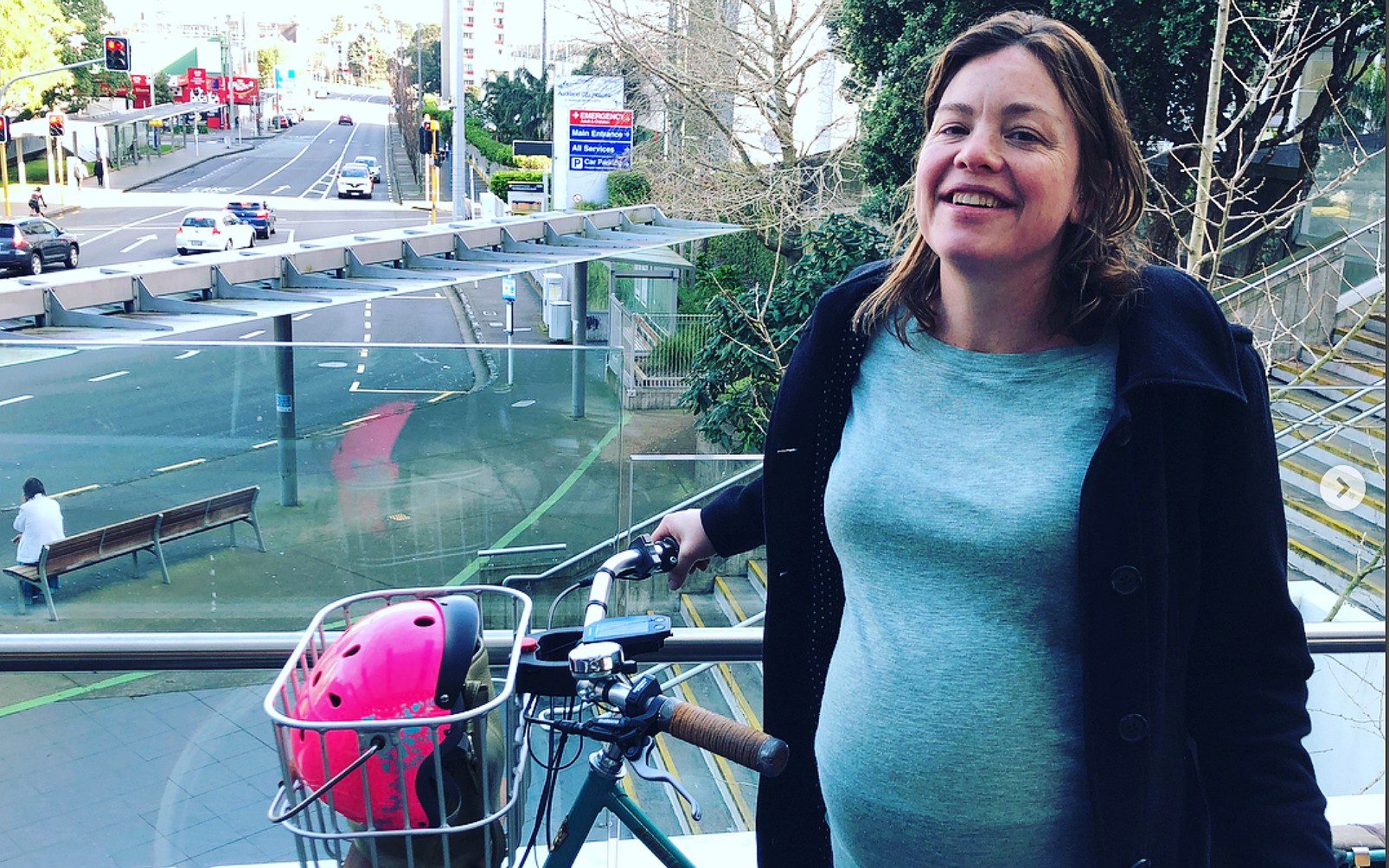 Florida man on I-95 w/o helmet. No clothes either.

Cyclist who flipped off Trump (and got fired for it) is running for office.

THE EXQUISITE, INTRICATE INSANITY OF RIDING A BIKE AT 168 MPH

She is doing that in the wake of a car.

Yes Zak, and she’s a real bad-ass pushing over 700 Watts of power while risking her life!

Unfortunately it was only for a misdemeanor of failing to yield the right of way.

The parish council formed a committee to study possible steps to enhance safety. And that group voted Wednesday evening to pass three recommendations along to the full council, which could in turn vote those suggestions into law in coming months — including requirements that bicyclists wear fluorescent garments and ride single file in groups of 10 or less.

20 people die in car crash at a notoriously dangerous intersection in upstate NY. And NY Times uses the “A” word.

Remember Heather Cook, the (now-former) Episcopalian Bishop who while driving drunk* hit and killed a man biking outside Baltimore in 2014?

She was convicted, and sent to prison…and now wants her sentence reduced. From the Washington Post: Ex-bishop who fatally struck cyclist seeks sentencing change

Heather Cook has asked Baltimore Circuit Judge Timothy Doory to change two of her four sentences from consecutive to concurrent status. That could cut two years off the seven-year sentence Doory imposed for the 2014 crash that killed Tom Palermo.

Maryland apparently doesn’t consider vehicular manslaughter or hit and run resulting in death to be violent felonies, so this could mean she gets out as early as next month.

Several #bikeDC folks are sending a letter to the judge this week; if you’d like, here’s how you can do the same:

Action item: You can send Judge Doory a letter this week at this address:

Please reference Heather Cook's request for modification of her sentence in the letter.

(* to a stupefying degree, still nearly three times the legal limit when she returned to the scene half an hour later…)

Reminds me of one of my favorite websites. Mind you this bridge has all sorts of lights and warnings but this keeps happening

From Bicycling Magazine’s review of top US cycling cities, a discussion about Columbus, OH:

What happens when you ask a traffic engineer to go riding with you? “They see the street differently and understand why a design does or doesn’t work,” says Catherine Girves, the executive director of Yay Bikes!, Columbus’s advocacy group. In 2013, a local DOT official asked Girves for feedback on a project. Girves suggested to the official that they go experience the streets as cyclists—and actually see and feel how the design could be improved. In some cases that meant moving bike lanes out of drain-studded gutters. In others it meant creating better ways for bikes to navigate turning cars. Columbus’s first “professional development ride” was born, and now it’s a regular part of the state’s bike infrastructure design process. “It was like we watched a lightbulb go off,” she says of witnessing the engineers navigating sub-par bike lanes strewn with glass and drainage grates. Columbus started the program, but now Girves and her colleague travel all over Ohio doing “professional development rides” with various city DOTs. … the city’s police chief is a cyclist who rides regularly on the roads. “It’s been amazing to have a chief that ‘gets it,’” says Girves.

My takeway from this is that we missed a great opportunity years ago to call Bike Pittsburgh “Yinz bike” instead.

The widespread failure of American mass transit is usually blamed on cheap gas and suburban sprawl. But the full story of why other countries succeed is more complicated…

There’s discussion in the article that rail lines (abandoned or not) can “easily” be used for rapid transit… which has implications for rail trails… though that doesn’t preclude rail with trail..

This is an episode of the wire frame podcast. It is a show about design. This episode is about the Boston 311 app. It talks about how the design worked well, and they contrasted it with the horrible Pittsburgh 311 app and online system.

To be fair, the show dumped on a prior version of the Pittsburgh app, from years ago. The current one doesn’t have the particular bad design they ridiculed (a long drop-down list of topics). It has a single screen of about a dozen topics.

And as far as the Boston app working well, the podcast ends with them acknowledging that their design, while better than what Pittsburgh once had, and what Boston had before, was causing far more work for their operators, and how they were planning to soon release a brand new version of the app that would eliminate the “select a problem type from this list” notion entirely, and use AI to classify problems described in free-form text.

They believe their new AI will work great, and people will be happy to describe all problems by keying in sentences about them, rather than selecting a problem like “street light out” from a list of common problems. And if not, they’ll just redesign it once again.

Users usually hate it whenever developers completely redesign some software every year or two, just as the users have finally gotten used to the old version. But perhaps their app will be the exception.