Stu asked about zigzag ramps and such. I didn’t find prices for these. Here are some examples:

Helical ramp, (people call this a “spiral” but the proper term is “helix”) Chambly, near Montreal (about the area) 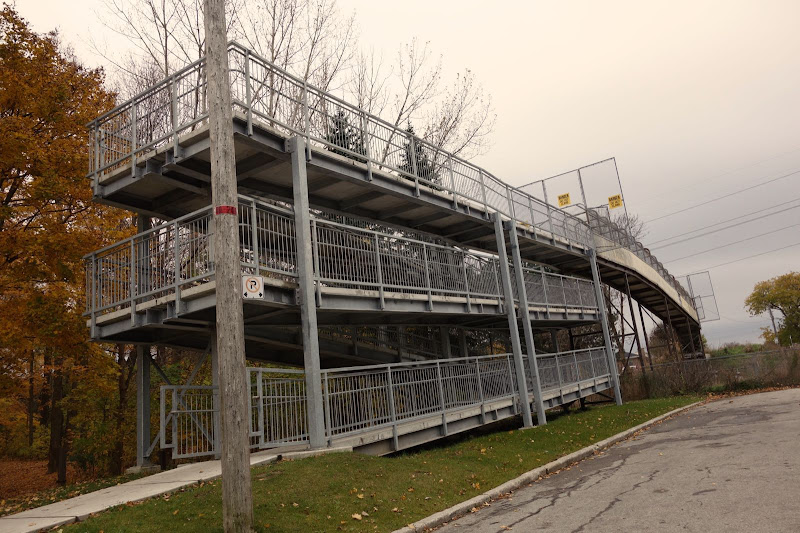 I’ve been on the helix in Portland; it works really well. The problem is that these need space, while zigzags are nice and compact (and cheaper).

I find zigzags annoying: a) sight lines can suck (e.g. Ft. Duquesne Br), b) You’re never sure that traffic coming round a turn will leave enough space (so I usually just stop and wait).

Cars never have to do the almost-stop-hairpin-turn thing when they get on and off exits or bridges. Or so close to “never” that the exceptions are notable. I can’t think of one, offhand.

They would never make the Hot Metal Bridge so that a car had to go the slow and make the steering squeek to get on or off. Like a parking garage.

At this point, I’m happy to have any infrastructure, but this kind of thing will have to change, eventually.

Cars never have to do the almost-stop-hairpin-turn thing when they get on and off exits or bridges. Or so close to “never” that the exceptions are notable. I can’t think of one, offhand.

that’s just off the top of my head…

Not bridges, per se, but there are plenty of places where hairpin turns are necessary:
* Bottom of 28th St onto outbound Liberty.
* US19 Perry Hwy at Township Rd in West View (near-180-degree turn to go essentially straight, no stop sign, occupied building smack up against road edge on outside side)
* Beechwood Blvd at Forbes outbound
* Steubenville Pike inbound to Baldwin Rd outbound, by the Thornburg Bridge
* less well traveled but Sylvan/Waldeck Street, by Bigelow St, opposite the Frazier St Bridge, is a pretty tight turn

that’s just off the top of my head

My impression is that those interesections are mostly places where cars might have to slow down to the 25 mph speed limit. With exceptions for the places with lights.

Can you think of any where a car would havge to slow to the 5 mph or so necessary to navigate the South end of the Hot Metal Bridge by bike?

Can you think of any where a car would havge to slow to the 5 mph or so necessary to navigate the South end of the Hot Metal Bridge by bike?

There’s probably more of these around, but if you start up Greenfield Ave then turn R onto Sylvan (to get to Bigelow and beyond) you will have to negotiate a genuine 180° hairpin turn. Maybe some of the locals have learned how to do it at >5mph, but I wouldn’t try it.

This is not a main road but, hey, people use it all the time.

@ahlir, @mick – See my list. I mentioned the one. The others also qualify. To which I can add:
* coming off Pine Creek Road in McCandless, turning onto southbound Perry Hwy, is only a 90° turn, but it’s unnervingly tight.
* South 18th, the right onto either Quarry St or St Patrick St is pretty tight.

The best example is the West View one, as it’s technically a straight, on a U.S. Highway.

Car blocking the bike lane? Move it yourself.

If you think bikelash is bad in the United States, check out Australia. (via bikesnobnyc). The advice of this video, for both cars & bicycles: don’t be a wanker.

There’s probably more of these around, but if you start up Greenfield Ave then turn R onto Sylvan (to get to Bigelow and beyond) you will have to negotiate a genuine 180° hairpin turn. Maybe some of the locals have learned how to do it at >5mph, but I wouldn’t try it.

Oh yeah! Been there, done that. Both on bike and in car You have to slow down.

I love that Sylvan/Bigelow climb. One of my favourites in the city, and one of the hardest you can find on the East End. I also kinda love the fact that it’s supposed to be a two-way street

Another is the Greeley/Gomer/Sterling climb from Josephine near 22nd to Mission. Not quite as sharp, but more of a climb.

(i was initially thinking specifically of highway ramps, though. There’s quite a few of those around that require a pretty sharp deceleration, even if you don’t have to actually stop.)

This one in Spring Hill-City View also comes to mind:

Also, exit 58 outbound Parkway West requires a significant slowdown. Not quite a hairpin, but as close as you can get coming off a highway

I wish the city could build a multi use bike/pedestrian path along the old sylvan ave right of way to connect hazelwood and greenfield. It’s currently an overgown mess. It could be a great alternative to the closed off hazelwood trail.

I’ve grumped before about biking on Irvine St eastbound, which is really unpleasant. Given 2 lanes inbound and 1 lane outbound, with 95% of inbound traffic using their left lane (part of what makes the outbound cycling so unpleasant), it would be fantastic if the city could manage to reconfigure it as 1 in 1 out with bike lanes, at least for the next few years while ALMONO gets figured out.

Sucky: a cross-country cyclist raising money for affordable housing was killed by a woman who was texting:
http://www.newson6.com/story/29673795/man-bicycling-across-america-killed-in-oklahoma-wreck

This would make so much sense for any number of places around here:

The Columbus, Ohio, counterpart of Bike Pgh! Takes a team of 8 engineers from the Ohio Department of Transportation on a ten mile bike tour of city streets. (le sigh) http://yaybikes.com/2015/07/odot-ride/#more-4966

This bike zipline in Ecuador allows you to use your own bicycle. Maybe this is what we need for cyclists traveling from Mt Washington to the Point: https://www.youtube.com/watch?v=kyiJiuPnN3Q

Some of us Burgh’ers went up to DuBois for a memorial ride when Dr. V was killed & for a one year anniversary ride. It’s nice to see a race in his honor.

Kinda sorry I missed this. I would have tried to make the trip.

Bicyclist dies of injuries in crash with second bike
http://www.delawareonline.com/story/news/traffic/2015/08/04/bicyclist-dies-injuries-crash-second-bike/31108825/

Portland man, after seven years of asking Oregon DOT to fix a sunken drain grate and pavement divot, takes matters into his own hands. DOT announces they will finally send someone out—to remove his paint job.

Minneapolis has an extensive network of bicycle greenways, trails, lanes, boulevards, and “sharrowed” roads. One can get from nearly anywhere to nearly anywhere else on the bicycle infrastructure network.

During Monday (8/3/15) afternoon rush, I was fortunate to have been able to ride, with a friend, on the Midtown Greenway and film it. The film is close to 18 minutes long but I believe worth watching, especially if you’ve heard all the hype about the Twin Cities but have not been able to get there yet.

I filmed some other aspects of the Minneapolis Bicycle Infrastructure, which I would be happy to post. Hope you enjoy the film.

From an editorial in the Chicago Tribune: “Fewer cars? Great.

More bicycles? Yikes. The only thing scarier than driving alongside one of Chicago’s designated bike lanes is driving on a street without one.”

Answers Tough To Find After Cyclist Hit By Chunk Of Concrete

Attacks on bicyclists in South Minneapolis…

Amish bishop now allows use of bikes
“I don’t know exactly how many bikes we have now, but I know it is quite a few,” added Gabhart. “I believe we have around 10,000 Amish in the county. That’s the last figure I heard, so the bicycles are rampant out there and the bicycle techniques are perhaps less than desirable. It just seems like there is a safety issue.”
http://www.washtimesherald.com/news/local_news/amish-on-bikes-creating-safety-concern/article_206f363d-b752-5d09-bed6-c3c4587684d1.html

Ignore the skills issue for a moment (they’ll learn quite quickly I’m sure), can you imagine how positive an impact adding possibly thousands of regular cyclists will have on biker/driver behavior? I hope some organization is taking notice and conducting surveys etc. to document the transformation. There’s a unique experimental opportunity here.

Well, to mash up the last two headlines, when are these intersections coming to Lancaster? Seems only fair that a city poised to have a high bicycle mode-share should get some decent infrastructure!

In other news, bike lanes by this can get a new association… humble folk trying to get around in a way that accords with their beliefs. I’ve never understood trying to angle for bicycles using the “young urban professional” line… yes a lot of stats skew that way, but it’s so much larger and there’s so much smugness painting it that way that’s really off-putting. Related, but can we please revive safe routes to school in this state??

City Councilman Mike Bonin, a major backer, said the changes are needed in part because the city has a “legacy of shame” when it comes to the number of automobile fatalities involving children and senior citizens.

“This is a document that helps us prioritize public safety so that those who are walking and bicycling and trying to get around [without] a car don’t get killed,” Bonin said.

Amish bikes: interesting. I remember on CtC seeing an Amish kid paddling along on a bike (no chain). Also an Amish woman on Rollerblades, carrying a basket of vegetables.

@jon, my understanding of the issue of whether Amish are allowed to ride bikes or not is a local bishop decision. In Lancaster, PA the bishop says no to bikes, but push-scooters and rollerblades are ok. In eastern Ohio bikes are allowed but they shouldn’t be fancy. And still some technology is ok at work (computers, phones, nail-guns, etc.) but not ok to use otherwise.