Another case would be Wm Penn & Stroschein in Monroeville.

South, the fustercluck at 51/88/Glenbury, if there was anyplace to go outside of it.

The problem with any of them is that it’s a chicken-and-egg situation, and huge hills everywhere (huge: > 3% grade) do not invite a lot of newbie cyclists. The people on this board tend to be hardy souls (Federal St, anyone? or Negley?) but hell, even Forbes past Maggie Mo is enough to quell ambition in a lot of people.

That said, maybe an in-city corner with a lot of bicycle traffic like Centre & Highland? Liberty at the Bloomfield Bridge? Liberty at Herron?

McKnight, with the right light timing and lanes, could be faster with only 2 main lanes.

^^underneath=meaning this should be overhead.

McKnight, apart from the insane traffic, is a very pleasant grade, once you get past the rolling hills between the East/Evergreen split and the U-Haul. And you can get to that point easily from the river trail, through Millvale, and up Babcock.

In Finland bike roads go below the intersections in many cases and all mail is delivered by bicycle. Red lights and the works in downtown. It is an amazing place to cycle. Wish I could find more pictures.

gg, that’s backwards. The cars should be down there and the bikes up where the shops are. It would also make sitting at the sidewalk cafes more pleasent.

I would appreciate seeing more of those little ramps on the staircases to walk the bike up.

Why two? One for down, one for up, so two bicycles can pass?

No you don’t understand about Finland. They go under only at intersections. It doesn’t have anything to do with shops. It is one of the best countries to ride a bike. Believe me, I know. I lived there for several months. Best cycling I even enjoyed. Pittsburgh is a joke in comparison.

it was only a matter of time, and they may soon exist. Germany has its minuses. If there is a bike lane then you have to use it. And follow speed limit on it which is 15 mph in most cases. Friend of my mine got fined for speeding on a bicycle. :)

Germany has its minuses. If there is a bike lane then you have to use it. And follow speed limit on it which is 15 mph in most cases. Friend of my mine got fined for speeding on a bicycle. :)

I will take all that over the crap we deal with in our backwards potholed filled region. Pittsburgh is one tough place to ride a bike with horrible roads, aggressive self centered drivers and tons of debris all over the place. Lets face it, we are so far behind we will never see what most of Europe has in our lifetimes. It is what it is.

Pic from Vancouver, not Europe: 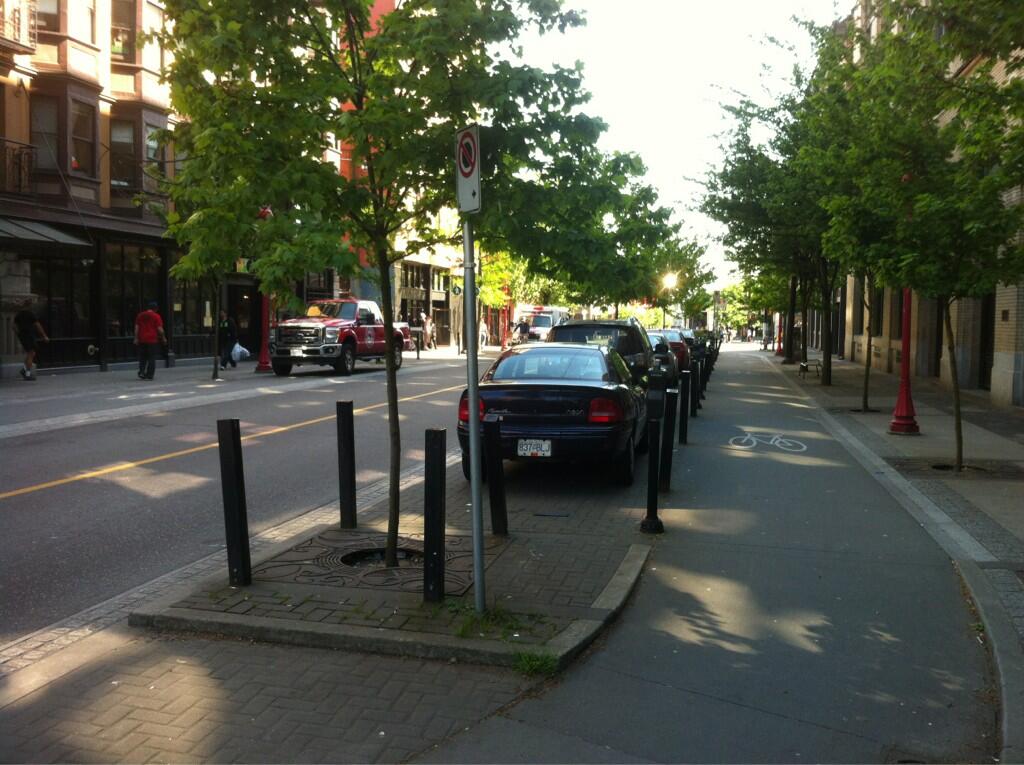 Let’s make this happen on Liberty between Baum Blvd. & 34th St. both ways. You’ll need to lose a few feet of sidewalk through Bloomfield proper, but that would really only matter during Little Italy Days (one weekend per year). City could manage the already existing clusterfuck of foot & vehicle traffic by detouring Millvale to Main via Friendship… why don’t they do this during the festival anyway?

The whole protected bike lane idea is really kind of a no-brainer for getting more bike commuters out on the roads in the city, and I don’t fully understand why new improvements here don’t implement this concept. As long as you’re spending the money, just spend it once to do it right. Don’t come back for a do-over to correct mistakes 5 or 10 years later. (not blaming Bike PGH at all for the city being lack on vision, just frustrated by the red tape in general)

Agree on everything but narrowing the sidewalks. Narrow the traffic lanes instead, which should have the side benefit of encouraging less speeding. If that’s not enough, get rid of parking on one side.

(Paris, Tour Montparnasse in the distance)

I rode in lanes just like that in Philly at the end of CtC.

(Paris, Tour Montparnasse in the distance)

Would love to see this on Smithfield st, downtown. All we would have to do is paint a few markers on that street.

I rode in lanes just like that in Philly at the end of CtC.

Yes, but you were slightly hallucinating by then, Jon. Those were actually chalk outlines…

Well, it didn’t feel like I was hallucinating. I mean, the Arc de Triomphe seemed pretty real.

jonawebb wrote:I rode in lanes just like that in Philly at the end of CtC.

I ride in Philly often, and they are very loosely enforced. Specifically in Center City, cars and cabs go in them often. One thing we should be thankful for is that we don’t have a ton of cabs here. Their blatant disregard for traffic laws is always a fun obstacle.

That being said, Philly is a much easier place to ride than here. Largely due to the flat terrain and the presence of more cyclists, drivers tend to understand how to handle situations a little better.

Glow in the Dark bike paths in England

This video takes forever to load, just a heads up. This is “under consideration” but the costs seemed to be very expensive, I don’t see it becoming a reality with “investors and crowd sourcing.”

Hey, this is in Pittsburgh!

“There are now four warming stations: bus stops with heaters for people waiting in the cold for a bus. The stops are equipped with a heater that turns on with a button you push. They have also a motion detector which can trigger the heater.”
New Bus Stop Warming Stations Getting Rave Reviews

Warming stations? I was at the one on 4th last month and it wasn’t working.

I unknowingly walked into one of the warming bus shelters, on Liberty opposite 9th St, Monday afternoon when it was starting to get bitter cold, and wondered why I wasn’t freezing. It has a button to start the heater, which then runs several minutes.

Good idea: The Netherlands has traffic lights that automatically give priority to cyclists! http://t.co/kSe07YYUIA

“For the cost of about one mile of freeway, $50 million, we’ve built a network of 275 miles of bikeways, that’s one heck of a bang-for-your-buck investment.”
– Mia Birk, Alta Planning and Design

Great quote. It would really change our area if we could get our transportation agencies to begin thinking this way.

I look at that elevator and think, That’s not all that different from our two inclines. Really, part of what we need are to put back a couple of the inclines we used to have.

The Knoxville Incline, St Clair and Penn Inclines went bankrupt and were taken out as recently as about 1960 because of the same tipped tables that made all the trolley and bus companies fold (forming the Port Authority, the phoenix rising from the ashes at the time). But with development again turning inward, I think it’s time we revisit the inclines.

How long is the wait for the inclines? I like digging back into our history and all, but I think a lot of people don’t do multi-modal because they don’t like waiting and running on schedules and… how many cars can you run physically? In a semi cost effective manner? I’m thinking not as many as you’d want.

I kind of doubt the idea would ever get traction, presumably lawyers would kill it, but I very much like the minimalism and continuous service provided by a chair lift like at ski resorts. Wouldn’t be hard to add bike hangars to that.

Or maybe like what they have at the zoo, a covered outdoor escalator. Just add a bike rail to that and I’m a happy camper!

Johnstown, PA (that place that flooded a long time ago, paid for by a, still active, tax on liquor ) has an awesome incline. You can even take your car on it.
http://www.inclinedplane.org/

Built after the Johnstown flood of 1889, the Inclined Plane’s original purpose was to connect downtown with the higher grounds of Westmont Borough in order to develop that area residentially. During Johnstown’s two other floods in 1936 and 1977, the Incline became a lifesaver, helping people to escape downtown as well as to ship supplies into the valley.

The Johnstown Inclined Plane is the steepest vehicular incline in the world, meaning its 30ft wide cars, which are large enough to hold 60 people, 6 motorcycles, or a vehicle, travel at the steepest grade for cars their size.