Transporting a cat via bicycle.

So I get to take my cat to the vet in a few days, and a manager at work is lending me her bike cart (the kind meant for children…it has seat belts so that I can strap the cat carrier in place) in order to get him there (Everyone I know with a car is either busy at that time of day or deathly allergic to cats).

Has anyone ever done this before that can offer some advice? Should I get him a tiny helmet? An invisible bicycle? Will people assume that I’m crazy riding over bridges with a meowing trailer on my bike?

I’m going from approx. Penn/Main to the Humane Society on Western Ave on the North Side. I’m a little worried because it’s supposed to heat up this week, and I probably won’t be able to get him out of and back into the carrier to give him water if he needs it, since he’s terrified of everything and will probably just cry the whole time.

I’ve thought of taking the cat to the vet via bike and/or bus in the past. Always ended up deciding to take the car. It could work with the trailer. Putting a blanket over the cage would be a good idea. Some animals feel safer when covered up like that.

I would approve of that idea if my cat weren’t asocial.

I’ve taken my cat to the vet with travel catged bungied to my back rack.

If I were you, I would go to the cat clinic on liberty in Bloomfield. Isn’t that closer? That will be less time your cat would be unhappy. And they are awesome there. I haven’t transported a cat by bike, but I have thought of bungying a cat carrier to a rack, as mick suggested

Cat clinic doesn’t do spay/neuter. They tried to refer me to some place in Penn hills.

“Will people assume that I’m crazy riding over bridges with a meowing trailer on my bike?”

I live in Regent Square, and during the warmer months there is a lady that walks around the neighborhood with a birdcage on her back with birds in it. You will not come close to matching that level of absurdity by putting a cat carrier on a bike trailer.

But really, everyone knows that cats prefer to ride in handlebar bags:

Oohhh yeah I got my cat spayed at that penn hills clinic. Drove her. Does animal rescue league do it? That is probably closer also

Not sure – I just called the humane society first and made an appointment.

Notice carrier at 0:15 As I recall they were not very happy.

I think whatever you do the cat will be freaked out. They don’t like change. I think the best approach is to isolate it from the environment so it doesn’t worry about where it is. Something like the way they isolate prisoners before taking them to Guantanamo. Little kitty blindfold, cotton in the ears, kitty hood, booties on all paws. Or you could put a blanket over the carrier.

I’d be at least as concerned about jiggling the cat too much, esp on the ride home. The cat is having surgery. How would you like it if your ride home after surgery was on the back of a farm wagon across a field? Not a whole lot different.

Willie’s cat loved the ride over, or at least that was my interpretation of the meowings – I don’t speak fluent cat.

I’ve often wondered about putting a cat on the back of my motorcycle when I have to take her for checkups. My biggest concern is the heat.

You need to teach it one of two things.

This is just the first appointment, he’s not getting the surgery this time. The second time, I might take the bus, if this proves difficult.

So I’m planning on taking the bike lane on liberty, the sharrows on penn through the strip, and the sidewalk from penn, across 16sb, and to east ohio. Any advice on getting around the mess that E Ohio St seems to always be when I’m there?

JaySHerman5000: But really, everyone knows that cats prefer to ride in handlebar bags

We met these people two weeks ago east of Rockwood on the GAP, check the cat on the second bike: 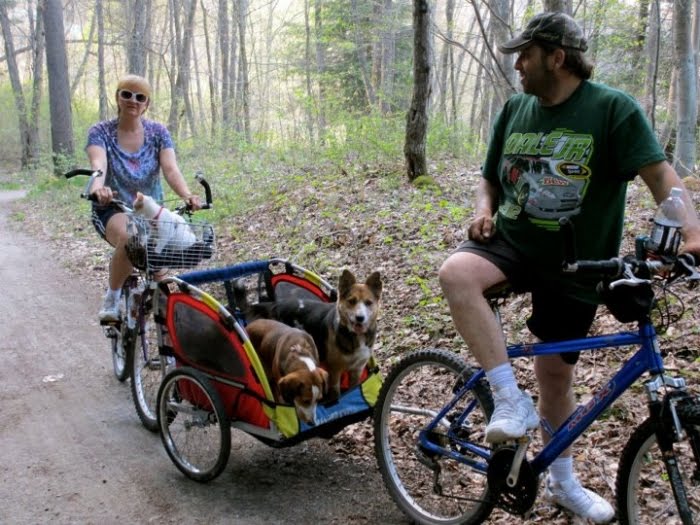 You could get on trail by 16Th bridge get off between PNC and Heinz field follow sharrows past the Clark building through the park, onto western. Just a thought

I think the trail is still closed right before pnc park, right? I would just take east Ohio around allegheny center. Take the lane. Traffic is likely to be a cluster on east ohio street anyway. Just watch for jaywalkers and cars pulling out of side streets. Or you could just go one block toward AGH and take that street parallel instead of east Ohio, but I think that doesn’t drop you on the allegheny center traffic circle.

Ramp from trail up to 7th St by bridge (watch blind corner at top of ramp). Wiggle over to Isabella, which is pavement between 7th/Sandusky and 6th/Federal. R Federal for a block and a half, then slither through the parking lot from the NW corner of Federal and Lacock over to the D.L. Clark Building, R Merchant (up & under the railroad bridge), L across closed piece of Ridge, Ridge past CCAC, R Rope Way, L Maolis Way to back door of the place. Much less and slower traffic than on any of the arterials.

The PNC park section was open a week or so ago when I went through, unless it is closed again.

We’ve been taking our cats to Penn Animal hospital on 22nd/Penn for their past couple visits based on recommendation from a friend. We’ve certainly been happy with them so far, not sure if they do spay/neuter but I would imagine so.

check the cat on the second bike

how can i possibly do that when i can’t stop staring at those bar ends on bar ends?

brought the trailer home today, it was empty, so I went up Penn Ave. Feeling more confident. Maybe I’ll put a sign on the back indicating that there’s kids or animals in the back, and to please give 4 feet when passing.

He knew something was up when he saw this. Ran off and didn’t come back until the danger was gone. He’s so scared of everything.

Try keep the flap open at home, put a nice blankey in there and maybe he’ll go check it out for himself?

I’d also put treats near it for the wee beastie to find, then closer, eventually inside it. That’s what we did to get our one dog to appreciate his crate. He still does a sniff in the corners for treats before he goes to sleep at night, and we haven’t treated him like that for over a month. It only took a couple days.

But I’m putting him in a carrier in the meantime, and he has always been terrified of his carrier.

Going into the reverse keg ride a while back, there was a guy pulling a trailer with a dog (“surfing” the trailer) turning left onto Neville Street from Fifth Avenue.

Okay, leaving in maybe 30 minutes. I’m giving myself 1hr, 15 minutes, and I have 2 full water bottles (and I’m bringing a bowl) for my cat to drink at a few pit stops.

It is HOT outside. Luckily, I have a ride home now, so I don’t have to worry about him dehydrating on the way home (part of which is an uphill drag)

haha that picture of the cat in the basket rules. Reminds me of being a young teen growing up in my hometown. I used to ride my skateboard everywhere and would always pass this older couple that would ride around on their bikes with 2 or 3 dogs on leashes tied to the bike and each bike also had a parrot sitting on the handlebars

A parrot would be most excellent.

My parrots love to ride in the car, but hate watching or riding in/on bicycles, wagons or strollers.

So a couple of weeks ago I was riding from Dayton to Xenia on the Creekside trail and came upon a man riding a bit more slowly than most. As I got closer I noticed what appeared to be a cage on the rear rack, and then I noticed the parrot, perched happily on his shoulder, out enjoying the ride. Sadly my phone/camera was inaccessible and I didn’t have time to stop. But it was cool to see.

There is a guy out in Plum who rides on the Golden Mile Highway with a parrot on his forearm or shoulder. I have a picture and will try to post it. We were coming back from Roaring Run one day and did a double take, turned around, and got a picture of it. Every 50 feet or so it would flap its wings, apparently to steady itself.

I took a vacation in Hawaii last September.

There was a guy taht road on an old beach cruiser type bike with bird on the back and one on his sholder. He’s set up in town and have peopel pay to get their pics taken with the birds.

When I saw him on his way home, the guy was the worst weaver I have seen.

Maybe 5 MPH, about 20- 30 rpm, seat way too low, looked like he was mashing to go his speed. Going from the side of the road across the double yellow and back. Looked like he might fall over at any point.