i understand theres one at whole foods already!

yes those are great. you are correct, whole foods does have one.

I mentioned it to REI in a survey and got an email back saying they are deeply considering the request. Yes, we need more of these for sure.

one downtown would be nice, or an extremely small bike shop for maintenance items and quick repairs. 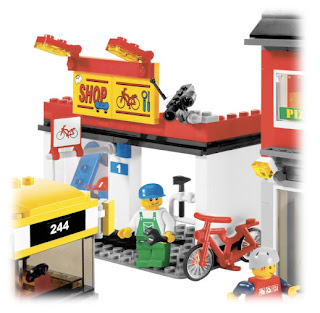 Is that a security camera atop the lego building? Awesome!

“Brick Brother is watching you!”

here’s a shot of the one at whole foods:

It’d be awesome to have (at least) one of these in Oakland, at Pitt or/and CMU…

Any idea whom to contact to plant the seed on?

Pitt now has one although I don’t know where it is. Downtown will have one very soon in a parking garage. You’ll hear more soon.

Reddan, they have to keep an ever viligent watch for The Brickster:

A Duro Fixit popped up at the corner of Murray and Shady in Squirrel Hill (along with a water fountain!).

Looks like part of the renovations currently being done by the building’s owner. This is also where a bike corral appeared a (couple of?) years ago. And two of those peculiar squirrel bike racks.
I’m not sure what to do to signal approval… Get a slice of pizza? Spicy Chinese food? A beer? All three?

In any case, awesome.

How Lee’s mabo tofu is second to none in the city, legit Szechuan peppercorns. Highly recommended. But I would go with all three, for sure, not necessarily in that order, though.

I agree with @JZ.

maybe a good sequence is:
beer,
pizza slice,
beer,
spicy chinese [i like eggplant+garlic-sauce plus a hot-pot],
beer,
beer (or a nice sherbet at the Rita)

I think the Duro Fixit should have a vending machine with common size inter-tubes or patch kit. to prevent hurting business pro-bikes or bike tech should keep it stocked and bring in any profit the city can maintain.

The pitt one is near Forbes and Bouquet under the ped bridge on the Posvar Hall side of the road. It’s pretty busted up from what i remember.

Forbes and Shady, just south of Forbes on the west side of Shady. They also have a water fountain, although I haven’t checked any of that out for functionality.

At CMU, there are 2 fixit stations at the entrance to the parking garage at the corner of Devon Road and Forbes Avenue. (south side of Forbes Ave., follow the driveway just before the enclosed part of the garage and the fixit stations are on your right. Only one of the 2 pumps worked, as of a month ago, but 1 was all I needed and definitely there are useful tools.)