What do you do if you find a stolen bike?

I’ve been reading here for a while but this is my first post. I have a question for you.

If someone posts that their bike has been stolen, and you find it, what do you do?

I actually had the thrill of finding a friend’s stolen bike a month or so ago. My friend put this bike together in a very distinctive way – there’s no other bike in the city, I’m certain, that could remotely be confused with it. So when I came across it cable-locked to a bike rack, my heart started racing. I called my friend but couldn’t reach him. I called another friend who works at a nearby bike shop and borrowed a U-lock and secured it to the rack. Also called the police, but by the time they got there, my friend who owned the bike still hadn’t gotten my message, so there wasn’t much they could do without him.

At any rate, he has it back now, and I’m still a little giddy about the whole thing. Makes me kind of want to spend my spare time cruising around looking for stolen bikes. (This is mainly a fantasy. But then I like my fantasies to be as plausible as possible, otherwise I get distracted and start arguing with myself about technical details (yeah. I know it’s sad. leave me alone. back to the bike question.) so I’ve started thinking about what I’d do if this happened again.)

The bike I found belonged to someone whose number I knew, so that made things pretty easy. I’m thinking about what I’d do if I saw a bike that had been posted as stolen here. (I don’t know if you can post to the board by cell, but my cell phone is pretty basic – I don’t think it even has web-viewing capacity.)

One option I guess would be to ride home and post, telling the owner where the bike is. That leaves lots of time for the thief (or buyer) to ride away though. I suppose I could put an extra lock on the bike (assuming it were very clearly the bike in question) with some sort of contact information or instructions to post on the forum if they feel it’s been reclaimed in error. And the issue about whether or not to call the police was really tricky. Feelings about them vary wildly in the social circles I run in. Given that I could have been seen as someone randomly slapping a U-lock on someone else’s bike, it felt like a safe precaution, but it could have been a mistake, depending on the feelings of the owner. I don’t know. I guess I’d like to see some instructions or preferences in the “my bike was stolen” posts, or, short of that, hear some thoughts of people in the bike community.

Makes me kind of want to spend my spare time cruising around looking for stolen bikes. whoa-you’d be like a bike super hero, fighting crimes, ‘nat.

I would say to contact the police as well. They might not be able to do anything about it directly but documenting it may pay off down the line.

If you have a digital camera, take a picture. Hang around waiting for the cops (if they even decide to come out). If a person comes to collect the bike in the meantime, take that person’s picture. Back off in case he’s insane.

I like the idea of putting another lock on it, even though it is legally dubious and I wouldn’t actually go so far as to recommend doing it. The whining, “I bought it off of someone, I didn’t know” is still receiving stolen goods and illegal.

Thanks for starting this thread, Bikefind. I was witness to a VERY SHADY looking transaction last weekend, where a young man was hanging out in front of a local establishment with a bike he “had to sell.” He did, in fact, sell it while I was watching. The bike could have been his. I really don’t know. But, I tried to get a good look at the bike, and at the seller. When I got home, I checked all the threads I could find on lost/stolen bikes, but found no matches. I don’t know what to do in this situation, either.

whoa-you’d be like a bike super hero, fighting crimes, ‘nat.

Awe, come on Erok. I’ve already had a cape sewn up with my name on it and everything.

@Kordite: Yeah, I do keep a camera in my pack. Thanks for suggesting taking a picture of the bike. I don’t know if I’d have the nerve to take one of the person, but it’d be tempting to try. Bike theft just pisses me off, worse than things that should probably upset me more.

@Swalfoort: Wow. That had to be maddening to watch. Some situations seem like they really ought to have a simple solution and they just don’t. Either that or I’m not sharp enough to think of them.

as luck would have it, i found this image 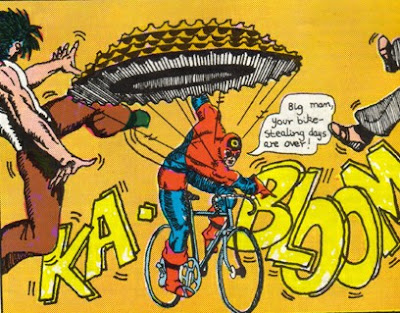 Man, I’d forgotten about him.