What streets need to be repaved first

A separate letter that mentions which streets need to be De-paved would be nice too.

I’m kinda curious how that wooden street in the East End has fared in all this snow. We took a little side trip on it when Caitlin gave us the FPUF tour back in October-ish. Not that bikes are going to be a big factor on a 200-foot street, but getting and keeping it clear must be different, and so must its bike-ability in wet and snowy conditions. Sure wouldn’t have to worry about potholes, anyway.

In teh 1980’s, there was some kind of gas leak upnder it and the gas compay had to replace the entire street.

For 4 or 5 years after that, the surface was smooth and good to dance on while coming back from punk rock bars at 3 am. I could tell a tale or two about that street between 3 and 4 am on a typical saturday.

Then the street got gnarly again, just from winters and use and such.

I’m guessing it’s much worse after this winter – water gets between the wood grains. The street is “parkay” with the grain going up and down, not along the surface.

Bunnyhopping is a skill I’m glad I retained from BMX in the 80’s. Saved my wheels at least adozen times over the last few days, mainly around Garfield, Friendship, Sliberty, & Bloomfield.

Until we get the streets repaved, maybe folks should just do something like this:

1) “Onomatopoeia” is a great word. You can scare undergraduates with it and everything. It’s such a shame that I never will be able to spell it.

2) It’s a great idea. We could do this here. Prolly same folks that shoveled snow.

3) It’s legally questionable. The political ramifications of trying to prosecute such criminality would likely protect the perpetrators.

4) There might need to be a cleanup – you don’t want the “THUNK!” to stay there after the pothole is fixed.

Could you use spray chalk? Or just find out what they use to paint bike lanes, that stuff washes off no problem.

Resurrecting this old thread. Perrysville between Federal and Federal got some hole patching this morning, Mar 20 2012. They were *just* getting done as I went by, and I got some small patch spatter on my pants. No serious reconstruction, just patching the holes, so the surface is still sucky, but at least it’s hole-free.

Here’s hoping friendship gets some much needed tlc this year.

friendship is so terrible between gross and evaline.

neither do I feel extremely safe on with the proximity of parked cars, terrible surface, and race car drivers riding my ass.

and maybe, just maybe, this will be the year that liberty, morewood, and negley get properly paved.

but then again, maybe not.

The rest of Liberty until Baum and the rest of Reynolds. Hopefully the good news is that because of the easy winter there is more money to spend.

The entire length of Atwood Street in South/Central Oakland. I’d be happy to wait until summer when all the college bros and brolinas are out of town. Some sharrows finally between Dowtown and Oakland along Forbes and Fifth would be nice, though something still would need to be done about the stretch of Forbes between the Birmingham Bridge and Craft Avenue. That parkway off-ramp is crazy unsafe for a “typical” person on a bike. Heck, for pedestrians even.

Atwood does suck, but there’s plenty of parallel streets to use that don’t suck as much. RE: Forbes, I doubt you’ll get any response other than “don’t ride it”. Unless you live in the Hill District, the Eliza Furnace Trail pretty much covers that need in my opinion.

There’s a few craters on Beacon St in the bike lane that aren’t so fun to navigate.

Warrington. Please. Some of the other streets being mentioned are pretty bad but Warrington in Allentown is so bad that in many places the rebar in the curb is completely exposed.

Penn Ave in east side is horrible. If they pave that have them put in some bike lanes why they at it. It has significant bike traffic. Also highland ave from penn until penn circle.

Negley Avenue is atrocious through most of East Liberty. I always feel that having the sharrows/bike lane right over the potholes on Liberty Avenue in Bloomfield is adding insult to injury.

Penn Avenue is pretty bad, too.

The part of Warrington that has trolley tracks is due for a complete rebuild in the next couple of years.

(OT) but, has anyone else noticed the phone pole makeover in Shadyside? Totlly new, much taller poles.

Stu, do you know if they’ll be pulling up or paving over the trolley tracks? Or is PAT still maintaining that the Brown Line closure is temporary?

why yes I have, Pseuda.

would be cool if anyone knows why they went with taller poles.

I doubt the Brown Line is coming back, but Warrington is a standard detour whenever there’s a problem in the Mt Wash Transit Tunnel. As to the Warrington rebuild, it’s a city project, but Port Authority actually owns the part of the street where the tracks are, so it’s a joint project, I think for FY2014, pending $ in the capital budget. I’ll ask at tomorrow night’s ACTC meeting.

My guess is with all of the development going on (Target, trader Joes, etc.) they need to bring more juice into the neighborhood which means running additional lines, or upping the voltage of the existing lines. The higher the voltage, the higher the wires need to be – literally.

Marko, thanks for the interesting link. I particularly like the last photo there. 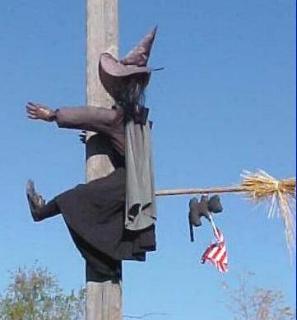 Likely a case of distracted driving. Skywriting is just an early form of texting.

I’d like to see Beechwood repaved. It is a signature bike route in Pgh and it’s trashed. I rode it yesterday (3/21) from Forbes to Homestead Grays Bridge and it’s in bad shape.

How about center ave by whole foods, it’s like the surface of the moon over there.

Maybe we could get a steamroller to flatten out the ‘wave’ on the inbound side of butler street over by 44th street.

Also, I’m partial to fixing the patchwork mess that is Neville ave between center and bayard.

Or a grinder to flatten out those waves. They sometimes form at traffic lights which get a lot more than the usual number of people stopping. Highland at Perry in West View is one.

btw, this would be a great one to catch and put up on the Wheelset of Fortune tag (tag #2), if you know of one.

Pittsburgh to pave 60 miles of street this year

there are some real goodies here for me and some fellow eastenders:

Friendship from Edmond to S. Atlantic

Negley from Stanton to ELB

Stanton from Negley to Highland

Hamilton from 5th to ELB

Ellsworth from Aiken to Spahr

Looks pretty well distributed over all with squirrel hill possibly getting the most love.

Spring way is on the list but not Liberty. Not sure when they plan to start but they’ve already paved Beechwood and Forbes partially. See photo below. They were doing Murray Ave last night, as I was on the way home from FreeRide.

Seems to me Wilkins between Beeler and Fifth should be a pretty high priority… I’m dodging potholes every time I have to go that way.

Does anyone know if these are getting any new bike lanes?

there were rumors of friendship getting some sort of treatment

So, when friendship gets repaved, are they going to immediately repaint the sharrows and finish the bike lanes that should be by the park?

No-parking signs getting stapled up on the ratty part of Perrysville (Marshall to North Charles) this morning, May 2 2012, for paving work. Hooray and hallelujah!

BTW, Ellsworth was closed this morning. Looks like they were getting started with the milling.