Winter did a number on the bike lanes

I’m really hoping the city can repaint some bike lanes after the snow ends. I’m really sad to see a lot of bike infrastructure scraped off the street this winter. I’ve put in a few 311 tickets about these, but maybe not all of them, I’ll try to get ticket numbers.

So far here’s what I’ve noticed:

*Bike lanes inbound on liberty ave have been really worn down and are barely noticeable on several blocks in bloomfield’s buisiness district.

*Immediately after the bloomfield bridge inbound on liberty ave, the bike lane is extremely worn away and barely visible

*Friendship ave, bike lanes around the park are barely visible, mostly on the eastbound side.

*Sharrows on Center ave between neville st and millvale ave are mostly gone.

Where else is this happening?

The sharrows on Forbes in Squirrel Hill seem to be in pretty good shape, though some of the road surface has been potholed. Maybe it’s just newer, or maybe they used different materials there than on Centre?

I don’t remember exactly whether the center ave sharrows were torch down or painted on. I actually think those were the new torch down markings, which is kind of disappointing, considering they were supposed to last longer than paint. I think that maybe they don’t adhere to the concrete (which is the primary surface on center ave) as well as asphalt (as on forbes)?

thanks for making this thread. i’ve actually been tasked to help identify the faded bike markings for the city.

this is the running map that i have, so please keep em coming, and please report to 311 too.

as far as centre, yeah, you’re right. i believe that it is the torch down thermoplastic. however, i can’t be sure of this, but there’s a second step in the process of affixing that stuff to concrete using a sealant, and my guess is that they didn’t do it. also, that surface is so f’d up and ribbed, i imagine it’s just plain difficult.

For what it’s worth, i’m looking for faded:

there’s different crews that would do each, and they want to know if the lines are next to the parking lane or not to determine if they need to remove parked cars. it’s much better if it’s the line next to the travel lane

FWIW, almost all were lines closest to the travel lane (at least on liberty ave). The ones closest to the parking lane in most cases were in much better condition. I think it just happens that when the weather goes sour, more drivers tend to shift their lane position and drive directly on the bike lane markings.

Beechwood blvd only has a single line, closest to traffic, I doubt they would need to move parked cars to repaint.

I’ll see if I can get slightly better detail on the liberty ave stuff. There are several sections that are bad and others that are still acceptable.

cool, i’m pretty sure i have the liberty ave stuff. that’s what spurred this conversation

Thinking about the Beechwood bike lanes, the “bike lanes” on the southern / eastern portion of Beechwood between Brown’s Hill and Monitor St have long been faded. But there also probably shouldn’t be bike lanes painted in there, because they’re almost completely covered by parked cars next to a trail of potholes. Can they just paint sharrows instead? I’d like to see the infrastructure maintained and made more visible, but no infrastructure might be better than a freshly-pained lane that nobody should be trying to ride in.

Now I wish I’d stopped to take a picture. Somewhere on Sunday’s snow ride, I looked down to see as harrow freshly ground to bits by a plow that had passed by just minutes before. All the crumbs were still on a single field of view.

It might have been on outbound Liberty but I cannot say for sure.

the bottom of the uphill bike lane stripe on brereton is mostly missing at this point. i haven’t paid attention to the downhill side. i haven’t ridden in that bike lane all winter long, really.

also, the sharrows on neville are still there, but not particularly visible. i think they might just need cleaned, though, which is a strange thing to think about.

2 sharrows on neville are at least partially covered in cold patch. One is totally cut off, the other is about 1/4 obscured by a pothole.

richierich wrote:Thinking about the Beechwood bike lanes, the “bike lanes” on the southern / eastern portion of Beechwood between Brown’s Hill and Monitor St have long been faded. But there also probably shouldn’t be bike lanes painted in there, because they’re almost completely covered by parked cars next to a trail of potholes. Can they just paint sharrows instead? I’d like to see the infrastructure maintained and made more visible, but no infrastructure might be better than a freshly-pained lane that nobody should be trying to ride in.

I have the same complaint with the Beechwood bike lane after Monitor to Browns Hill. I take this home often as it is towards the end of my ride. This lane forces you in the door zone, is narrow, and allows close passes. Most of the time I am cycling Beechwood at the speed limit and could easily be in the lane without slowing down traffic to an unreasonable speed. I agree that this should be sharrowed instead of a lane.

This also goes for Liberty ave downhill from the Bloomfield St bridge to the Strip. It is smacked up against a very dangerous door zone, and I feel safer in the lane as I am going down hill the same speed of traffic. I don’t like to ride downhill in a door zone and the East Liberty bike lane invites this situation.

I am waiting for the street cleaners to finally get out and start picking up all the cinders and branches. That will be nice.

Sharrows on forbes between schenly drive and Murdock st are very worn away, after Murdock they are fine.

Hope this gets prioritized sometime soon.

Every day I ride on friendship and people don’t even know bike lanes were even there when going around the park. The end of the lanes on liberty by the sandwhich shop are completely gone on that whole block.

Forbes coming down from Squirrel Hill into Oakland (from roughly Northumberland to Margaret Morrison) is a bumpy, rumbly mess. At least 1/3 of the way down, the safest place to ride is a foot to the right of the yellow line, and about halfway down there’s a lump of patch (? asphalt? something?) about two feet wide that could easily cause a wipeout at the 25+mph speeds you can reach without trying very hard on that segment.

No sign of the sharrows through there either. I assume they got patched over.

Benzo – I 311’d Liberty/Main and Friendship parklet on the faded striping. Their response to both: “Request ID# ### has been sent to painting division to addressed Line Stripe as weather permits. Thank you!”

FWIW, tweeting requests @pgh311 seems to be pretty effective. They’ve resolved several of my reports over the last few months.

Saw fresh paint on millvale ave bike lanes this morning on my commute, they were looking good.

Frankstown east of 5th was getting (re)sharrowed earlier this week.

Ok, that was wrong, as I happened to notice today.

I might have been thinking of Hamilton. On the other hand Beechwood definitely got its lines redrawn.
Streets, they all start to look the same after a while…

And since we’re on the subject, here’s my favoritest sharrow: 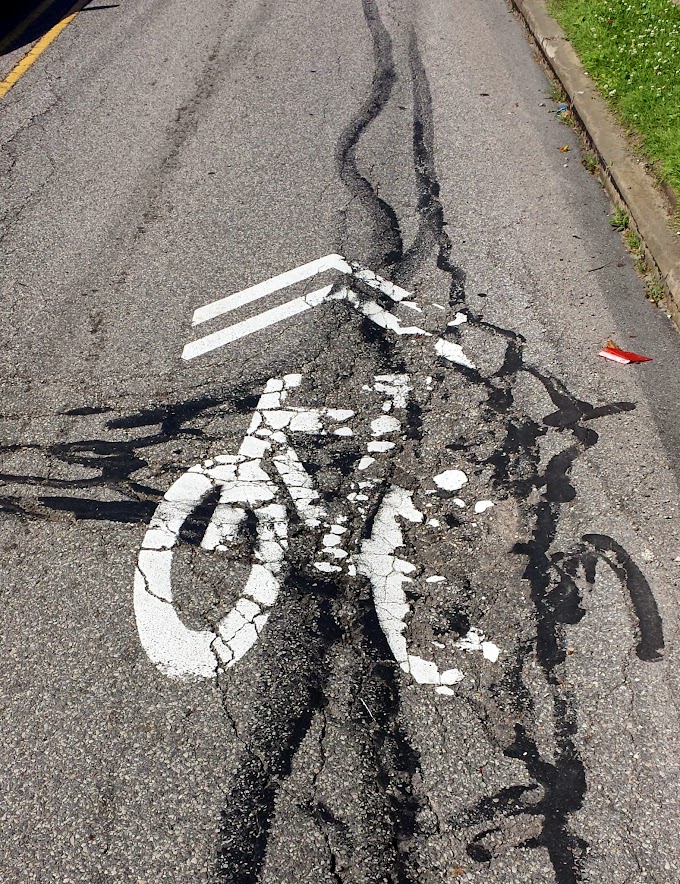 At least they’ve been doing a decent job repaving a lot of Shadyside/Oakland/friendship/e lib. Most of those streets are 800x better than they were in March. (Negley, Bayard, Penn, etc)

Now if only they would redo center. But that seems to be concrete, not asphalt. And the edges of the big concrete squares start wearing away. And those seams are right where bikes go- between the traffic and the parked cars.

The friendship one seems VERY narrow, moreso than before. Liberty Ave, you can actually see the lines again!

Friendship Ave is so narrow, the lane line is nearly on top of the bike logo. I wish they’d just gotten rid of it, but maybe after the lines are completely gone in another six months, they’ll get the point that that roadway is just too damn narrow.

Bike lane compliance (not driving half way in the bike lane) on liberty seems so much better already. We really needed this. Glad we got it. Seems nice and reflective-ish too for better night / rain visibility, as well as most of the new bikeway paint.