I just wanted to ask if there are regular areas around the city (shady spots, wet areas, etc.) that during freezing/wintry weather, become particularly hazardous to cycle on. I’m guessing especially with the grades and cobblestones, this town has some nasty little spots; icy patches on the river trails and so on. I’ve ridden around town a couple of times with icy slush on the ground but was mostly in town.

Lower switchback ramp on the south side of the hot metal bridge. Hip bruises had by many. Fort Pitt bridge pedestrian path too. Sun barely hits these areas.

Pretty much any north south road on a hill and expansion joints on the bridges (which are also at their wheel eatingest width in the winter with all the sections contracted from the cold) the ones on the three sisters bridges (6th, 7th, 9th) are particularly nasty and gaping.

Pretty much any north south road on a hill and expansion joints on the bridges (which are also at their wheel eatingest width in the winter with all the sections contracted from the cold) the ones on the three sisters bridges (6th, 7th, 9th) are particularly nasty and gaping.

Also keep in mind that they don’t plow so if it gets cold enough the slush sitting on everything turns into ice.

I’ll second cburch. Plus, anyplace where snow has melted and refrozen, expect a skin of ice.

Anyone remember the Feb 2010 shovel party on the HMB? Links to some pics in this old thread.

Thanks for the info, especially on the Hot Metal Bridge. I can also tell you the sidewalk on the south end of the Eight bridge stays icy, too. That’s one high bridge!

Sycamore has a glaze of wetness on most days, even if the weather has been dry. If the temps are below 35 or so, that wetness gets a bit slippy (as the locals say)

Possible light freezing rain area-wide today. Anything shady is going to be the last to melt off as the day progresses, assuming it stays warm enough to do any melting at all.

This National Weather Svc explanation came out Monday morning around 9:30.

As I type this, it’s already past 1:30, and it’s still almost sunny north of town, but I suspect that 15 miles south is a different story.

Pretty dark in Squirrel Hill at 1630. Raining, but not heavily.

Especially as it starts to get dark (hah) be extra careful in turns and corners, where (a) you and everyone else will want to go wide for control, but your wide and their wide may conflict; and (b) others may not be able to see you coming, even with strong lights.

– ruts and divots, like on Butler, may collect oil and other drippings which can make things slick and/or alter how snow and ice melt

– watch for piles of undissolved salt. Sometimes can act like gravel, sometimes like a particularly sharp speed bump. Sometimes can be _actually_ sharp.

Look also for guides to driving in winter, which every media outlet seems to run this time of year. Many of the same tips will apply…

val, what is the “eight bridge”?

The news guy said that if the storm may still change course and depending upon that, we may get more rain than snow. Glad I have the gear to ride in it.

CBurch, the Eight bridge (I don’t ever recall the street name) is the one that’s marked as Route 8 on the map, crossing from Shaler/Etna -if I’m not mistaken- over to the Highland area. The locks and dam are immediately on the downstream side. I’ve been trying to learn some new terrain, riding from Ben Avon through that way, and back up through the Strip, or over into Oakland area…

Ah. That’s why I was confused. The bridge that carries route 8 is the 62nd st/R D Fleming bridge downstream from the highland park bridge. FYI the neighborhood and the park are both highland park and there is about a mile of really beautiful new singletrack in there that you can access right around the corner from the bridge.

I’m in the habit of sitting around poring over Google Maps, looking at new stuff to check out; sometimes it takes me a few times to learn the right names of places. Thanks for the word on that single track, is it okay to ride at night, there? Is it smooth enough to ride a cross bike on it? And, can you use it as a connector to any other good routes?

It’s super smooth and flowy. Perfect for a cross bike. The park never closes so as long as you’ve got lights you’re good and it connects to the upper park by the lake/pool and also over to the cycling track on Washington blvd.

It seems I keep finding new places to ride, around Allegheny County. I recently put a mtb rear derailleur on my cross bike and have been having a fair amount of success, tackling some trail sections around town. What I seem to be missing is how to cross that bridge South, and get on Washington Blvd. I have seen the sign but it doesn’t look there’s a way to loop around on a bicycle, that’s not fairly dangerous. Maybe I’m misreading the intersection… I’ll check it out on Maps, again, too… Thanks again.

Nope. It’s a compete clusterfuck to get to Washington Blvd.

I think I’ll try crossing the bridge on the left-hand sidewalk, and see if that doesn’t get me over where I need to be. Are the single track or other trails well marked, or do I need tribal knowledge, to find them?

Sidewalk isn’t much better because you then have to deal with the hpb outbound entrance ramp AND traffic merging from the exit ramp. The single track is pretty simple once you’re on it because there isn’t much in the park yet, but the trailheads are not marked at all. Ill talk to the park steward and get the map file from him and put it online for anyone who wants to check it out.

Anyone with disk brakes care to try the zip-tie trick? This heavy snow would be a good application of it.

i have the brakes, but no where near wnough zip ties.

hmm, gonna have to get me some of those on the way home.

Rode home no zip ties, no sidewalk, and took the lane, all I did was drank a can of HTFU

HFTU goes in pills only! :F

I got some as a gift from a loved one

who seems to think I’m in need of it. 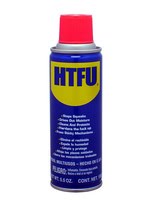 @byogman, Oogle it. I had to, too. We’ve probably all needed some at one point or another…

I always add HTFU to all of my meals. It makes everything more flavorful.

Got the meaning, just messing around.

All the letters here are awesomely ambiguous, you can have a lot of fun with this acronym.

Hot tea from Uruguay. NEXT!!!

I did the ziptie “chains” today. it does work, but something of note is that you really need to have the correct ties for your wheel diameter. I have a 1.9 front and a 1.75 rear, 8″ zip ties got the job done, but it would have worked better with 9″. (TWSS!!!)

So as of Friday at 6:30am, Neville going down toward panther hollow had ice/snow until a block or so before the tracks. The little uphill to the junction hollow trail is covered in snow and ice. These are both passable, but nervous people may want to walk. The parking lot is the best place to cut over to continue down toward saline street. The bottom of that trail isn’t plowed near the gate.

The parking lot still isn’t plowed at the jail trail trailhead on the Greenfield side. Take the far part of the trail if you are traveling that way. There are icy spots on the trail until the approach to the hot metal ped bridge, which appears to be snow covered still. The bates street overpass is ice with some snow. There is again another large area of ice and snow under the Birmingham bridge. The trail is clear with small patches of ice until the jail. I advise getting off of the trail near the road leading away from the parking garage toward first ave if you are headed downtown. The trail beyond the jail to grant looks to be untouched, but I saw tire marks.

The Point and fort Duquesne ped bridge are in excellent condition. There is just some slush on the higher up switchback.

It took me 15 minutes longer to get to work today than normal.

Has anyone ridden through Riverview Park, since the storm?