And yes, I would love to ride on a beach.

I biked Friday with Yale (temps about 40F, some wind) and the trail conditions we observed:

Eliza Furnace Trail is good (no snow), but many whitish salt stains on the trail that can look like ice at times. A little slush near the jail.
The sidewalks around the Point are good on Mon side, but some mud and snow on Allegheny side.
Continuing up the Allegheny from the Point, the trail was good to the 8th St Bridge ramp, but the ramp had snow.
On Northside, upstream of the 9th St bridge, where the gravel begins, the trail was snowy. From 9th St bridge past the stadiums to almost the West End Bridge was clear. Both the snow and the goose droppings had been plowed aside.
The Fort Duquesne Bridge bike/ped path was fine.
I didn’t try the Fort Pitt Bridge; I suspect it was icy.
Smithfield St Bridge was fine.
Southside Trail was pretty good (a few spots of snow) all the way upstream to the Hot Metal Bridge, but upstream of the Steelers Practice Field it got snowy/icy.
HMB itself was fine.

The Allegheny River is iced over all the way across in a number of places, but the Mon has more open water. The ducks, seagulls, and geese are having a fun time walking on the ice.

All of this will be melting further this weekend, of course.

The Mon is active int a sense that quite few barges have been moved during last week.

The Sandcastle/Costco end of the Steel Valley Trail is snow/slush/ice but passable if you have the right tires and disposition (saw some tracks).

The Homestead Greys’ sidewalk was surprisingly clear and even dry on the bridge itself. Ice and slush (but mostly navigable) on sidewalk at the Greenfield side.

I would expect much or all of this will clear up in the next day or so.

Stef has fenders on her pugsley. It’s not just for commuting a when the trails are crappy. It’s also super fun for riding in the woods year round and is her rigid MTB option.

I’ve taken out my 2.35″ shod bike twice in the deep stuff, it’s frustrating.

“The Sandcastle/Costco end of the Steel Valley Trail is snow/slush/ice but passable if you have the right tires and disposition (saw some tracks).”

I walked from Keystone to SS yesterday on that section of the trail and another guy was walking in the opposite direction. It sucked. It was too slushy for my slicks to grip and too hard to easily ride over and my brakes were covered in icy slush.

Yeah, this is what the Baldwin Borough Trail looked like, a bit downstream of the Glenwood Bridge, this afternoon. It was drizzling, 35F, with somewhat icy slush on most of the trail – trail conditions are still poor there. 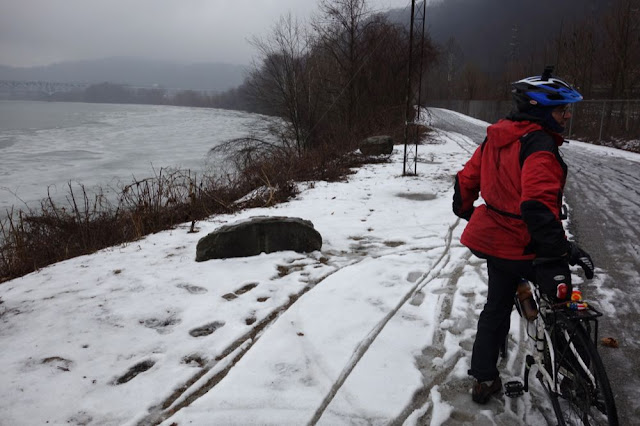 Fatbikes are expensive. Tires cost as much as car tires. There is no way to cost justify them. Unless you place monetary value on FUN!
In any given weather, terrain,road, trail, whatever, my Fatbike is the most fun experience of all my bikes.
Once you get used to adjusting tire pressure to suit conditions, the traction you can achieve is unbelievable. That said, they will take a bit more effort on hard surfaces. Offroad and snow is where they really shine, it is what I imagine driving a monster truck would feel like. No trail? No problem. Fatbike just rolls. I have ridden in 5-6 inches of snow, and it is definitely slow going. Some people claim float, but my experience has been more about traction(maybe I am too fat and slow to float). Normal Pittsburgh snow and slush are no problem at all. They come in all price ranges, from the $200 WalGoose to $5K carbon fiber race rigs, and you can get fenders, both clip-on and full coverage. I suggest one for everyone.

If you lived in the Apostle Islands (see pualheckberst’s pics) at fat bike would be necessary if you wanted to bike more than 6 months of the year.

This morning, riding in Monroeville, the snow was pretty bad. I was amused to ride past cars that were abandoned on side roads, while going faster than motorists on main roads.

I know! I was disappointed to see that this morning. Still there were a couple of other crazies riding it this morning as I was. I am planning on returning to the East End via Center Ave to Craig to Forbes this evening.

EFT/Jail Trail pretty clear, some very slick spots/rutted ice at the usual expected places that you can see due to the dusting of snow, so take care, don’t know if that will be the case this afternoon. If you don’t already, ignore the connector to the ramp from Bates to Second and just take Second to the cutout next to the ramp.

I didn’t ride, yesterday, but kudos to those of you I saw slogging through. I won’t do freezing rain.

I never realized how little snow Portland gets until I see them tweeting and blogging about riding in the ‘severe’ storm that brought what looks like an inch and half of snow.

Fun. I can’t even begin to guess what the inspiration for the mini-tramp was.

Shut_Up_Legs wrote:Sign me up! Or, since it’s a hot toddy station… BEAM me up, “Totty!” lol

Nice. I’m not sure I could handle my bike in the snow after a shot of whiskey though.

…and it looks like Portland’s actually had 6-8 inches of snow and ice dumped on them, so I retract my ‘adorable’ remark.

Report:
EFT is pretty good from the trail-head parking lot to the 376 overpass near the jail. Looks to have been cleared this morning. No ruts, but plenty of ice. From the 376 overpass to Smithfield St. it’s an absolute wreak. Lots of rutted ice. Completely untreated.

Question:
I’ve noticed that the EFT is left unmaintained between Grant St. and Smithfield St. while the remainder of the trail is usually much better. Are there two different entities responsible for maintaining these different trail sections? Who (other than 311) can we contact to make the situation better?

^ I’ve noticed that too, though whomever is responsible for facilities management at PNC is VERY good, keeping their section clear for trail users and going to the extra effort of using a tractor sweeper to clear a path to all the hanger style bike racks they have around their building so the parked bikes don’t have to sit in the snow. Very nice touch.

JZ you’re absolutely right…my memory must have been skewed by the condition of the trail this morning. I haven’t ridden in many weeks due to two nasty wheel failures disabling both of my bikes. The PNC section is usually clear as you said. The section between Smithfield and Grant is usually the one that’s left untreated.

I was thinking a bit about winter shoes and pedals.

Has anyone ever tried using a soft and flat platform pedal and metal studded soles (or even strapping crampons to the boots) ?

That would alleviate the problem of putting a foot down onto ice sheet when dismounting, stopping, or walking while simultaneously offering excellent grip from sole to pedal.

Where is the trail between Smithfield and Grant? I haven’t been down there in a few months but I ususally ride Boulevard of the Allies near there.

I think what is considered the trail is the river-side sidewalk along Ft Pitt Blvd. Myself, I use 4Ave out and Forbes in, within downtown.

andyc wrote:I was thinking a bit about winter shoes and pedals.

Has anyone ever tried using a soft and flat platform pedal and metal studded soles (or even strapping crampons to the boots) ?

That would alleviate the problem of putting a foot down onto ice sheet when dismounting, stopping, or walking while simultaneously offering excellent grip from sole to pedal.

I like the idea, never tried it. I suppose you could run grip studs on a lug soled boot, and old school rubber pedals…

Someone in Portland has to be running hobnail boots. It just seems inevitable.

@andyc you could use something like these with cheap rubber pedals. They look to be very easy to take on and off & to be able to place them at the ball of your foot too. Hey, check this out,

“The Pennsylvania Department of Environmental Protection has issued an air quality alert for today, covering the counties of Allegheny, Armstrong, Beaver, Butler, Fayette, Washington and Westmoreland. elevated concentrations of fine particles in the atmosphere will be hazardous for young children, the elderly and people with such respiratory problems as asthma, emphysema and bronchitis. The DEP recommends those people limit outdoor activities.”

I hadn’t realized previously that there could be air quality alerts during the winter season.

I had a tougher time than usual keeping up a good pace this morning. I wonder if the air quality had something to do with it….that’s a bit disturbing.

Has anybody else found that slush getting caught between fenders and the tire actually makes it harder to pedal?

Ahlir wrote:All this salt and street dreck is starting to bug me. What do you do? My thought is to go (on an above-freezing day) to a self-serve car wash that has hot/warm water and hose the bike down. Anybody do this? Is there such a thing as a Take-You-Bike-to-a-Car-Wash Day? (seeing as you could probably run n bikes through in the time allotted for a car)

ericf wrote:My thought is to go (on an above-freezing day) to a self-serve car wash that has hot/warm water and hose the bike down.

BTW you don’t need to wait for an above-freezing day. You can wash your bike at a self-serve place even on a cold day. I did it the other day. But it would be a good idea to bring a bottle of spray lube along, so parts you get wet can be re-lubricated before they freeze up.

Pierce wrote:Has anybody else found that slush getting caught between fenders and the tire actually makes it harder to pedal?

I think that’s the reason I gave up on fenders years ago. That seems like a pretty good idea.
Also the comments section is great.

jonawebb wrote:I think that’s the reason I gave up on fenders years ago.

Yeah, I just went with clip on fenders this winter. Keep the mud off my butt. There is less coverage, but I just wear rain pants every day over my jeans to keep the legs dry.