Seminar and demo for rolling video

As to the damned fool passing you on the WEC->WCarson ramp, yeah, that’s pretty lame. But AFAICT didn’t directly threaten you, and did give you a good bit of space. Using that as an example of grabbing a plate, though, yeah, that’s going to be tough at that speed. Props to you, though, for handling a difficult piece of roadway.

My intent was only to show video quality, or lack thereof, using the mount I printed not to call any vehicular actions into question.  If all of my street riding was as "bad" as that I'd feel no need for a camera.  My lack of happiness with the footage led me to repurpose the mount as a light mount until I can come up with a way to shoot more stable video.  I've read body mounts are more stable but I haven't explored that method yet.
sped
Many thanks for Stu for taking the time to hold this seminar and Bear Dog Bicycle for providing the space. Figure 1: Stu showing the chest rig for the front-facing camera 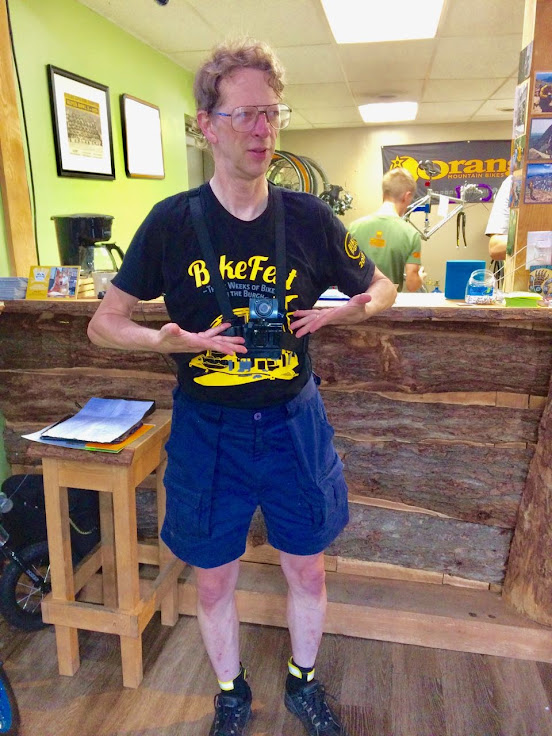 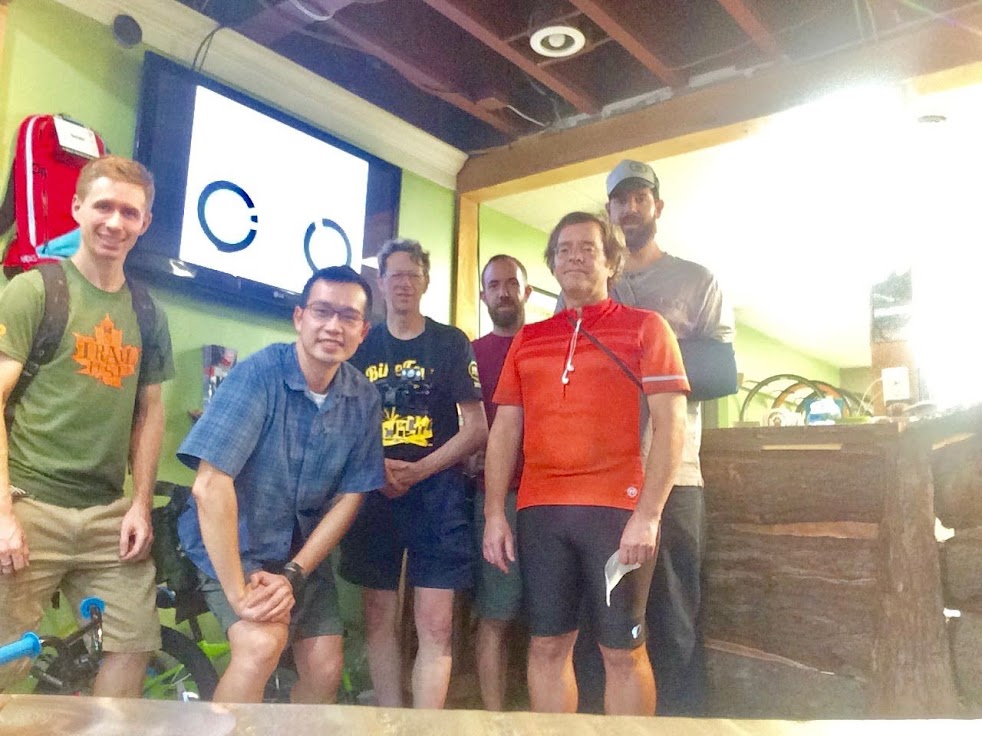 ninjaturtle0304
I will post that one-minute video of the rear camera, showing the dog, sometime today. Paul or Gordon, feel free to post any other pics you might have, especially my MacGyvered together rear camera mount. My main point in all of this is that persistence matters more than money in getting this done, though having the money makes it go easier. And again, thanks to Bear Dog Cycles for hosting the event!
stuinmccandless
A minute or so of video from the rear camera, featuring the bear dog from Bear Dog Bicycles.
stuinmccandless
Stu Strickland's Fly6 camera & light, on rear of his bike (click for uncropped) https://flic.kr/p/XCUtSK
paulheckbert
Three pieces of junk: A sawed off broomstick, a piece of 12-gauge wire, and a thin cord used as a tether.
stuinmccandless
We talked about two main factors of capturing license plate numbers successfully with a video camera: 1) stability of the camera mount or where it is mounted, 2) ambient light. An effective bicycle video camera setup should maintain the same point of aim when going over majority of the road bumps. Stu used to mount his camera on the handlebar with a GoPro handlebar mount, but he noticed a great amount of vibration being transmitted to his videos. The way that Stu tackles this problem is to place his camera on his chest via a harness. However, as you can see below, the footage can be greatly affected by the rider's breathing: https://www.youtube.com/watch?v=Z0V3mkBxZm0 Fortunately, this can be solved with a gimbal device, such as the Yeiyu Tech WG2. As you can see, with the gimbal device, the footage is a lot more stable even on single track: 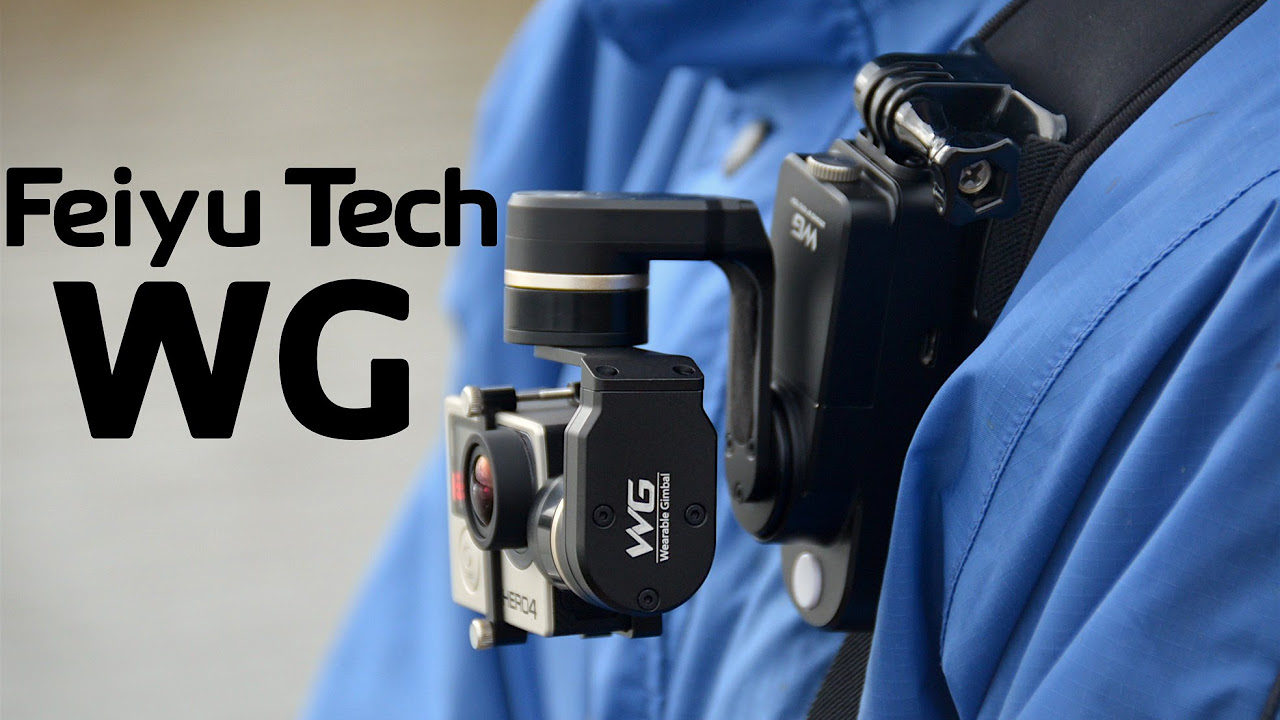 https://www.youtube.com/watch?v=q9w-h26zPtI Even so, my handlebar-mounted Mobius Action Cam seems to work relatively well. This may be because of its compact size and light weight, which make it wobble less from road bumps. https://www.youtube.com/watch?v=Y71S5Pm4leE   As mentioned above, ambient light plays a pivotal role in the video quality. But I am not aware of a product that can help improve video quality in low light conditions. The only method I could think of is to mount a very powerful headlight. https://www.youtube.com/watch?v=AUi2CL8MXko https://www.youtube.com/watch?v=kcBndJutL80&feature=youtu.be
ninjaturtle0304
This is excellent, gathering our collective wisdom and experience to make it possible for others to do likewise. One thing I wanted to do was put together a handout summarizing the high points of the discussion. I think we can accomplish something similar on this thread. The next time we decide to conduct such a seminar, we can take a quick look here for a refresher. To that end, here is a quick rundown of the equip,ent I obtained, and roughly what it costs. 1) Front camera. I paid a bit over $100 for my low-end camera over five years ago. $100 will get you quite a bit more today than in 2012. You can spend a whole lot more, but as my little box has proven, you don't need top-shelf equipment to get in the game. 2) Rear camera. This is where the action is. This shows intent, the moments leading up to an encounter. PA might not have front license plates, but there is enough identifying info on the front of any car to make it easily identifiable. 3) Some method of processing video, i.e., a laptop computer. Assumed that if you don't already have one, get one. Not an iPad, not a phone. Real hardware that you can edit big computer files with. 4) A big storage disk. Mine is 5 TB. The average laptop has 250-500GB, which seems like a lot, but when you dump multiples of 20 GB for a few days' work, that goes away fast. 5) Editing software. The Win7 Movie Maker was pretty good. The Win10 equivalent is horrible. Both are free. I don't know what else is out there, but I'm either too cheap or too broke to buy anything better. 6) An external battery. I use this to recharge my rear camera, which because of its mounting technique, cannot be taken off the bike. I would get those items in that order. That's roughly $500 total, but you don't have to get it all at once.
stuinmccandless
Gordon: wouldn't the video stabilization option built into youtube's uploading system allow you to remove the rolling shutter effects and also remove a lot of the camera shake in the Bumpy South Millvale video (at the expense of some field of view)?
paulheckbert
YouTube helps; the Darlene Harris video is stabilized, as you can see from the timestamp jumping around. Longer period regular movements like breathing are more difficult to compensate for. In any event, while it's useful to know such equipment exists, it's far less important than having documentation at all. In short, evidence, not art.
stuinmccandless
This bloke recommends chest mount if shooting real time and clamping to top tube if shooting time lapse. His video shows several experiments. https://www.youtube.com/watch?v=F_kWOahNRnI
paulheckbert

I came up with this meme after seeing this article titled: "Improving traffic safety with a crowdsourced traffic violation reporting app" (https://phys.org/print411121312.htm).The Mobile Roadwatch app mentioned in the article is described in details in this journal article as well: http://ic.kaist.ac.kr/wikipages/files/chi17_roadwatch.pdf I believe this anonymous, crowdsourced, and dashcam-based system will enhance traffic safety and reduce road rage incidences. If an involved person, even as a bystander, try to dish out punishment, it will often escalate to personal feud/road rage, and any good intentions will fall on deaf ears at this point. I don't even encourage verbal interactions with the offenders. It is best to leave punishment to the third party - police.
ninjaturtle0304
Image not appearing.
stuinmccandless
Very strange - I used Google Photo to store my pictures. I could see it on my browser, and I'm pretty sure I had turned the privacy button off. If the one below doesn't work, I'll try the link from my Facebook album instead.   Google Photo. 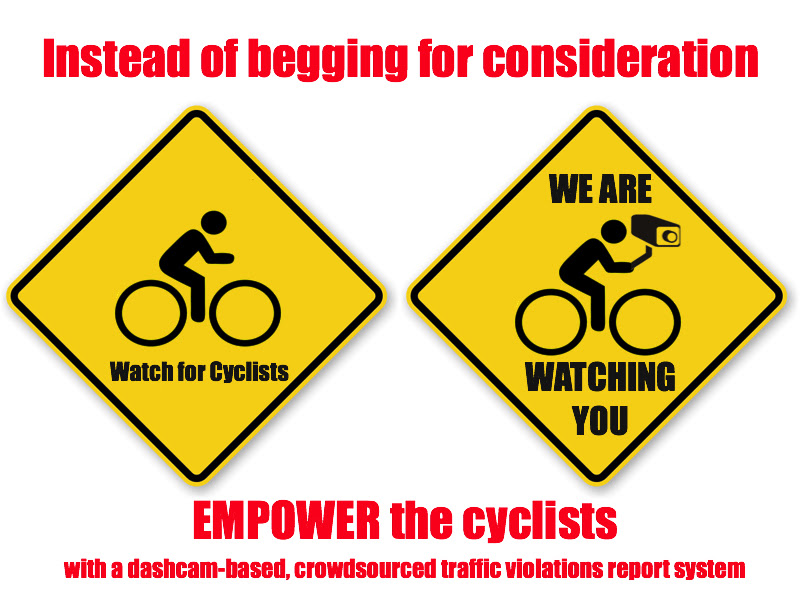 ninjaturtle0304
Excellent! Posted to my Fb. Thank you!
stuinmccandless
I stopped in Target today to get a broom so I can sweep shrapnel away from my path of travel. While I was there, I looked in the eletronice department and saw a GoPro branded Chest harness. The man at the register said that it most likely does not have a standard tripod screw to mount the camera. What kind of harness would I need? He recommended Best Buy, but that is out of reach.
zzwergel
The GoPro chest harness I own does have a standard camera mount.
stuinmccandless
@Stu, Did you get it at Target? If not, where did you get it?
zzwergel
REI, South Side. About $30 + tax.
stuinmccandless
A friend saw this T-shirt at Commonwealth Press:

which inspired me to design this T-shirt:

The current laws do not allow use of videos to prosecute dangerous motorists except in a few cases, though.
ninjaturtle0304
Laws can be changed. I'd like to see a bounty system set up such that we camera-equipped cyclists could pocket a crisp $10 bill each time we record a motorist giving us trouble.
stuinmccandless
Somewhat relevant to this thread. There's a combination light + camera on the market.
ahlir
I own a Fly6. So does@rustyred (Colleen). Looks like they've come down a couple bucks, too. Mine was $172 with tax and shipping. They do a nice job, but you may need to get inventive with mounting techniques. The under-seat method won't do if you have stuff on the rear rack, or if a coat or other clothing obscures the rear view.
stuinmccandless
^ I attached a four inch piece of metal tubing to the hole where you would normally attach a reflector on the back of Rusty's rear bike rack. She then mounts the camera onto the tubing.  It's not elegant, but it works well and camera-shake doesn't seem to be an issue. I'll ask her to post a picture later.
marko82 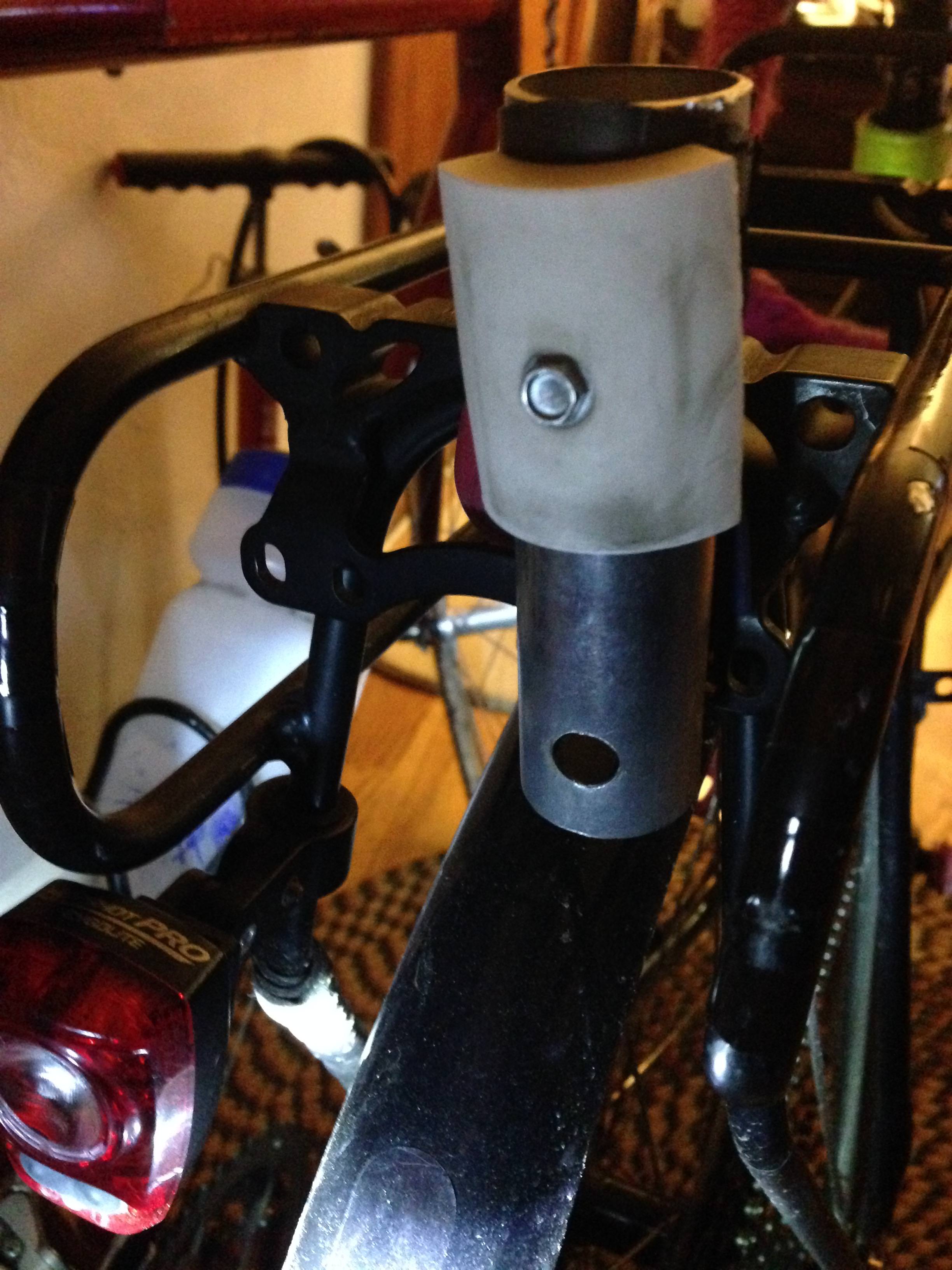 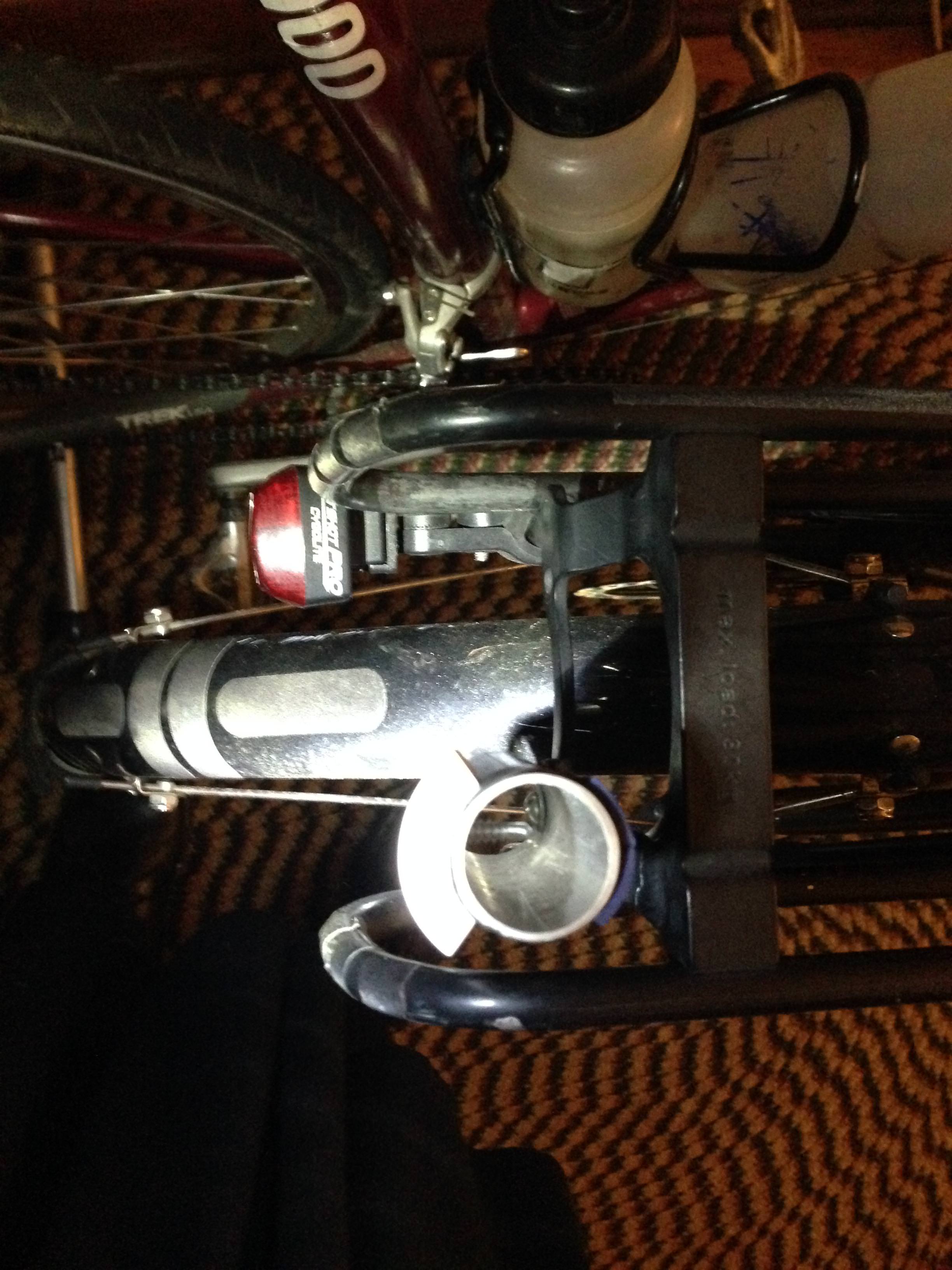 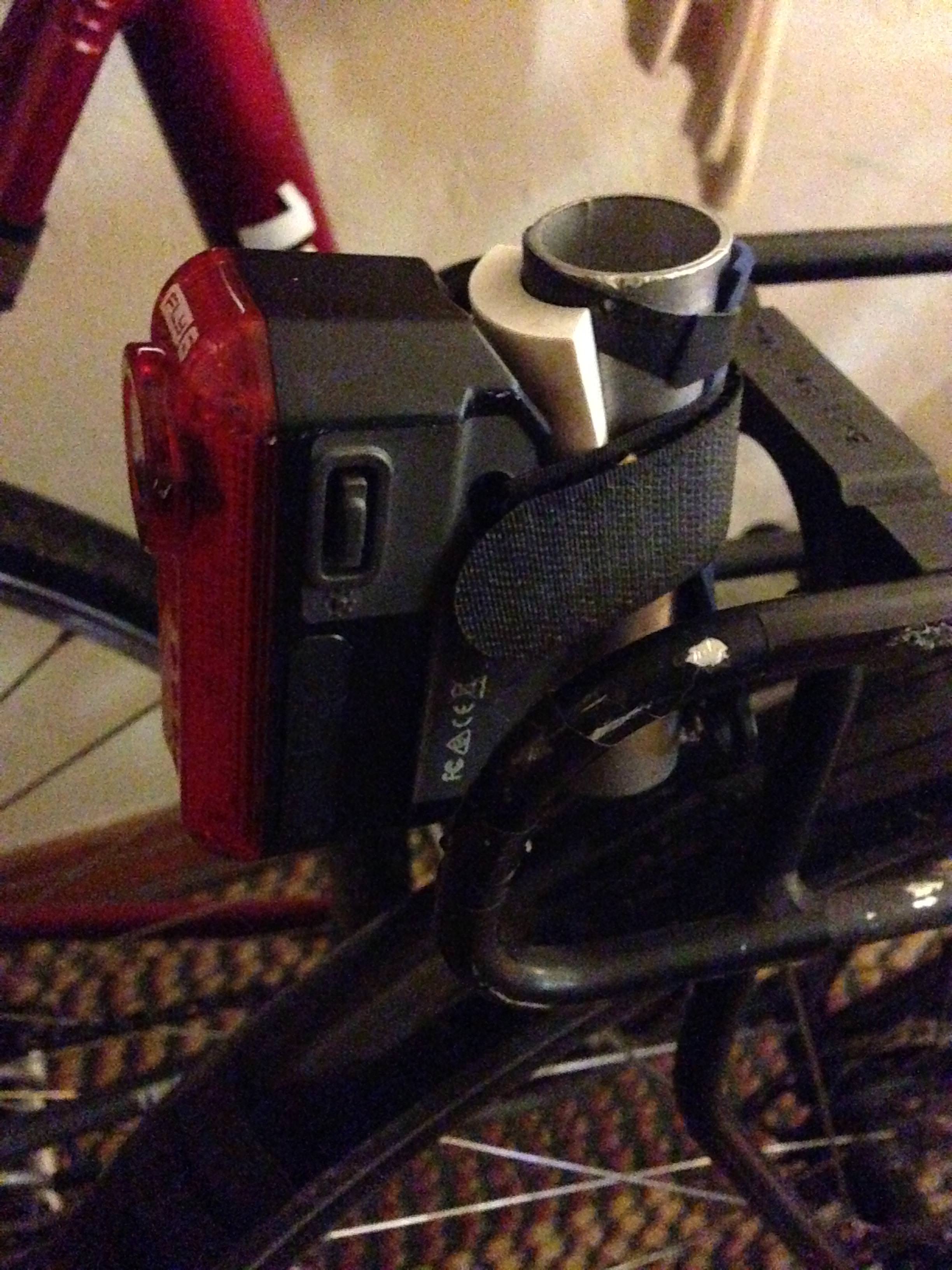 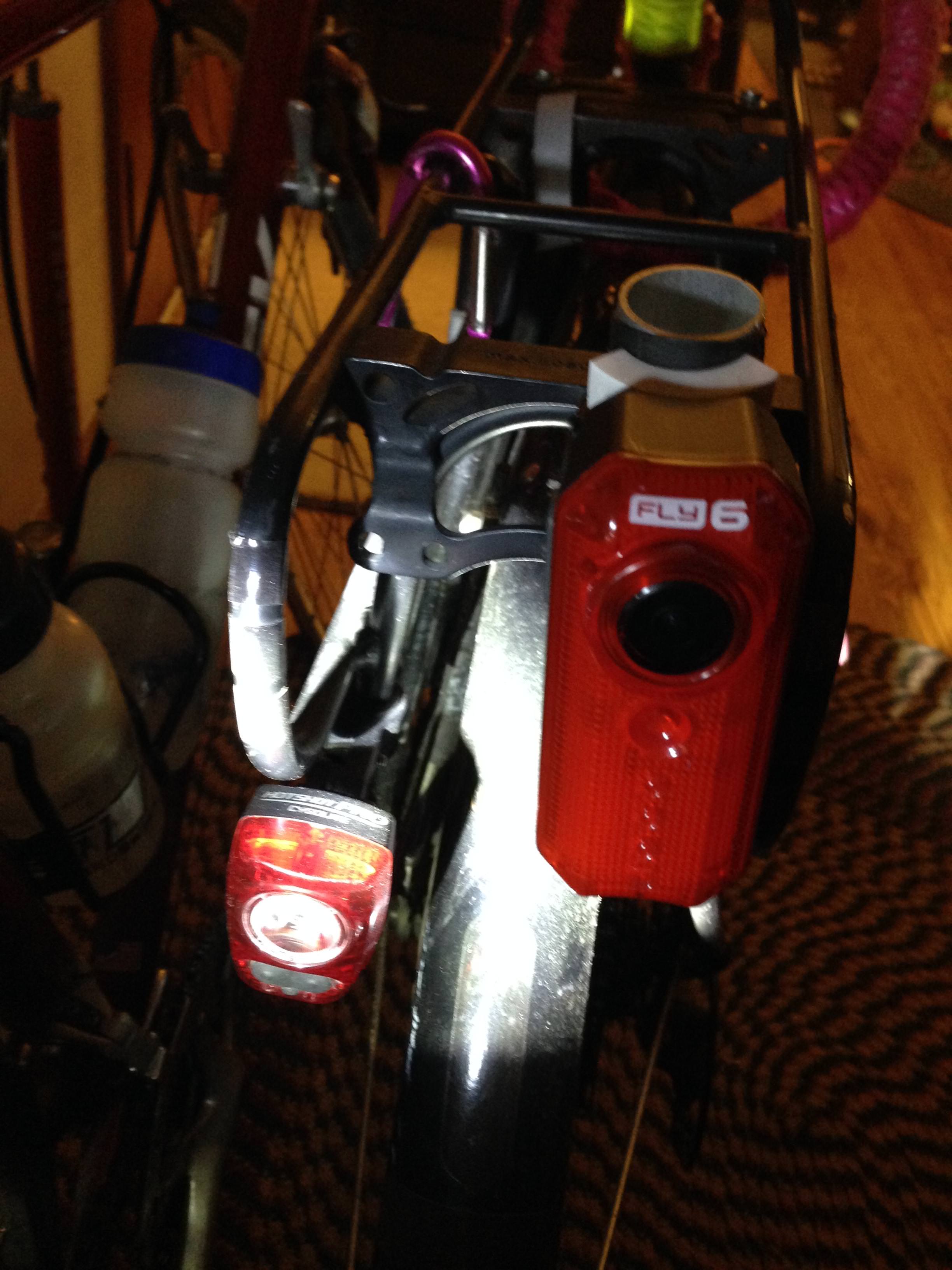 rustyred
Thank you for the useful pics. Somehow it's reminiscent of Steampunk... (in a good way)
ahlir
I am going to download all videos I made using a GoPRO camera and process them to remove the fisheye distortion. Once done, I will re-upload the videos.
zzwergel
Regarding cyclist visibility and recording video to document dangerous drivers, here are a couple of cyclists that take it pretty far. Fraser Cunningham, Cincinnati: https://www.wcpo.com/news/insider/watch-heres-what-it-looks-like-when-a-driver-passes-a-cyclist-too-closely Lewis Dediare, “traffic droid”, London, UK: http://www.telegraph.co.uk/men/active/10851988/Traffic-Droid-the-cyclist-fighting-for-justice-on-our-roads.html
paulheckbert