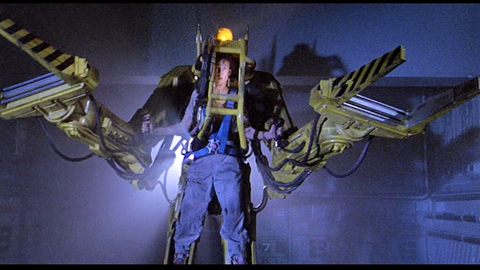 well, if we’re going that route, I’ll let my true nerd out and say that the largest animal with an exoskeleton is Heero Yuy with his Wing Zero exoskeleton

and to get us back on topic, Heero yuy wears spandex and is ultra competitive, but those are probably unrelated. 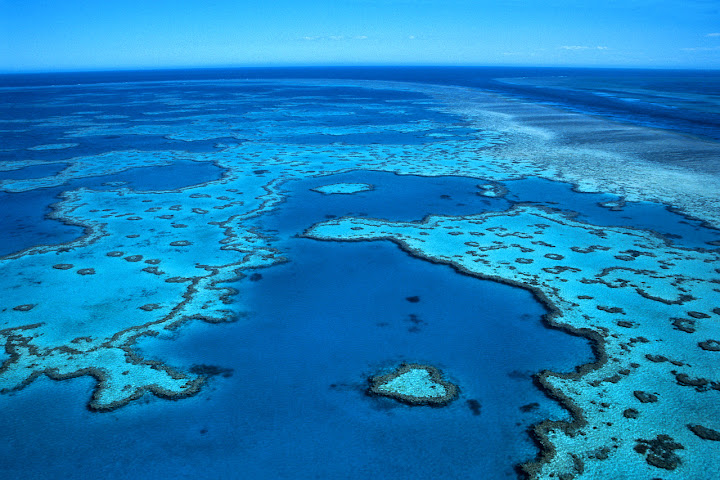 wow. They should totally make up an award, like “Miss Congeniality” but instead “Mr. Badass” and all the participants vote for who gets it and that guy would totally be in the running.

hey, do chicks do the same or have their own Tour? I only ever hear about boys – normal for pro sports, but figured I’d ask.

Yes, they do. There is also the Giro Donne.

thanks for the links!

“…leaving France without a major women’s stage race…” so I guess they used to. Giro Donne seems to be poorly planned exactly opposite the men’s Tour (thus not a chance of being paid attention to in a broader sense)… I’m not sure why I expected a little better of cycling than other sports. Maybe ’cause there’s so many women on this board and biking around town I didn’t really believe the statistics? Not like I’m in to competitions or sports in general. Just… things to mull over I guess.

according to wikipedia, the japanese spider crab is the largest in dimension, while the american lobster may be the heaviest in terms of mass.

the coconut crab, though, is the largest terrestrial arthropod, and is thought to be the upper limit for size of creatures with an exoskeleton.

thank you HV… but why? and OH MY GODZILLA: http://www.tamug.edu/cavebiology/fauna/remipedes/G_robustus.html

the basic consensus is that with an open circulatory system and no actual lungs (just pores for air transfer) our atmosphere is not oxygen rich enough to support anything larger. that’s why if you go back far enough in the fossil record you will find giant exoskeletal creatures, the O2 content of the atmosphere was much higher then.

You go, cburch, science guy! Also, I would dislike having to shed my exoskeleton in order to grow.

On an only so remotely related note, the USA Womens soccer team has made it to the quarterfinals of the Womens World Cup (wisely scheduled during a year not of the Mens world cup), they play France Wednesday to determine the finalists. I will be breaking from Tour coverage to watch this. USA Womens soccer frking rocks.

hmm… lungs and surface area. very good. must be work-arounds, I’ll think on it a spell. yee gads science is distractingly fun.

Women’s soccer was one of the things I was thinking about earlier, edmonds, that and basketball, and that lady hockey goalie that was (is?) playing in the NFL. They are hard core, and awesome.

The Galápagos tortoise may be the heaviest extant land animal with an exoskeleton, at 880 lbs. It may have the longest body too, with a carapace of up to 5 feet long, versus the Coconut crab’s 16 inches. (By total length, the Coconut crab might beat the tortoise’s 5.9 feet with its 3.3 foot legs and 16 inch body, but I haven’t found good total length numbers for the crab.)

The heaviest sea creature with an exoskeleton may be the loggerhead sea turtle, which can weigh up to 1200 lbs (versus the lobster’s 48 lbs).

the tortoise doesn’t really have an exoskeleton, though. it has an endoskeleton and a shell.

in fact, there never really were giant exoskeletal creatures. not in the megafauna sense. the largest arthropod ever was a sea creature, and the largest terrestrial arthropods were probably not much bigger than the coconut crab.

while i imagine cburch is right about the lungs vs. spiracles issue, it’s not all that difficult to imagine an exoskeletal creature with lungs, or some other more efficient (than spiracles) way of absorbing and processing oxygen.

hmm… so perhaps there could exist an environment that would encourage exoskeletons of size, even though they’re less efficient.

yinz guys are smart. I should stop derailing good honest biking discussions, but y’all are too interesting.

I recall being at the museum in Chicago and they had a life-sized reproduction of an ancient millipede that was 8 feet long. Carnegie museum has some scale models of sea scorpions that in real life were nearly as large. I think they may have a fossil sea scorpion that is pretty big. Bigger than the coconut crab.

here’s a video about that:

two things: 1) i lied about exoskeleton size increasing with at least the square. it’s not quite that much, but it’s more than an endoskeleton. b) sea scorpions and other aquatic arthropods don’t suffer the from the weight of a large exoskeleton as much as terrestrial arthropods, so ought to be larger. just like aquatic animals are larger than terrestrial animals. 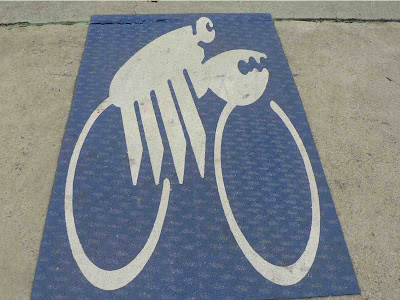 Wow, this is a thread-jack of epic proportions. Color me impressed.

don’t worry, bjanaszek, I think you are still winning that one hands down.

as for the current topic, I have to say I’m pretty upset about the coconut crab. And here I’ve been going around for years saying how I love anything coconut.

Hijacked? Well, I tried to bring it back to biking with that crabby bike lane image.

the tortoise doesn’t really have an exoskeleton, though. it has an endoskeleton and a shell.

Some animals, such as the tortoise, have both an endoskeleton and an exoskeleton.

This is from Wikipedia, so you know it must be true….

Or try this from the Encyclopedia Britannica:

The development of the exoskeleton is carried to the highest degree in Chelonians, when large osseous plates form, in the Land Tortoises and Terrapins, a complete and continuous bony case for the body, invested externally by a rich corneous epidermis, and becoming internally anchylosed with the endoskeleton itself.

So there. Don’t go dissing the tortoise.

Tortoises (torti?) love bicycles, they just don’t know how to get on.

oh Tabby… the coconut crab looks really cool to me. Just picture one singing that song “you put the lime in the coconut and drink it all up..” and you’ll probably find it more appealing. That or the manamanah doo doo do-do-do song. They both increase the appeal of any unpleasant looking creature. Heck those songs just make me happy.

bj, you know us. Once we get a topic in our claws, we don’t let go. Don’t be crabby about it just ’cause you’re bipedal(cycle?). (I’d creepily walk sideways away right now if I could do so online). 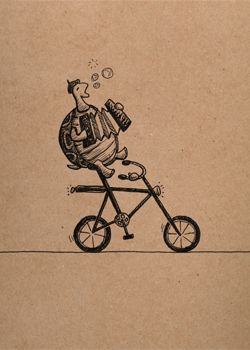 Despite no helmet, he seems well protected, but I admit the pedals are a tad too low for him.

@steven – i suppose there’s no real point in arguing semantics, so i won’t disagree with you. however, for the purpose of this discussion, i assumed we were talking about things that had no endoskeleton, and relied on their exoskeleton for all their structural support. for this reason, i also left mollusks out of the discussion (though i don’t think they get as large as what we’ve discussed). in fact, i’ve pretty much considered only arthropods—that seemed to be what we were talking about.

also, since i can’t help myself, from that same wikipedia article: “A true exoskeleton, like that found in in arthropods must be shed (moulted) when they are outgrown.” it even has a citation!

also also: while these aren’t the largest arthropods, the giant isopods are perhaps the scariest: 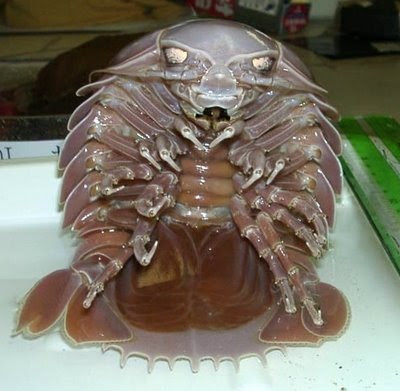 it kind of looks like a giant tick, and it’s come to suck everything good out of your life. Like a small dementor with an impenetrable shell.

exoskeletons creep me out.

i assumed we were talking about things that had no endoskeleton

Topic drift perhaps. Ejwme started with wondering about humans with an exoskeleton instead of skin; I’m not sure if her hypothetical armored people would retain their endoskeletons.

also, since i can’t help myself, from that same wikipedia article: “A true exoskeleton, like that found in in arthropods must be shed (moulted) when they are outgrown.” it even has a citation!

Re giant isopods: Arthropods have it all over the tortoises in the nightmare department.

HV, That pic nearly made me cry. But on second look, it reminds me of an alien.

I thought the fresh prince and the fly killed all those things in independence day?

No the fly was just watching them poop.

Wow, this thread is both completely disgusting *and* giving me a late night craving for some softshell crab.

So is the consensus that a coral reef is not really an exoskeleton?

I used to like me a bowl of them critters the Lisboeta call “perceves” — boiled, with melted butter. Tasty like steamahs but just the necks not the bellies. But that’s probably just the buttah talking.

So, just to briefly get back to the point, the man who went through the barbed wire, didn’t just ride and finish yesterday, he finished the stage by taking the King of the Mountains jersey. With 33 stitches in his ass. But hey, in cycling, stories like that are not uncommon.

That’s a feat on par with riding to work everyday through Snowmageddon, or commuting 20 miles each way through hostile automobile traffic. So yes, I will take a little macho badass (dudes and ladies alike) with my practicality.

To semi stay on point. I want this shirt.