Only ridden on them three times the last week of April: once up to the Uniontown Summit, one CTC and once to OTB, 440 miles.

I would feel like such scum returning these to REI with an excuse such as “wore down too fast and they’re only a week old”. I don’t plan on riding on the miserable Gap until next April at this point and spent way too much money getting gear and necessities for CTC.

Picked these up at the yard sale today.

i have a pair of the exact same 700x28c Vittoria Randonneur Cross tires. they treated me well while they lasted, but they were a bitch to get on the rim and they seem to wear *ridiculously* fast. maybe i over- or under-inflated them and did this to myself. maybe im too much of a fatass and that shortened their lifetime. in less than a year, i wore TWO rear tires down to the warning strip. i think i had <800 miles on each.

im switching to a new style soon (probably tonight)… im thinking that i will go with the ribmos.

these lasted about 3000-4000 miles, or 11 months, on my single speed. they were the same ones you’re selling. that is the kevlar showing. also, i flattened those babies right down in the middle. (ignore my dirty rims)

i agree that the beading was tight around the rim. i only got pinch flats once or twice.. which was totally my fault.

i got ribmos and for whatever reason, it was easier to get the front tire on than the rear.

are you sure those are ‘randonneur cross’? our tread looks different. for what its worth, i think mine is not kevlar as it has a non-folding bead. heres the wear patch on mine: 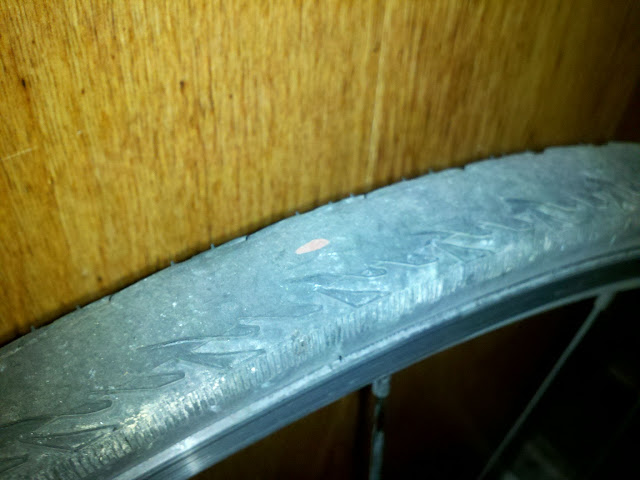 Yours tires look like http://www.vittoria.com/product/city-trekking/ Randonneur Cross Pro (but this is 2012 catalog)

The belt in the middle is Kevlar. The bead is wire.

So, the downside of the Vittoria’s is wear?

They have the Vittoria Randonneur Cross Tires on Nashbar for dirt cheap right now (I think clearance and they are no longer making this specific tire).

With today’s additional 20% off, it’s under $50 after shipping for two 700c X 37c 120TPI kevlar tires with reflective sidewalls… seems like a damned good deal?