guy on a tall bike on highland ave. this evening

I was on the 500 tonight going thru East Liberty (~6:10p) when I spotted a guy on the tallest bike I’ve seen since those old old-fashioned bicycles with the big front wheels. He was just cruising down Highland Ave. like nothing was up at all.

Anyone else see this guy tonight? Or maybe you are that guy…..

I spotted him on Penn with a big smile on his face yesterday afternoon. How the hell does he deal with stop lights?

He runs them. If the traffic is too heavy, by making a right turn and then doing a u-turn, followed by another right turn. There’s no obvious way to mount that thing without stopping next to a raised platform. I was a passenger in a car following him one evening, and he was pretty wobbly. It worried me.

I have a friend who just got had a frame welded together, but I don’t think he’s managed to build it yet.

I couldn’t tell if it was fixed or not. I had thought it was, until he didn’t trackstand at the red light.

It’s a clever kludge, I’ll give him that much.

I need reading comprehension lessons. I skimmed the top post, and thought we were talking about an actual ordinary. I’m actually curious about whether ordinaries handle like modern fixed gears and whether you can trackstand them. I don’t know the answer.

Regarding tall bikes, now that I’m paying attention, I don’t know much about those either. Oops.

Anyone have a photo? I’m having a hard time picturing this. I, too, thought we were talking about an ordinary.

I’ve been on a giraffe unicycle a few times. Trackstanding gets geometrically more difficult the farther off the ground you get.

There were a lot of these guys last time I went down to St. Augustine FL. They would hold onto lamp posts, trees, etc if they had to stop.

I haven’t seen this specific tall bike, but

should give you a good idea.

If a tall unicycle is a giraffe, this bike is more like a camel.

This looks about right to the one I saw 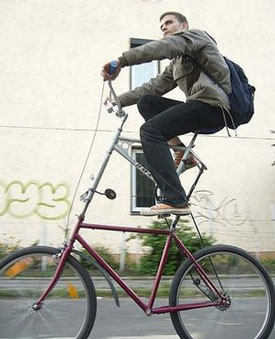 YES! That’s kind of what it looked like, although I think the guy’s bike was yellow….but I was half-asleep at the time, so who knows.

hehe, I love the front fender.

They were all over Chicago last fall….. Fun to watch them in traffic.

I love the front fender.

Kinda pointless, don’t you think? Also, does he not have a rear fender because rooster tails don’t get up that high?

My son, looking at this, noted that the guy has a mirror that appears to be pointed such that he can actually use it.

Noticed it the other day. My daughter says she sees it often. Check out B.I.K.E. It’s a documentary about a couple bike clubs and you can watch how they ride tallys.

spotted one parked next to the beehive wens around 7:30… owner no where in sight. have a pic, but no clue how to post it

bikelove: upload it to tinypic.com and use the html embed code. hope that works… THANKS!

I saw him today on Highland! Was a little slow to snap a pic. Not the same dude as Bumper Bike Guy, is it? If not, I wonder if they know one another.

No, he’s not the same as Bumper Bike guy.

Speaking of bumper bike, maybe he’s inspired some bumper pedestrians. I ran into this image on a Flickr photostream of G20 protesters:

saw a couple tall bikes on penn yesterday. one was walking her dog.

haha i might know who owns the one by the beehive but i am not 100% sure.

There is a younger couple who I see in the southside often that both have these bikes. I think the one in the pic is his because she has 2 matching mens and womans pugeot road bikes welded together. They let the bouncer at lava lounge ride one around the block. That girl gets on that thing very gracefully by standing to the left of the bike, putting her right foot on the bottom tube of the lower bike, pushing off, putting her left foot on the the upper bikes lower tube, and swinging over the seat. It takes her 2 seconds though I did not see the dismount.