Rode Bayard/Bigelow today, in both directions. Ahh. Much nicer.

Left turns remain a challenge, at Craig and at Bigelow/O’Hare (and at Neville for that matter). Boxes should help a lot.

I’m just here to second @jonawebb’s comment from a couple of weeks ago that the Forbes—and Fifth—corridors between the universities should be a priority (IMO). And in an ideal world, bike improvements along either corridor would extend into downtown or at least Uptown, because I dream of having a route between Uptown and Oakland that would be all of the following: technically legal, relatively safe, AND relatively efficient.

Disclaimer: I am very biased as someone who lives near the Birmingham Bridge, works at CMU, and commutes up Forbes almost every day.

I’m happy to see Oakland bike infrastructure getting some love!

also looking forward to the bike box planned at Craig, as the only reason I was able to get over to make the left was because everyone next to me was stopping for the car parked in the bike lane just before the signal…

@buffalo buffalo – yeah, looking forward to bike boxes there and at the bigelow/bigelow/ohara/parkman instersection. Until then, I’m a huge fan of the copenhagen left (used to use that at center and neville all the time before the left turn signal install).

On the subject of the green bike boxes:

Given the propensity of this city’s drivers to not stop at the white lines before a crosswalk, I don’t have high hopes for these boxes to be respected by them. I sincerely hope that I’m proven wrong.

I really want the city to put in white “stop here” lines before the stop sign at North Dithridge and bayard, often times cars don’t know where it’s appropriate to stop and pull up too far (in to the new bike lane). Even better would be a green lane :)

Nearly got sideswiped yesterday here. Guy was blasting music so loud he couldn’t even hear me yell at him, but that may have been for the best though as I was a bit salty.

Protected bike lane on Schenley Drive is now live. Some signage to be removed and bollards to be installed, but the strange dead end cyclists used to face now is extended to bike lanes.

Thanks for the heads up about the bikeway extension. I’ll scope this out on my lunch break.

“Given the propensity of this city’s drivers to not stop at the white lines before a crosswalk, I don’t have high hopes for these boxes to be respected by them.”

Additionally, aren’t Pittsburgh’s *already-angry-about-these-damn-bikes* drivers going to find it “annoying and unfair” that bikes get to go the head of the line in traffic?

The only bike box I regularly encounter is at the PA28 turn onto the 40th St Bridge. Nice idea in principle, but bad place in execution. The first 200 yards of the bridge are uphill, so when southbound traffic is down to one lane, you get to have every car and truck on the planet (it seems) breathing down your neck. Even cranking as hard as I can, I barely achieve 15 mph until I crest that rise.

My method: Hang back in the up-from-Millvale bike lane until turning traffic clears, and pretty much ignore the box.

Constable parking in the bike lane on O’Hara near Western Psych. 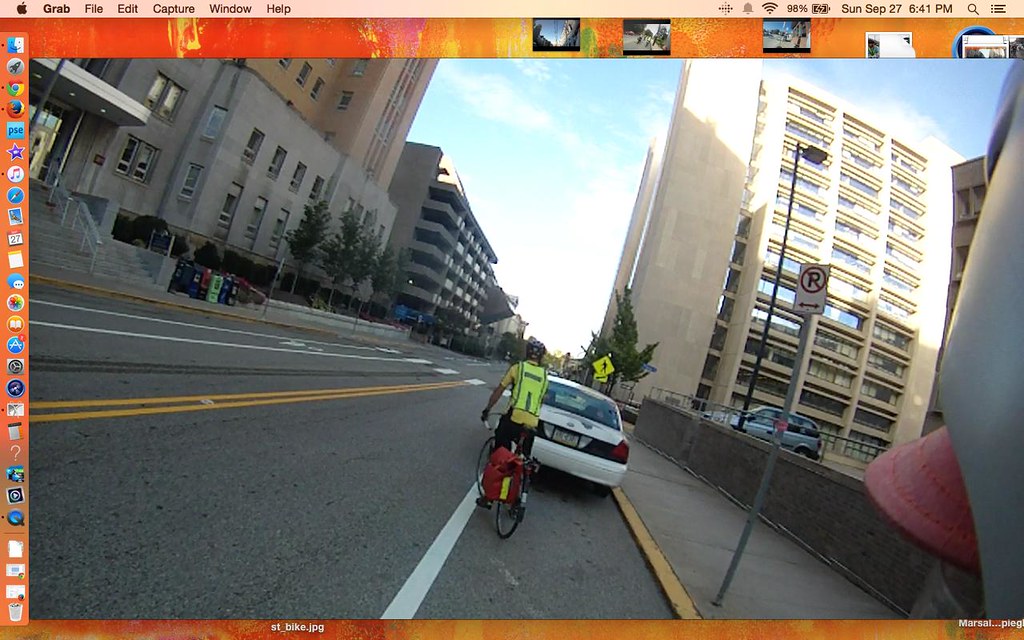 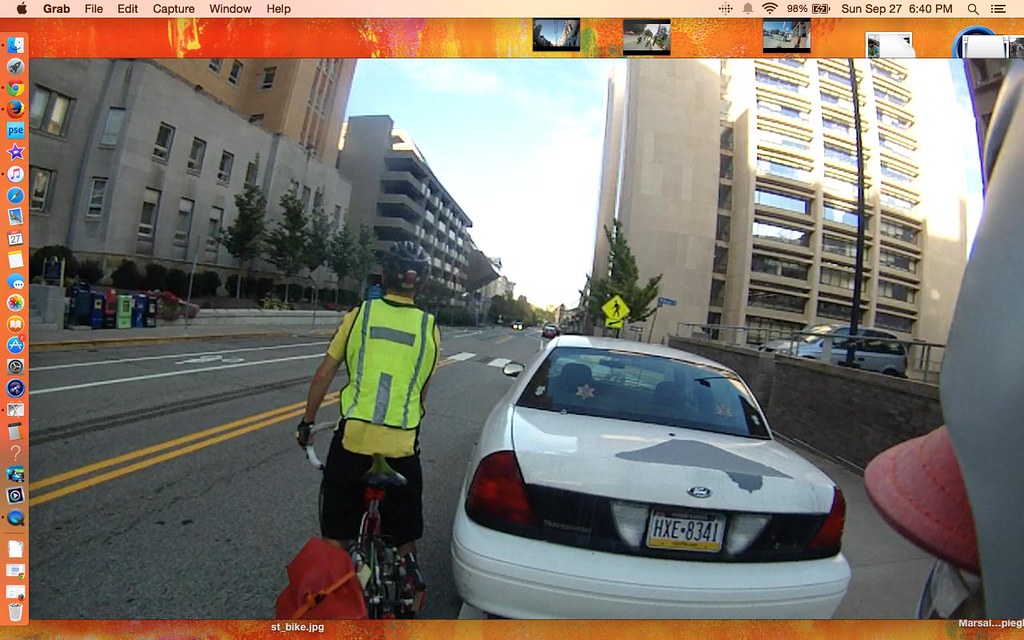 I unfortunately scared the shit out of someone in a crosswalk yesterday. Since it’s much harder to take a left from Bigelow/Bayard st on to Bigelow coming from Shadyside, I’ve been going down S. Bouqet instead.

Yesterday I found myself yelling at a couple folks in the crosswalk “HEADS UP. WOAH WOAH WOAH WOAH!” as I was coming down the hill on S Bouquet Street crossing 5th. I was going at quite a decent speed and had a solid green light, but a few people crossed against the signal and I had to get their attention and do emergency evasive maneuvers because I didn’t expect them to enter the crosswalk well after the light change.

Apparently, not many pedestrians on the south side of 5th are expecting bike traffic coming down the hill going straight on S. Bouquet. So, I’m going to keep my speed more in check here in the future and assume that nobody sees me coming.

Lesson Learned, be safe out there.

I guess bike boxes were not planned at Bigelow/Ohara/Parkman since the left turn lane is set back so far to accommodate right turning buses outbound from Oakland towards Shadyside.

The traffic backs up so it’s pretty much impossible to get from the bike lane to the left turn lane during rush hour. Going to S. Bouquet is easier for me most of the time than doing a Copenhagen left from the end Parkman st.

Though, If I was going to make that left during rush hour, I would either go during the pedestrian signal (which is questionably legal) or do the Copenhagen left from Parkman instead of attempting to use the left turn lane.

Had a funny run-in on Bayard Avenue.

I was taking a photo of a car parked in the bike lane in front of the Ryan Catholic Newman Center when an old couple walked up behind me. I asked if this was their car, because if it was I would’ve asked them to move.

They said no, but then added, “what would be the problem if it was?” I told him that parking in the bike lane is illegal (as stated by the sign literally right above the car.) He shot back, and I kid you not, “well these whole bike lanes are illegal.”

I had a good chuckle over this one.