A Penn State-Altoona student has been charged with stealing the bicycle of another student — twice.

Police say Graham stole the $465 mountain bike on Sept. 14 after it was parked unlocked on campus. The owner spotted the bike the next day and took it back.

Police say the bike was stolen again on Oct. 6 when the owner, again, parked it unlocked on campus.

A friend of the owner’s saw Graham on the bike on Oct. 22, which had been spray-painted another color. Police say Graham eventually acknowledged stealing and repainting the bike, which ruined it.

Graham, who is from Philadelphia, didn’t immediately return a call and emails for comment.

Outside the squirrel hill giant eagle, near the bike rack 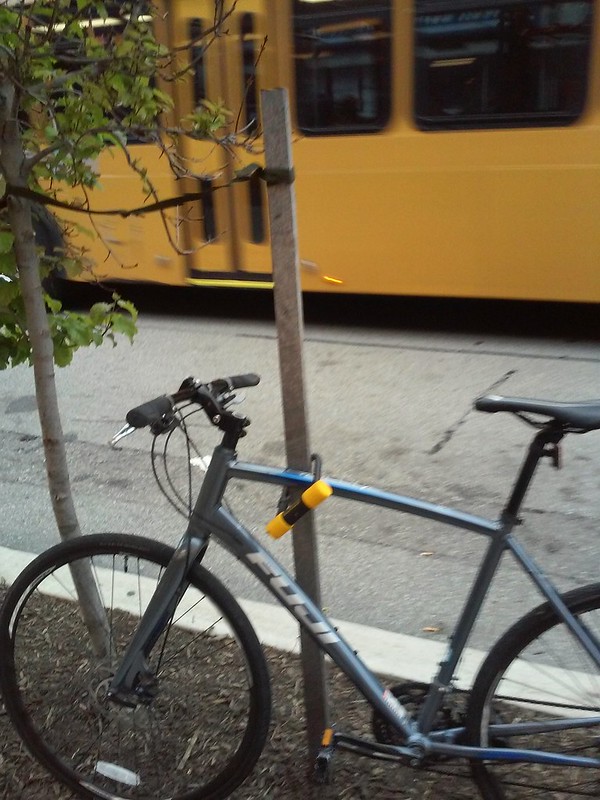 At least they used a u-lock

I think I saw that guy locking up on Friday. I and another cyclist had just vacated the nearby rack, but there was still another empty one maybe 30 feet farther away. At least he did not lock to the tree.

Where to park your bike downtown:

BTW, related, I did an inventory of Squirrel Hill bike racks for the SHUC Bike-ped group. The map is here: https://drive.google.com/open?id=1iUvc0_rYvgkL2TapGYSwXZBKdQ8&usp=sharing

One of the striking things the map shows is how clumped the bike racks are at Forbes & Shady and Beacon & Murray, and how absent they are from the 61C up to Forbes on Murray — missing the liquor store, the post office, Eat ‘n Park, the Manor, Bruegger’s, Pamela’s, and Citizen’s Bank. It would be great if we could get some of the racks moved.

All the businesses in that stretch of Murray are within one short block of a bike rack. Pamela’s is within 40 feet of one. Do we really need to ensure that bike racks are closer than bus stops or parking garages to get cyclists to use them?

(Maybe we do. I was passing through Lawrenceville this week and noticed a bike suspended and locked up in the branches of a very small tree, in front of the PNC at Butler and 41st. A rack was perhaps 100 feet away.)

In any case, I don’t recall seeing any racks on Forward Avenue near Murray, nor Murray between Forward and Morrowfield. Maybe those areas should be higher priorities?

Ask the business owner how they would feel about having on-street parking removed from in front of their business for an answer.
It is reasonable to expect to ride up to a business, park there, and enter that business.
My inventory was just for Murray from Forward to Forbes, and Forbes to Shady. This is the high traffic business district in Squirrel Hill (or, really, from say Hobart or so on). There is no problem with putting racks other places, but we should at least have them there.

Giant Eagle could dedicate one spot for bike parking. There’s enough bike-riding customers and plenty of spaces open in their parking lot.

Also, I asked the beer-store owner if he would consider installing some bike racks if I got him the information. He replied that I can just bring the bike inside. Basically “no” (but still a very nice guy).

Anybody can request the city install a bike rack here: https://docs.google.com/forms/d/170tbA_m0rFtQIgJCHeRGILFxkFUtDv6H5tcJXqaPeM0/viewform
The racks are free of charge.

The Squirrel Hill Giant Eagle already has a bike rack on the edge of the parking lot, right at the entrance to the store. However, I’ve long suggested that people don’t use it; AFAIK, it’s not actually attached to anything.

For contrast, the GE Market District on Centre Ave has a truly impressive number of racks–a handful right by the entrance, a half-dozen or so at the gate to the Cafe’s outdoor seating area, and another dozen near the exit of the parking lot. Other than perhaps the Target in East Liberty, has to be one of the highest concentrations of bike racks on a single business’s property in the city…

In Toronto, some take their locking more seriously than their handlebar attachment. 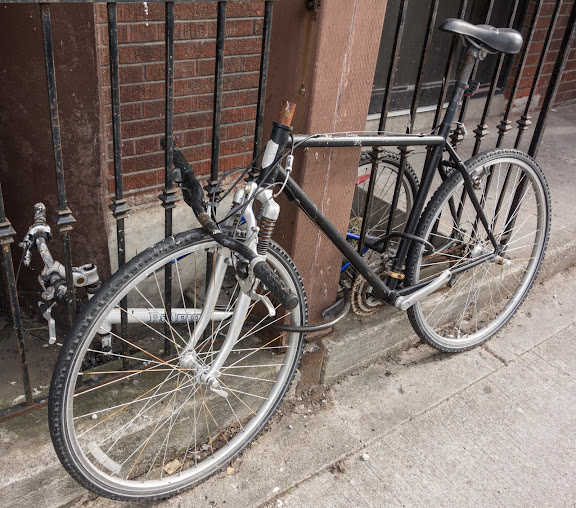 It looks more like they took some parts of the bike, then locked it. The pedals are also missing. From the way the bike is locked I think those would have been hard to remove.

How long has that been there? I’m half tempted to say that bike’s abandoned and people are now scavenging parts.

…especially given the already-half-stripped hulk in the background…

A man approaches a bicycle, handheld electric saw at the ready. He powers it on, starts to drill, and is shot in the face with a noxious spray that makes him vomit uncontrollably. This is the dream of the inventors of SkunkLock.

“Basically we were fed up with thefts,” said Daniel Idzkowski from San Francisco, one of the inventors of SkunkLock. “The real last straw was we had a friend park his very expensive electric bike outside a Whole Foods, and then went to have lunch and chat. We went out and his bike was gone.”

Idzkowski’s friend had used two locks, each $120, whose inability to stop a thief outraged him. “I blurted out, ‘why didn’t it blow his balls off?’”  He eventually landed on a less violent and more legal innovation….

“Easy to locate, safe and well-distributed bike parking is provided throughout the city. In dense locations and places where the sidewalk is already crowded, the city installs bike corrals consisting of multiple bike racks in the space of one on-street parking spot. 5 new bike corrals were installed over the last week at the following locations, try them out!

If you are interested in a corral at your location, read more about the requirements and process here: http://pittsburghpa.gov/dcp/bicycleparking&#8221;

It’s really a question of what tool you have to carry to defeat the lock.

“My son found this on his bike at CCAC. Nice community outreach by Pittsburgh Bureau of Police” 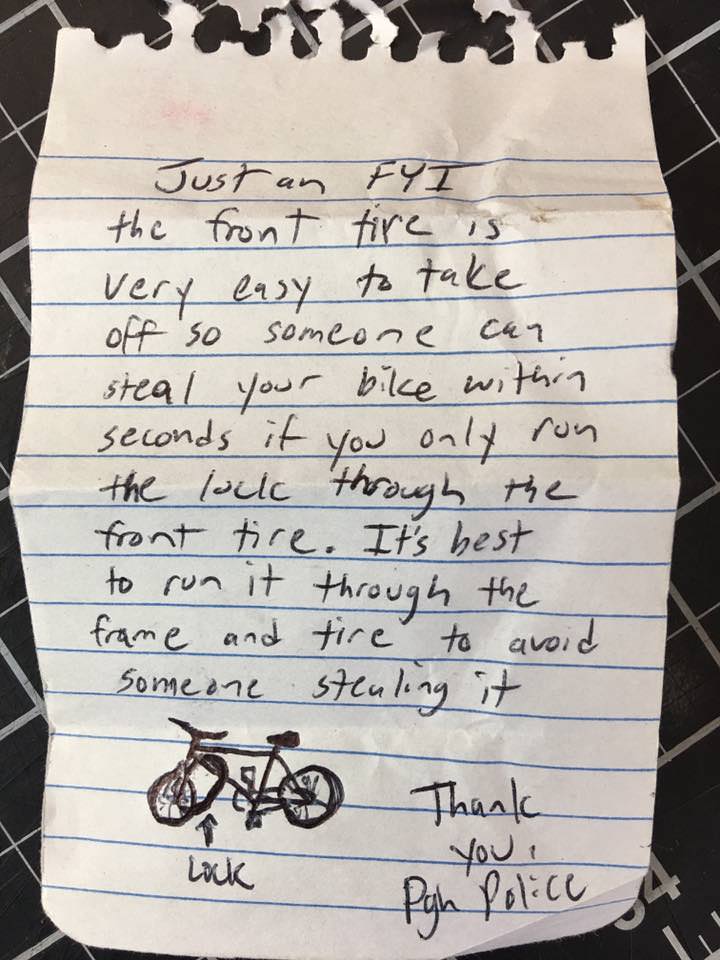