here’s a response from Dan Gilman

work order placed for replacement of all bollards. Also contacted Peoples gas who was doing the work, not PWSA. Also, notified motorcycle division for increased enforcement

@PGHDPW construction division is installing a new pilot configuration for flex posts on the Penn Avenue bike lane from 9th the 10th for @PghDOMI today. Comments or concerns about the new layout? Submit them to @Pgh311 pic.twitter.com/Pqt3tVc290

To protect bike lanes from encroachment of motor vehicles, we could try the Catclaw device, which punctures the tires of heavy vehicles, but perhaps this is going too far.

No, that’s going too far. We already have undeserved bad publicity for having the bike lanes at all. That would ensure that the bad publicity is indeed deserved.

I think the Catclaw spikes would be of use to stop illegal parking on sidewalks like this. 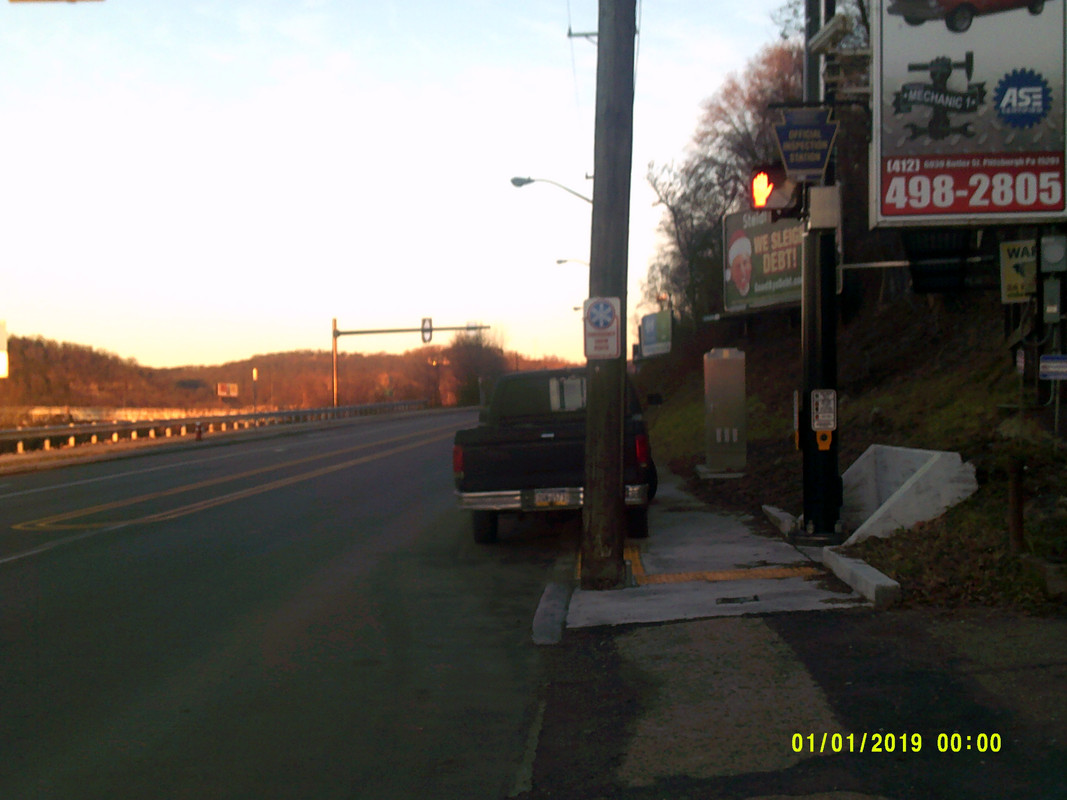 Someone with a wheelchair cannot fit between the truck and the traffic light pole. 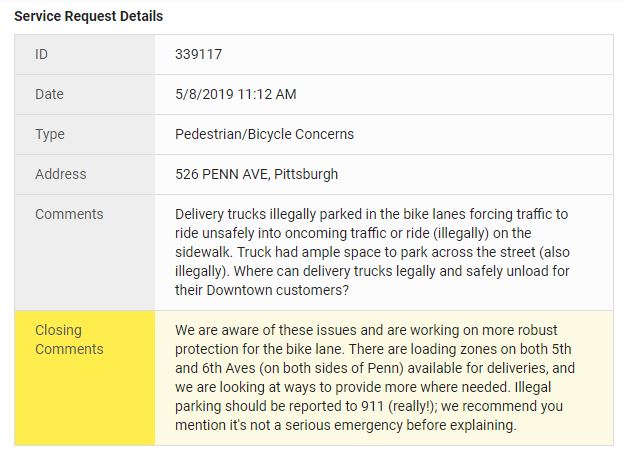 When i went down penn the other day, there were 7 cars parked in the bike lane all along penn. That bike lane has been an utter mess lately.  The whole 700 block, with all the bollards missing is dangerous because of the cars driving in it to get around loading busses. Almost been hit 3 times now. Has this happened to anyone else or do i just have bad luck?

As 311 said to @RustyRed, call 911 every time.  Especially if it creates a dangerous situation for you, and then tell 911 about the danger as well as the parking.  If you have time, send the photos to 311 as well, perhaps mentioning the 911 call.  But it will be the volume of complaints that actually gets action.

To help improve cycling in The Strip, even if you missed their workshops this week, you can comment on DOMI’s Strip District transportation plans at http://pittsburghpa.gov/domi/stripmobility. Click “contact” to get an email address for comments.

I emailed them this:

I bet the strip would survive and even thrive if Penn was closed from 16th to about grandpa Joe’s candy shop and turned into a peds mall. There’d be terrible outcry but it would be awesome when done.

Not sure where to put this comment, but this thread looks acceptable.

Are we about to go another winter without a single municipal finger being lifted to clear snow from even one bike lane or path, even one block long, even once? If Bike-Pgh isn’t pressing to keep them useable year round, IMHO they’re not doing their job. Anti-bike forces would be justifiably upset that no cyclists will use the space taken from motorists six months out of the year.

Again, we can mow the grass in every park and on every golf course all summer. Why is the manpower not reassigned when the snow flies?

I encountered a delivery vehicle parked in the Penn Ave bike lane this morning on the corner of Fifth Ave.  I ended up being harassed by several individuals while attempting to obtain license plate information:

I got a photo of the inspection sticker, but not the license plate.  They ended up driving off with the rear door wide open while I was on the phone with 911.  They got out at the next intersection to close the door.

I ended the 911 call after they drove off, so I opened a 311 service request and included the relevant detail.

911 = I have an immediate problem that needs addressed. Pittsburgh has an integrated system. So non-life-threatening situations go to 911.

311 = there is a longer term issue here that someone should come by sometime to fix.

If you see someone breaking the law, for example parking where they’re not supposed to park, report it to 911. 311 can at best forward the issue to 911. You are slowing things down by talking with them.

I’ve heard it both ways.  Got any sources to cite?

Here’s a source — I 311’ed a truck parked in the Penn Av bike lanes.  I got a helpful, informative response from a Zone 2 Sergeant.  The key sentence from his message is ” My recommendation, when violations are observed, is to call 911 as opposed to using 311, as this will prompt a faster Police response.”

My takeaway is:
1. Call 911 about the immediate problem.  Maybe they have someone nearby who can deal with it, but even if not, they have another complaint recorded.  More complaints means more encouragement for them to pay attention as they patrol.
2. Also file a 311, noting that I called 911 about this incident but the City should know that the problem persists.  I use the MyBurgh app on my cell phone, so it’s easy to include a photo or two with the 311.  This also generates a ticket number to follow up with.

I’m curious what the optimal solution is for the situation depicted in your video miscuser123.

It looks like a box truck had some large items to deliver but nowhere to park. Is there a better location for the truck to park? Perhaps a rear loading dock in an alley? Is there parking further away?

I’m curious about this exact scenario as well as the more abstract dilema at hand. How do buildings with no access to parking take delivery of large items? Or even small items? Perhaps there’s a solution that’s apparent to those with experience living in dense cities. From my memory though, places like NYC rely on illegal and double parking for delivery trucks. Is there a solution?

First, look back up in this thread to 5/8/2019, where the same problem in the 900 block of Penn elicited a 311 response explaining where nearby loading zones actually exist of Fifth and Sixth.  This incident was near Fifth and Penn, so it looks like there may have actually been a legal alternative.  (That 311 response also recommends calling 911)

Building managers systematically plan away their loading docks, thereby externalizing their own delivery problems on the public.    Why does city allows this in new construction?

Some cities manage the curb space systematically, including by time-slicing the usage (NYC does this).  This often involved permitting the lane near the curb to be used for deliveries only during off hours, like 2am to 6am.  This could be done with parking zones — deliveries midnight to 6am, use lane for traffic during rush hour (6am-9am, 4pm-6pm), parking during the day and evening (9am-4pm, 6pm-2am).

The problem isn’t restricted to bike lanes. The south (right-hand) lane of Forbes in Oakland is often referred to as the “loading-dock lane” in discussions about improving traffic in that area.  I think the bike lanes may take a bigger hit, though, because delivery truck drivers have less respect for “don’t block the bike lane” than for “don’t block a motor vehicle lane”

I think some contrition on the part of the guys making the delivery could have mitigated the situation somewhat.   Instead of acting like it is a big joke that a cyclist expects to be able to use a designated bike lane,  they could have apologized, moved a bit faster in their work, perhaps even step out into the vehicle lane to hold up traffic so the cyclist could get around.  What they did was harass the guy and all but encouraged others to do the same.  Courtesy and manners are in short supply today…

There are two westbound lanes on Penn Ave. so if they’re going to take their chances parking illegally, they should do it there where it is less of a danger.  Plus there are alleys and side streets available near most downtown buildings including this one.  A few blocks away in the cultural district, the illegal parking was so common that they put those parking lot curb things along the side of the bike lane to prevent it.  Looks like we need more of those.