Please forgive this slight tangent, but I was playing around with Steven’s spreadsheet (thanks for ALL of your record keeping & mapping!) because I was interested in how many people are playing the game over time. I had the feeling that more people were playing back in the olden days and that only a handful are playing now. So here’s a graph of what I found:

The data’s not perfect since I treated group pick ups as their own player, but it does show a drop off in players over time – but we still have between four and eight players each month.

And here’s the number of Tags over time

That pretty much puts the kibosh on the “this game is going to hell” theme. Things have been pretty consistent for 3 or 4 years. Even a slight upswing in the last year.
BTW, the original Tag-o-Rama game, the motorcycle game in Ohio, is still going strong on one thread. Computers are amazing.

This game is not my thing; I didn’t have the time to play even when my own property was a tag. That said, I have a few tag suggestions for anyone who wants to venture up 18th Street to the hilltop neighborhoods:

1) The upper end of the former Knoxville incline;
2) The new Black Forge coffee shop on Arlington Ave;
3) The piece of artillery in the cemetary across from the old Dairy Queen in Carrick;
4) The new catering place on Warrington, called Sweet Peaches.
5) The italian restaurant on Warrington;
6) Some custom bike racks that Dan B. and I built, which are in front of a shared working space/business incubator on Warrington;
7) Various other cemetaries up in that area;
8) The plaque commemorating where three workers were killed when the old printing press on Allen Street collapsed during a snowstorm in the 1990s. It is now a parking lot for sugggestion #5.
9) The Japanese-style entryway to a home next to the old Knoxville High School.

Maybe this will help get the game into some new areas.

I was afraid this might happen.
This tag is now on the move, fortunately just across the street.

No word on its sentience, but be careful out there.

The Hallmark Mother’s Day may have passed. But on this coming weekend, I conjecture, some mothers look forward to a reward for their years of selfless sacrifice.

Or so I thought.

Maybe this tag is a mother. In search of its spouse, for a meal. Like I said, be careful.

[Just tossing a pellet of clue into the limpid waters of the Koi pond of Tag… watching ripples spread peacefully to the edges. Perhaps one of which is you.]

CMU, corner of Frew & Tech. The sculpture appears to be stuffed with alfalfa sprouts. 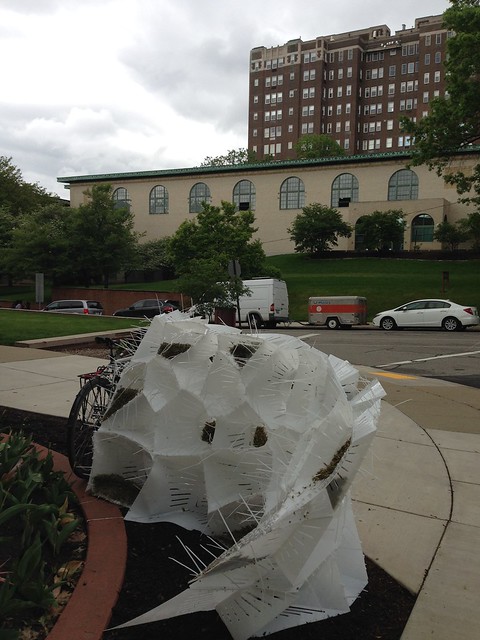 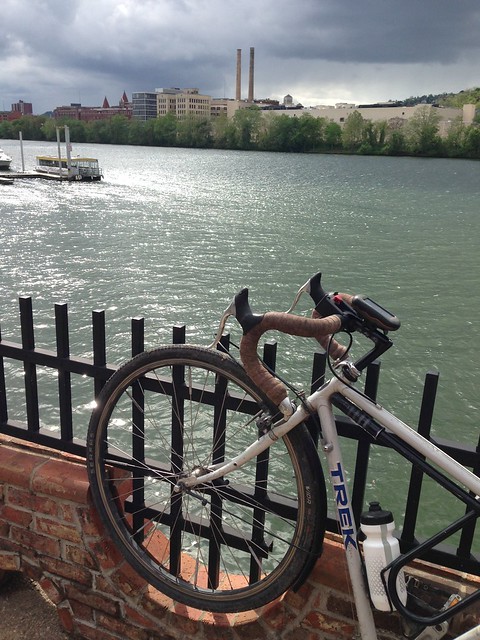 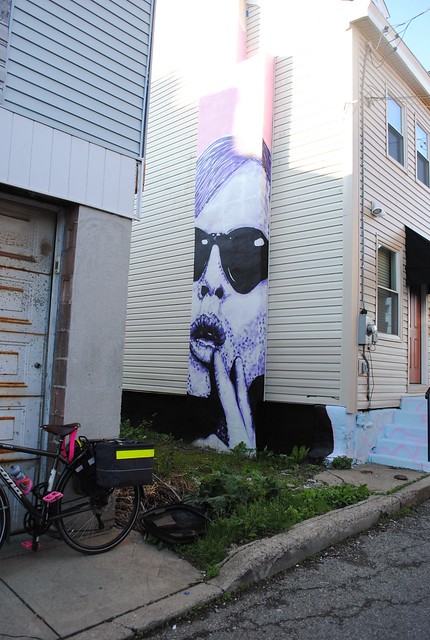 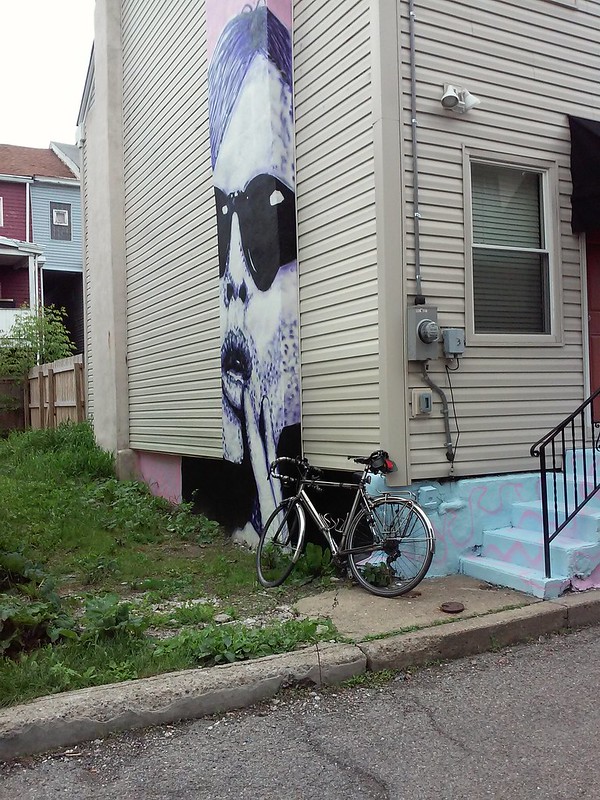 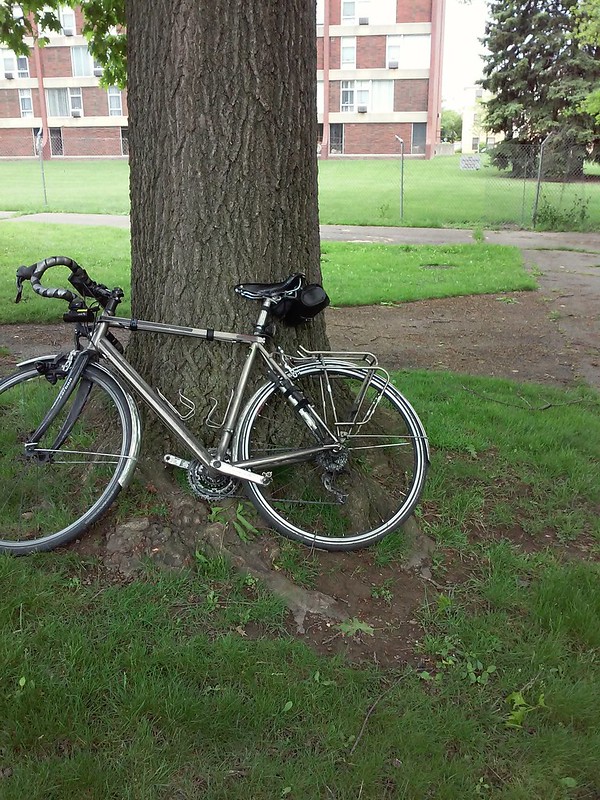 I figured out where this is, but there are a whole lot of people who are closer to it than I am. All yinz who want to pick up a tag, I’ll head out that way Monday late afternoon to get it, if it’s still there. 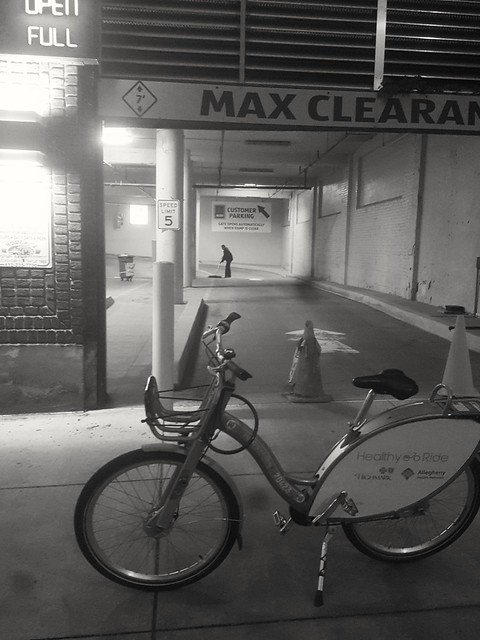 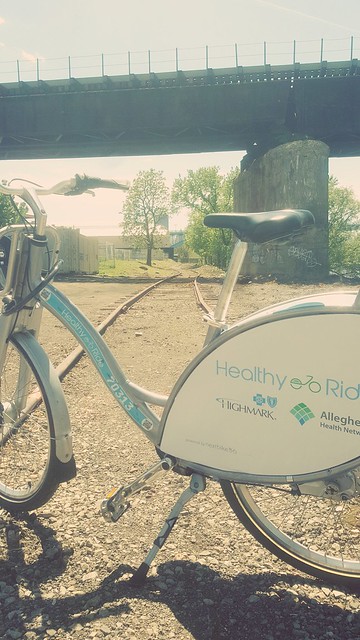 If only this were paved

Hi, I checked in to offer a couple of comments on Marko’s evaluation of game players and tags.

I tried to play early on in the game, but since I live in the north/western quadrant of the “box” most of the tags were too far away for me to even consider getting, given that most players lived or worked in the more heavily tagged eastern portions of the box.

Even after I stopped playing, I would continue to check in, to learn more about this awesome city.

I rarely even stop in any more. Too many tags are too obscure for my limited range of movement/regional familiarity.

I am thrilled that the game continues for the rest of you. It was fun. But, I worry that with the continuing sophistication and/or obscurity of the clues, will new participants be able to get their wheel in the door?

Photo taken with my helmet cam because I left my cell at the office. Because of that, I couldn’t get online to line up the exact pose as the tag drop, but I’m pretty sure this is the same spot. Same bridge in the background, same tracks.

The Hippocratic Oath says physicians should do no harm, but hemlock is poison.

What do others think: is Stu’s picture of the railroad tracks and the bridge a tag pickup? I see bent tracks versus straight tracks, steel bridge support versus concrete abutment, trees versus no trees.

We should let Kieran weigh in.

@ph, apply the rule that you applied picking up the eaglet tag. Just move on…

I’m pretty sure those are the wrong tracks, though the correct tracks are not far away. So it doesn’t look to me like a good pickup.

Well, here’s the problem. If you have a camera but not a cell phone, how are you supposed to tell when you’re in the right spot?

I figured out which bridge it was, as noted by the thin railing or fencing on top of the bridge, and I remembered there was some sort of grade crossing or very high gravel level between the tracks. I tried a spot the other side of the bridge but came back to this one because it showed the crossing and the bridge.

I wasn’t about to bike 22 blocks back downtown to get the cell phone when I had a perfectly operable camera on me. To require being in the exact spot means you need fully operable mobile Internet service, which I didn’t have myself for the first almost four years of the game. Back then, after figuring out a tag, I had to drag my laptop with me along with my old flip phone, hope I remembered to bring the connector cord with me, take a photo as best as I remembered it, then chase off to a library or coffee shop or my office, whichever was closest, get online, upload the picture to the PC, then to Flickr, then putz around with the URL to embed it in a post here. I did that from the start of the game until August 2013. Being in the exact spot was less an issue for 10-foot-high “@” signs or Snoopy doghouses or anchors than for 70-feet-high bridges.

Last night, after figuring out I didn’t have the cell, I snapped the photo with the helmet cam, biked back to my office (where the cell was sitting on my desk where I left it), plugged in the helmet cam, sent a tweet from there, then linked it in a post.

The tag drop was easier, since I had the cell in my hand.

So, really, you’re going to say we have to memorize the exact spot before getting a tag? Define exact.

Note also that the helmet cam has a much wider field of view than does the cell.

Not the same set of tracks but very close. It was indeed on 32nd st. I think in the spirit of the game the Stu’s new tag should be accepted. Im not sure having to bike back to go an extra 100 yards adds much to the game

Kieran’s call, I think, so it’s a good pickup.

But Kieran, your tag was on 33rd, right, not 32nd? From Streetview, it looks like your tag was just northeast of 33rd, on the tracks right next to the river, and looking SSW toward the 31st Street Bridge in the distance. You were roughly behind this truck.

That’s about 700 feet from Stu’s pickup, which is looking NNE toward the same 33rd street railroad trestle, but from the opposite side. No 31st Street Bridge, since he’s pointing the opposite way.

So, really, you’re going to say we have to memorize the exact spot before getting a tag? Define exact.

I’d think being at 32nd instead of 33rd and Railroad instead of the river, and looking in the wrong direction, would usually not be exact enough, but Kieran is clearly nicer than me. :-) 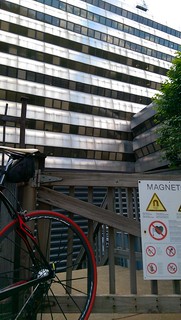 On Hemlock Street. Next to a hospital. (For those who weren’t getting the clue…)

Sadly, all my photos of my new tag came out horribly. This is the best I got. That unidentifiable blob in the foreground is my saddle nose, BION.

Although there are several ways to get from the south pole to the north pole, there’s only one official way. But by thinking a mile and a half outside of the box, I didn’t have to use the airport to find the shortest flight from pole to pole. This image probably admits of two different solutions; show me one with lots of flowers… or both solutions! 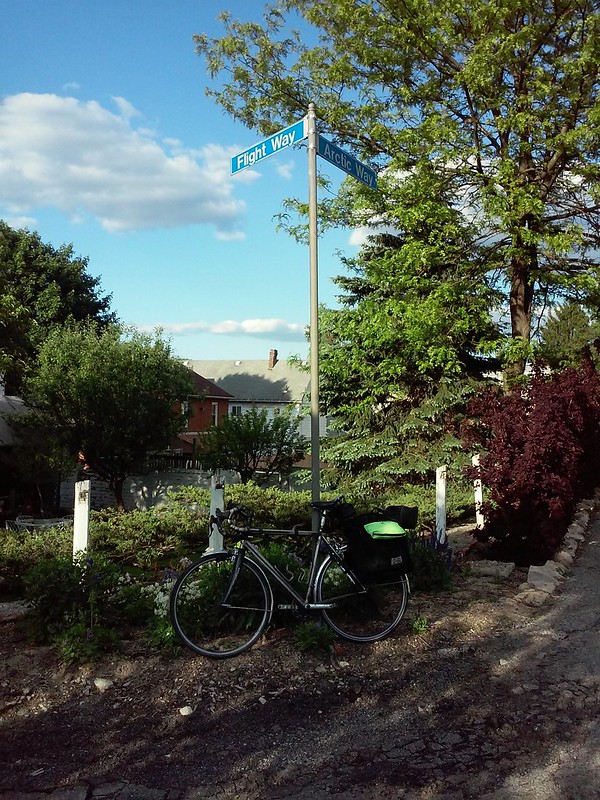 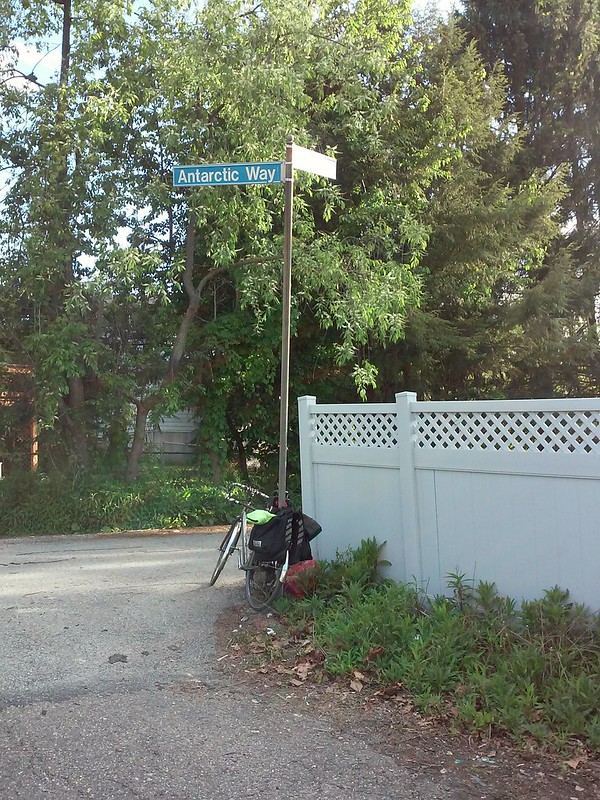 And not far from Official Way!

Dang, that was fast. How is it an Allegheny Hospital tag goes unclaimed for three days, but my tag out in Mifflin is claimed in less than 3 hours?

Despite the clues, I really thot it’d take at least a day or two for someone to decide to hike up there to fetch it. Well-earned!

I got lucky figuring out the clue and my wife was at her book club so I had time to pick it up after work.
It is a real climb out there. I went up Ravine, and Google maps kept trying to make me turn into roads that aren’t there.
New tag
We’re not in Kansas anymore
But we’ve got space for six bikes or more 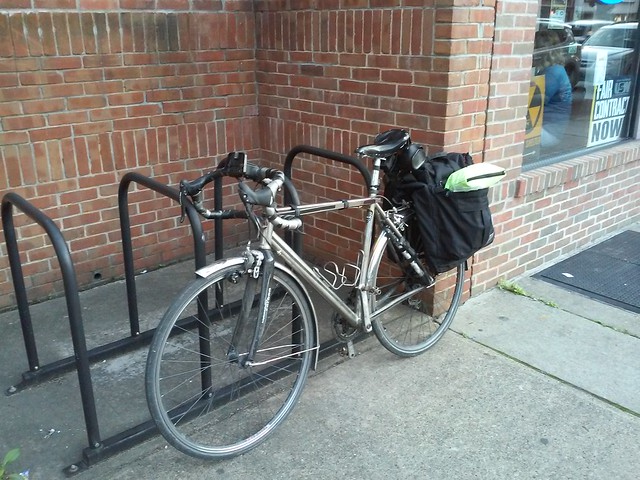 I’d thought last weekend somebody would get out and roam
Is it just the weather that’s keeping everybody Home?

I’ve thought about that fallout shelter symbol. There can’t be that many of those around anymore. But I have no idea where this is.