My my, so many questions.

For our first ride of the year, we’ll hit Oakland, Downtown, Northside and finally end up at Arsenal Park in Lawrenceville for a pizza party.

Friday April 15th is our next ride

Celebrate Earth Day with us as Flock Seed-Bombs Pittsburgh! We are partnering with Apoidea Apiary in Millvalle to seed-bomb local trails with native plants that bees love!

https://ridewithgps.com/routes/12984756
This ride is about 10 miles and takes a hour to an hour and a half to complete. We’re ending the ride at OTB Cafe on the South Side. https://www.facebook.com/otbbicyclecafe/?fref=ts

Our regular monthly ride meets at Dippy at 6pm on the Third Friday, departing at 6:30!

Thanks for getting this up. Some of us that avoid car use don’t sue Facebook either.

We now (again) have a website with a calendar for you non-facebook folk–info on this ride is here: http://www.412flock.org/?p=1202 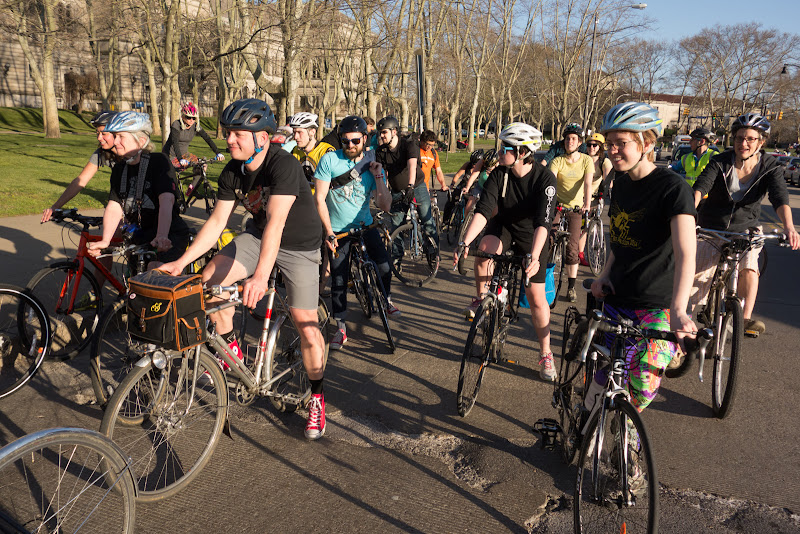 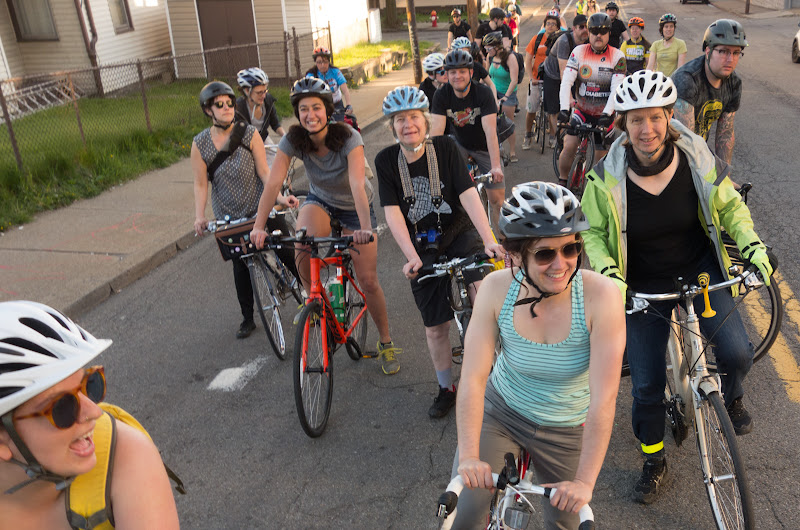 Our 2nd Annual Cinco de Mayo Ride destination is “The Cinco de Mayo Festival in Beechview” (Las Palmas 2nd Location), and we’re partnering with West Liberty Cycles who will serve as our meet-up and starting point for the ride!

This is today at noon.

This month’s ride is the annual Rainbow ride, this Friday, June 17th

412 Flock supports the LGTBQ community in Pittsburgh with our annual Rainbow Ride!

Put on ALL of your colors and bling out your bikes and join us for this fun, boisterous and informational 10-mile ride hitting various landmarks of Pittsburgh LGTBQ history.

412 Flock/Rainbow ride is tonight & the NWS has 0% chance of rain for this evening.

I’ll be there on a HealthyRide!

We had about forty riders last night with beautiful weather and many first-timers.

This was about the most fun flock that I’ve been on.

I had a great time. But, of course, I have suggestions:

The ride is advertised as starting at 6pm and rolling out at 6:30pm.
Yesterday things didn’t move out until just before 7pm. (I asked around and people remember it as after 7pm.) This is not right.
Some of the riders, particularly novices, will not want to be out after dusk. They will give up early and will miss out on the whole experience.

The ride should really be something that works as presented.
And that encourages people to show up for the next one.

Dino time is great for socializing, but I thought that the point of the ride (slow paced, etc) was to provide social opportunities. Let’s not confine all that social stuff at the dino then Ride! But it’s how it comes across.
I like having the idea of having a theme and having someone present it to us. But shouldn’t that happen at 6:15pm?

Anyway, on a more positive note, I set up a google photos album with my pics; I believe you should be able to add to it (though maybe you need to have joined the googlephoto borg; let me know about other options).

On my (usually poorly attended) Critical Mass rides, I advertise meeting at 6, tires on pavement at 6:15. It’s a different vibe, of course, but I do take into account sundown time. If possible, I try to have the ride done before sundown.

Friday July 15th!
We’ll end at East End Brewing’s new Taproom in the Strip District, so make sure you work up a thirst!

This Friday is our regular monthly ride!

Looking forward to this!

Just because I want to see YOU! 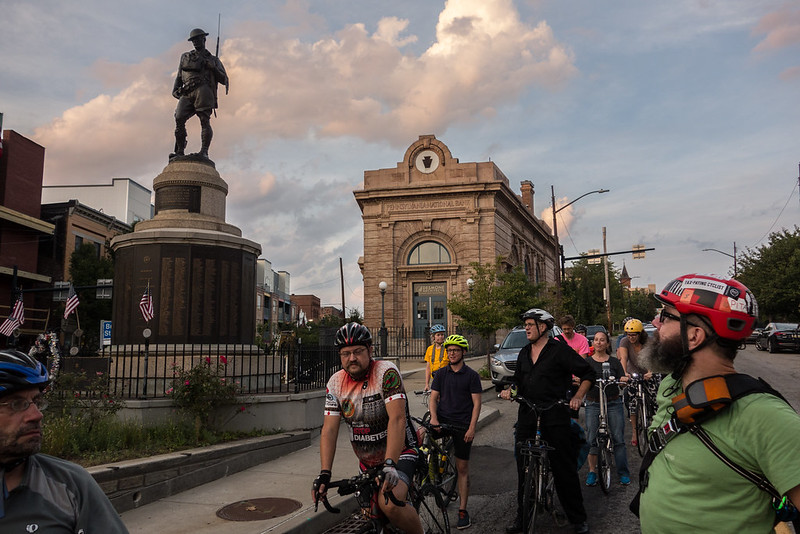 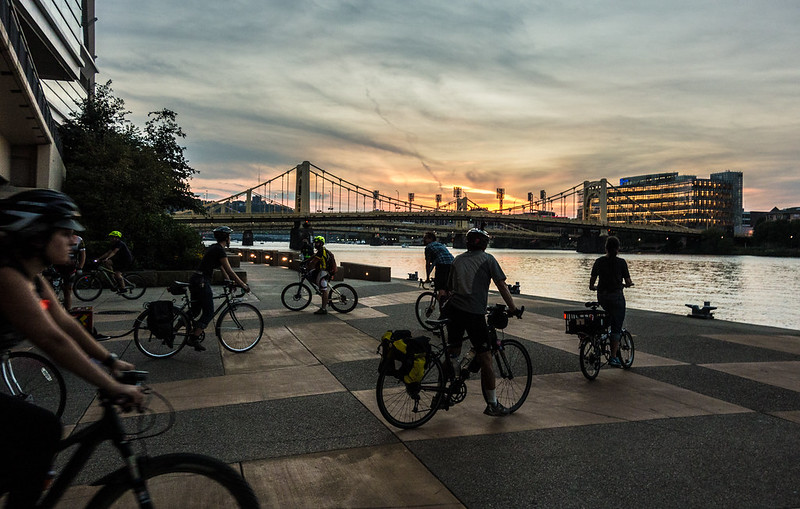 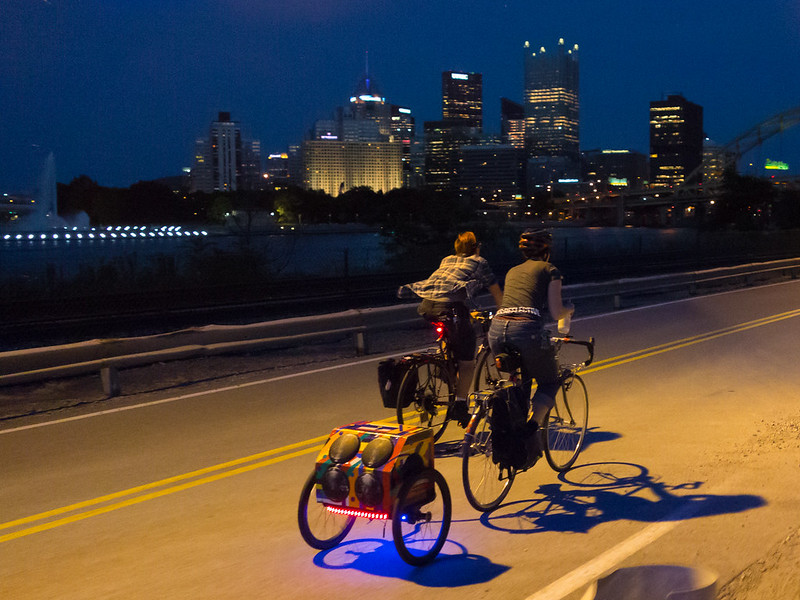 A small change for this month’s ride:

We decided to push our monthly ride back to the 28th so it doesn’t interfere with the Hicks Memorial ride. .We invite you to participate in the memorial ride on the 21st   and then  join us on the 28th for a Halloween themed ride.

Hey, we’ve got a November ride!

This is TONIGHT! Our route will take us into town if you’re interested in Light-Up Night festivities. http://www.downtownpittsburghholidays.com/…/schedule-at-a-…/

We will be riding out to the newest bike shop in town, Bear Dog Bicycles (http://beardogbikes.com/) in the North Side.

Sometime, I’d like to see a Flock ride go up past Randyland. It’s not all that far from where we’re headed, but it is up a bit.

Some other time, some intrepid group should try climbing up to Aryn’s new shop on Burgess Street. Burgess of Suffolk-Hazleton-Burgess, i.e., Hill #7 of the Dirty Dozen, as in, the top of said hill, about 400 vertical feet above Western Ave. But if making it up to Randyland is testing the limits, Burgess is possibly an order of magnitude more difficult.

Burgess is probably out of the realm of possibility for a Flock ride.  But Randyland is a possibility, although we usually try to avoid such residential areas.  I’ll look at it, either for this month or a later ride.

Randyland may be in a residential area, but it’s not exactly on a cul-de-sac: Arch St mostly feels like a through street. I’ve been on organized rides that went that way (including a stop to visit w/ Randy) and I get the sense that the area sees a fair amount of random bike traffic. So not a big deal. Hey, maybe Randy might have a night off and come out to say hi to the riders…

Burgess, as in Dirty Dozen, is probably a bad idea even if you attack it from the top (are you proposing a brake clinic as part of the ride?). I didn’t know about the Aryn shop but getting there (e.g. up Perrysville) I think is not what Flock is about. Darn geography…

The Flock ride was never gone this winter.

On January 20 and February 17, there were rides -albeit small –  that started at  started at Dippy somewhere around 6:30.

Well, I think we can attack both Burgess St and Randyland in one ride just in less than 20 miles. We can go a little bit out for a gentle climb to the Observatory Hill, regroup at the top (water fountain and portapotty) and then, basically, it’s a roll down from there.

This past year, on the 90-neighborhood ride, I was in a group that included someone whose brakes failed on a long downhill. With a trafficy street at the bottom. It could have been a serious disaster but thankfully wasn’t.

Mikhail and I would treat this ride as pretty routine, maybe even boring. But that’s not what the Flock thing is about. It would be (very) cool to do Randyland, particularly as it’s a destination. But why not then turn around and head back? That’s a lot of Flock miles already. And the point is to be open to people who aren’t necessarily into all this serious biking thing and just want to have a fun ride, hanging out with like-minded others.

Up Perrysville (with an up Federal option for the hardcore!) followed by a tear down Burgess/Suffolk and an exciting roll down East St, exchanging middle fingers with high-speed suburban SUV drivers. I’m down with that. But it’s not really a great introduction to urban biking.

We don’t need to go “Up Perrysville”. :)  We are going to go in the opposite direction!

Arch Street lines up with West Commons around Allegheny Center. One of the great things about Flock rides, particularly in the early days, was learning about how to get around on bike, finding the little alleyways and cut-throughs. So, getting from Randyland would be as much a useful learning experience as going to it.

I’m not serious about making the big climb up to Burgess St via Perrysville or Federal, though the long climb up through Riverview Park has been done a couple of times, one of them a Flock or Flock-affiliated ride.

May be not european…