Vote on a bike rack sculpture for the Cultural District

Link will take you to the proposals and how to cast your vote.

it doesn’t say it in the link, but they will be producing only one of each of the chosen racks, so it’s not like this will be the design for the whole cultural district

Does that mean we could have bought substantially more U racks than point racks?

Also, Erok, are yo saying that they will produce at least one of each rack and then multiples of the “chosen” rack? The link says

“Help decide which bike racks designed by local artists will appear in the Cultural District streets. ”

So I’m kind of confused

yeah, it’s a bit confusing. the cultural trust is working with a grant to produce 5 one-of-a-kind bike rack sculptures. they received a number of proposals. A committee picked 2, and the other 3 are being left up to this voting process from the public.

Sooooo, the top 3 racks on this list will get produced and installed. One of each.

As for your other question: by point rack, do you mean the “three rivers rack?”

Has the committee already picked two designs listed or are those not included in the list of linked designs?

Can we just have 3 of the covered racks?

the committee picked 2 that are not listed.

When the city started installing the 3rivers racks, they were much cheaper. at the time they were approx 2:1 in cost, (so yeah, there could have been more) but they really really wanted the 3 rivers racks. Over time, the cost rose on the 3rivers racks, to the point of about 4:1 (it’s a bit cheaper in bulk). that’s when the city basically stopped ordering them, and instead moved on to the much cheaper U racks, which i was happy they did.

jonawebb: nope. not for this project

I like the bridge one. I feel like the covered one will be ‘repurposed’ by people on the street as a bus shelter in inclimate weather.

I also don’t like lifting my bike up on to the rack, which is why I’m glad trader joes still has the normal 3 rivers racks instead of just that hanging style one.

Benzo wrote:I like the bridge one. I feel like the covered one will be ‘repurposed’ by people on the street as a bus shelter in inclimate weather. I also don’t like lifting my bike up on to the rack.

Yes, I love them all except that one, a short, clumsy person *POINTS AT SELF* will wind up smashing her teeth in with her own bike trying to hang it in that rack.

yeah, that one could be awesome if it wasn’t the hanging kind, but you could just lock to the bars that reach all the way down to the ground.

When I’m on my super sexy, semi-vintage road bike, I like to carry a mini lock. Sadly, it does not fit around the U-racks. Any chance of having the U-racks made of slightly narrower tubing, just for me?

I stopped using a mini-U since it was such a pain in the ass. If I ever see evidence that thieves around here are actually doing these “jack attacks” maybe I’ll go back but full-sized U is so much easier and on a good rack I can get frame + wheel.

how mini is your mini u lock? i’ve been using an on guard mini for years and it seems to fit around 90% of the things i attempt.

It’s an onguard mini. It wasn’t so much that I wouldn’t be able to lock up at all, but it took a bit more playing around to get the bike positioned where it needed to be and it was definitely harder or impossible to get both the wheel and frame. For a while I used the Sheldon method which worked pretty well.

So, one time I went out and forgot my lock and instead of running home I just decided to buy another lock, the wife needed one anyways. Within a couple weeks I switched to the bigger lock – it’s just a little easier and more forgiving when you’re forced to lock to weird crap like the trash can outside Gooski’s, or locking to a rack with another bike on it.

some cool looking racks… but I question how functional they are. Only the bridge one seems to be both functional and aesthetically pleasing (to me).

Yeah, I voted for the bridge for that reason… Some of them look cool but don’t look practical to lock to, or not very secure due to thin sections.

Honestly, if I didn’t see a picture in this contest, I wouldn’t even know that the covered rack(Joshua Caputo & Elise Walton), the tentacles(Vaughn Washburn), or the spiraly noodly (Colin Carrier) were a bike racks at all.

I’m also not sure if several of these artists even know how to properly lock a bike with a ulock, since the design mockups seem to show bikes in positions that could never be locked securely. None of the mock ups are even shown with bikes locked (except the pipes one, that shows 1 of 3 bikes locked with a ulock and is one of the easier to lock to designs)

The one that is made to look like bike wheels (David Calfo) shows bikes all in a position that you could really only have the front wheel locked to the rack. Though, you could probably lock 3 bikes up here securely if you didn’t follow the design mockup’s idea of where to position the bikes. Though, the rack could likely be damaged very easily due to the materials used.

The spiraly noodly (Colin Carrier) seems to accomodate 6 bikes, but I doubt you could securely lock that many to it, especially if it’s near the curb. It also appears that it would take up a huge amount of space on the sidewalk.

The bridge (Will Schlough), covered rack(Joshua Caputo & Elise Walton), and the pipes (Keny Marshall) seem like you could actually lock to them easily, but won’t hold more than 2 or 3 bikes, and that’s ok.

For what it’s worth, the RFP said the bikes must lock a minimum 2 bikes, and be able to use a standard U Lock with it.

As far as sidewalk space, the Cultural Trust is locating them, and may have some spaces that are actually just off the sidewalk. 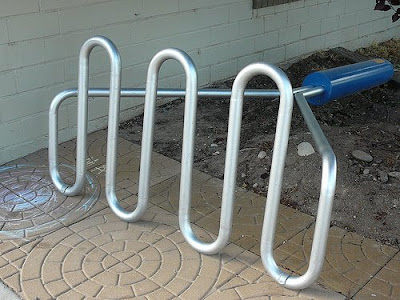 erok wrote:how mini is your mini u lock? i’ve been using an on guard mini for years and it seems to fit around 90% of the things i attempt.

I have a Sunlite mini lock (can’t find the Amazon link) that has ~2.5″ between the shackle ends, and it’s only ~3.5″ long. It fits nicely in my pocket, it was cheap, and it fits around 3 rivers racks and most street signs. It’s just not wide enough for use with the U-racks.

I only use it with my road bike, for brief stops, when cargo space (i.e. space in my pockets) is at a premium. I guess I could upgrade to a proper mini lock…

Hey, let’s get these instead: 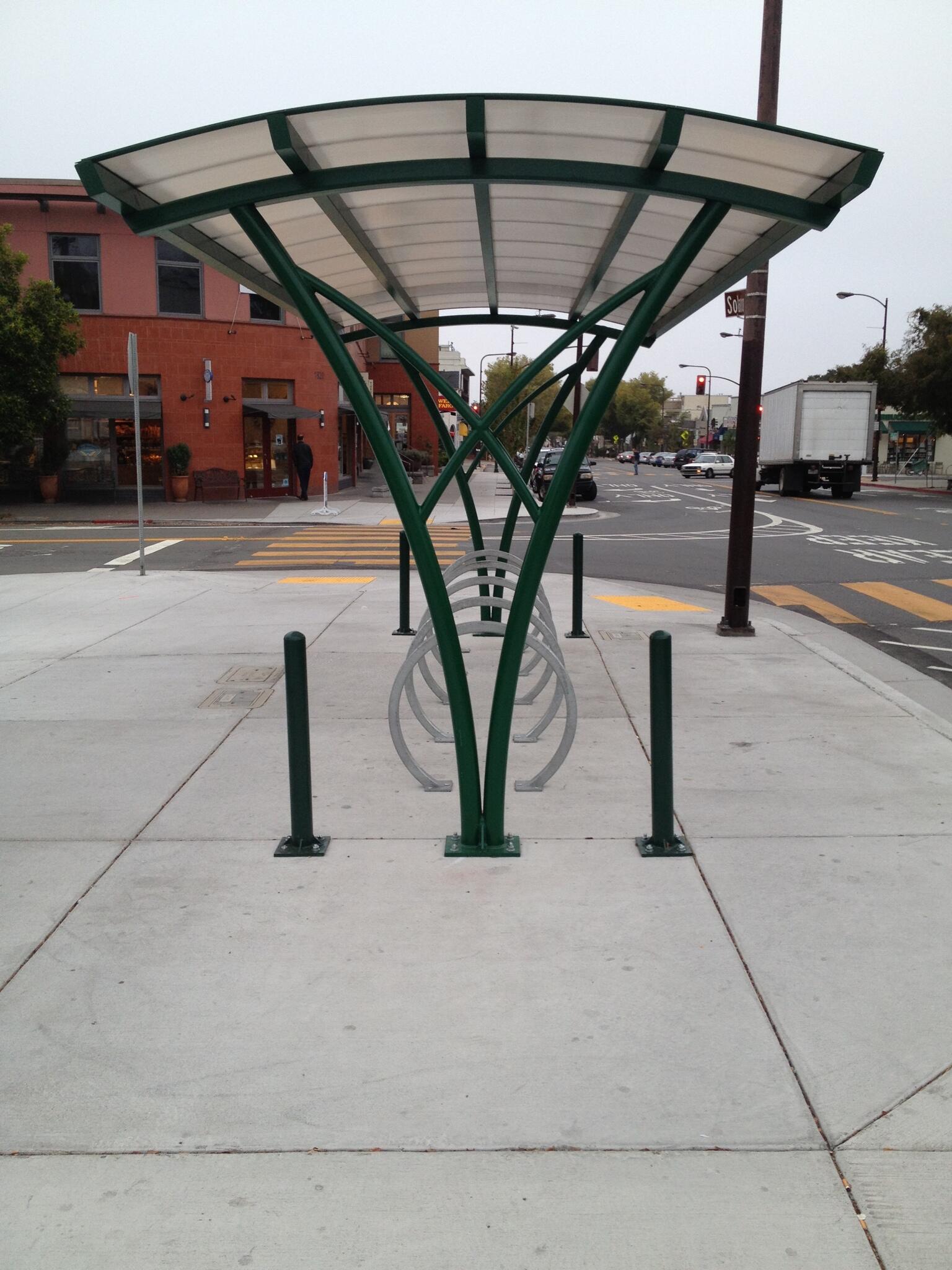 jonawebb wrote:Hey, let’s get these instead:

I like this one as well, but the canopy is way to go!

They’re starting to go in! 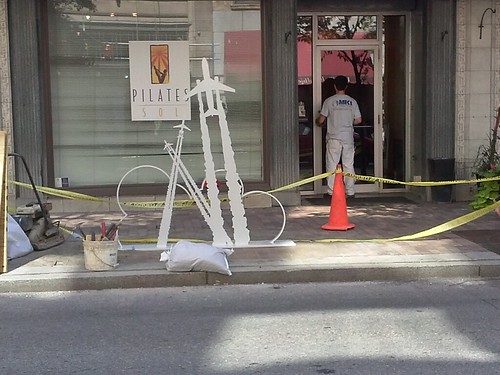 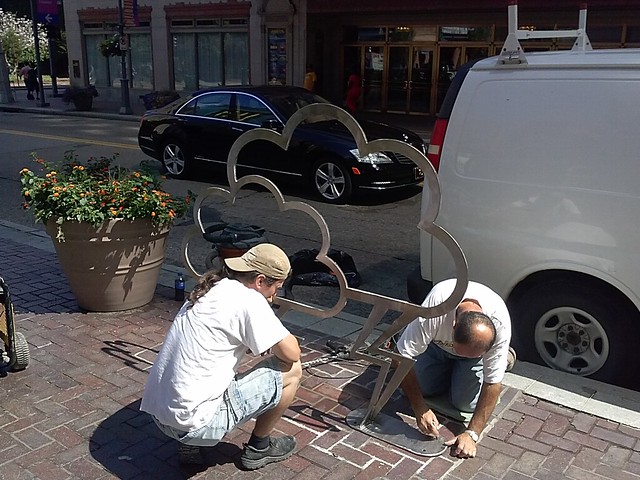 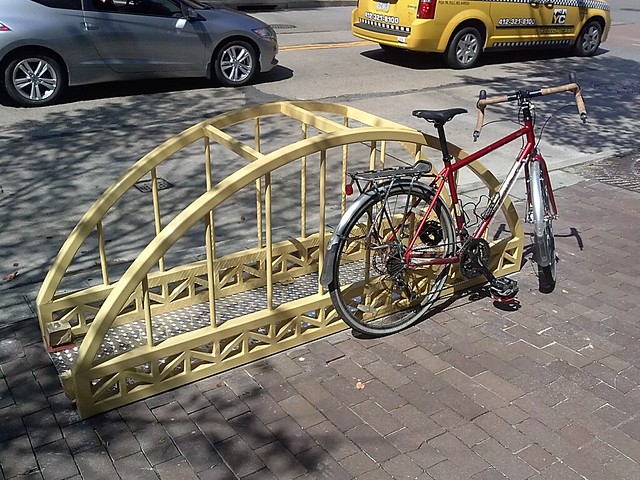 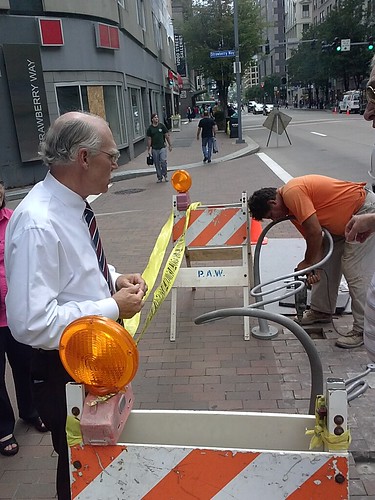 Ours are better than all of those, except for the Wright Brothers ones. Those are really cool.
Don’t forget David Byrne’s annoying bike racks (skewered by BSNYC) outside BAM: What @jonawebb said, those racks are awesome. Vanity is the quicksand of reason

A standard bike rack, is what every cyclist prefers. Unfortunately racks like this are not sexy if you the BCGP asks you to donate money. So instead they have installed and are raising funds for additional art racks, known as “Gilded Gates”, at an estimated cost of $3215.00 per Gilded Gate

From a sheer utility standpoint, I really like locking up to the Three Rivers racks, also the ones by the Eat N Park down by Waterfront. I’ve noticed that more of the restaurants down there have added bike parking for trail users, although some half-heartedly (I’m looking at you, Pizzeria Uno w/ that toaster rack chained to the tree…at least I think its Pizza Uno).

The Cultural Trust has begun the next phase of installing these I kinda love this one. Also, you may have noticed that the corral on 10th at Liberty has been removed. It will be replaced with a sculptural bike corral that looks awesome

Yep, I noticed that the bike corral had been removed. At first I was all, “WTF? That corral gets a lot of use!”. Then I remembered that these new ones were being put in. Good to hear that it’s awesome :-)

Here’s a few more. I really like the tube sock Glad.to see some of the racks made it onto the cross streets instead of just Penn and Liberty.