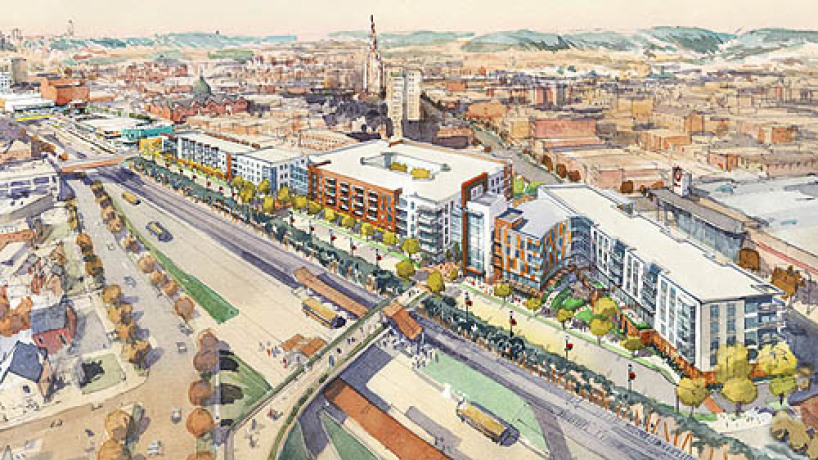 A rendering of the future East End Transit Oriented Development

Those who do not remember the past are condemned to repeat it. Certainly wise words that an editorial in today’s Post-Gazette subtly references as it attempts to point to a failed attempt at making the business district of East Liberty a pedestrian mall as the reason why East Liberty foundered in the latter part of the 20th Century. This could be the subject of a PhD dissertation so my post won’t begin to do this topic justice. However, it’s fairly widely acknowledged that it was the entire plan of trying to suburbanize East Liberty and prioritize cars—the tearing down of hundreds of beautiful buildings in order to make a ring road (Penn Circle) and a dozen or more surface parking lots, not merely the pedestrian plaza—that failed the neighborhood of East Liberty.

Urban renewal, a planning practice that famously prioritized automobiles over the historic, dense, walkable urban fabric of our neighborhoods, is viewed by most urbanists (if not most people) as a disaster that cleaved neighborhoods, destroyed priceless buildings and public spaces, made neighborhoods more car friendly at the expense of making them more people friendly, and left them a shadow of their former selves. Just watch the heartbreaking slide show below to see what kinds of destruction was done to Pittsburgh in the name of urban renewal. Count how many of the buildings were torn down to make room for parking (I warned you, it’s heartbreaking).

Although the Post-Gazette’s blame for East Liberty’s troubles was a bit off the mark in its simplicity, its heart is without a doubt in the right place with its ringing endorsement of the plans for the East End Transit Oriented Development that Mosites Co. is pursuing. We too at BikePGH are happy with where the plan is going, and we are at the table discussing how best to link this development to the city’s developing bicycle network. Our future is a multimodal one, some trips requiring cars and buses while many making increasing sense to take by foot or by bike. It’s wonderful to see a multi-million dollar development, funded in part by the federal government, acknowledge this simple fact.

Not a member of BikePGH? Join today! We need you! Bike Pittsburgh works to protect cyclists’rights and promote the vision of making Pittsburgh a safer and more enjoyable place ride and walk. For more info, visit: www.bike-pgh.org/membership